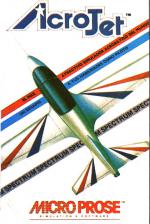 Ever wanted to be a stunt pilot? Well here's your chance, courtesy of MICROPROSE - the simulator specialists. Up 'til now, the company's efforts have been confined to the Commodore, but at last - starting with Acrojet - they've begun the process of converting their titles to the Spectrum.

Acrojet contains ten events which can be played by one to four players, and these involve flying a BD5J Acrojet around, through, under and over a series of obstacles. There is also a design-it-yourself section, where two or more opponents can design courses and tasks for each other, and then judge each other's performances.

The first event, THE PYLON RACE, consists of racing around four pylons as quickly as possible, and then executing a successful landing. Event two is a SLALOM race which involves the same four pylons, this time flown in a 'figure eight'. The next event is the RIBBON CUT where you use the plane to break two ribbons suspended at 150 feet. After that comes the INVERTED RIBBON CUT - the same stunt flown with the plane inverted. Event five is the RIBBON ROLL: two ribbons are suspended in a row - the aim is to fly under one and then executes a complete roll before going under the next ribbon. That is followed by the UNDER RIBBON RACE: this is a slalom course where three ribbons have to be flown under in sequence. The seventh event is an UNDER RIBBON LOOP: the plane goes under the ribbon, performs a loop, passes over the ribbon inverted, and then descends the back half of the loop to pass under the ribbon again. The next event practices SPOT LANDINGS; the pilot flies up to 2000 feet, and then lands on the runway as close as possible to a marked spot. This is followed by FLAME-OUT LANDINGS, which is a similar stunt, performed without the use of engines. Finally there's the fancy CUBAN EIGHT: this consists of a half-loop over one ribbon, followed by a half-roll, and another half-loop to go under another ribbon before finally finishing with another half-roll to go under the first ribbon once more.

At the beginning, a pilot can decide on how severe the weather is going to be, and what performance he is likely to get from his jet. Sluggish performance is helpful to beginners, but for the experienced pilot, real-time performance helps with some of the trickier stunts.

The screen gives a 'behind the plane' view of the Acrojet. This shows the jet's bank and climb, as well as giving some indication of height by use of a shadow. The view can be switched to the sides or the rear - useful for lining up the jet with the runway, or for checking that an obstacle has been passed.

An instrument panel below the main view contains a series of read-outs. A compass gives your heading while an altimeter and vertical velocity indicator indicate height and show whether the jet is going up or down. A display shows the event which the jet is performing and reveals the obstacles to be negotiated and the jet's position. An artificial horizon gives the pilot an idea of his attitude, and indicators monitor the status of wheel brakes, air brakes and the undercarriage as well as revealing the amount of flaps in use.

The throttle has settings between 55 and 110 per cent thrust. Engine power above 95 per cent causes the engine to overheat. The engines fail if they run above 650 degrees for too long, or break down immediately if the temperature rises above 700 degrees.

'I can't really say that Acrojet appeals to me; then again flight simulations usually don't unless there is a good bit of blasting involved. The game is technically quite good - the plane is very manoeuvrable, so it is quite easy to complete the first couple of events (once you've waded through the huge instruction page). The graphics are quite a step forward for a flight simulator - you can actually see your plane on screen. This is very good as simulators go, but I'd only recommend it if you are well into this sort of game.'

'I loved Acrojet from the first time that I picked up the joystick. The graphics are fairly simple wireframe objects, but the way that they react to the realistic movements of your plane is very impressive. The B05J Acrojet performs beautifully, and is very responsive to frantic joystick movements - as when trying to pull out of loops without hitting the ground. The menu options are easy to use and well presented. I loved Acrojet and found it very addictive, although as people seem to be wary of flight simulators I feel that it may not get the success it deserves.'

'Acrojet is a very good simulator. Maybe it doesn't reek of accuracy, but it sure is playable! Some (indeed most!) of this type of game are very boring and unrealistic - or ridiculously accurate and very unplayable. Acrojet has 'a reasonable share of both type's problems and advantages. The graphics are quite good, and the rear view gives a nicer sense of flight than the normal cockpit view. It sounds daft, but there you are! The amount and variety of tasks makes this most addictive. Despite not being very original, Acrojet is one of the best flight simulators so far.'

Despite not being very original, Acro-Jet is one of the best flight simulators so far.