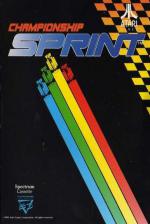 Hands up all of you who enjoyed the original Speccy Super Sprint? Hmmm! not an awful lot it seems. Alright, hands up everybody who thought it good value for money? Even less I would have thought.

Good news. Electric Dreams, for reasons best left to its marketing managers, has released a follow-up entitled Championship Sprint. The 'Super' may have been hacked off the title, but CS is a superior package, thanks to the welcome inclusion of a track designer on the flip side of the tape.

True, the 'A' side appears to be more or less identical to the original Super Sprint (a selection of tricky tracks and a dreadful start-up screen), so owners of that game will feel a mite peeved off if they think they are forking out for something new. But the 'B' side is where all the real action takes place. This is the Championship Sprint Course Construction program, and now you have the chance to experiment with totally wild designs, and pit in as many features and obstacles as can be safely fitted onto the track.

Using the track designer couldn't be simpler, (and that's a great help to a simple person like me). Everything is icon controlled in the best way possible. So a series of icons run down the left hand side of the screen, while the main part of the screen is taken up by the design itself. Moving your cursor and pressing fire drops a section of track onto the screen. This can then be shifted around at will, positioned or removed. It's all up to you really. If you have ever messed about connecting bits of Scalextric together you should have a pretty good idea of what I mean.

Once your wacky designs are complete and everything checks out okay, save your custom creations and load them into the 'Racing' side of the tape. Select the custom tracks option and away we go. Up to eight new tracks can be loaded, but if you get bored with those, there's nothing to stop you having a crack at designing a new set.

Championship Sprint is much better value than the overpriced and un-rewarding Super Sprint.

Even so, all the old niggles about poor control and dodgy sprites are still here, which is a pity. The programmers have had the chance to improve all those things that let Super Sprint down, but seem to have been concentrating more on the construction aspect than on the gameplay.

To sum up (M'lord). If you really enjoy this type of racing game go for it, but just because some of the tracks have been custom-built, don't expect an easy ride - the computer-controlled cars never give up without a fight. Fans of the original Super Sprint will enjoy this, but if you already have that game, forking out another tenner for what is little more than a glorified track designer, may force you to think twice.

Super Sprint part two. More of the same plus an easy to use track designer program on the other side of the tape. Recommended for fans only.

Fans of the original Super Sprint will enjoy this, but if you already have that game, forking out another tenner for what is little more than a glorified track designer, may force you to think twice.