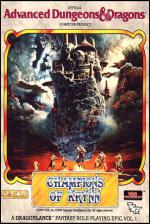 Krynn has had a rough time of late, what with the Queen of Darkness trying to overthrow the land, and Raistin Majere - a one-time friendly mage - almost destroying the kingdom when attempting to become a super god. Fortunately, the last few years have been disbanded and it is only knights who, from their strategic outposts, remain permanently vigilant against evil doings.

However, rumours of Draconian devilry are spreading (again) and as Krynn's armies are no more it's up to ordinary folk to patrol Krynn and report their findings. Unfortunately, as the plot thickens the evil grows and eventually only you and your party are all that stand in the way of evil tyranny.

A party of characters is formed at the start of the game (or should you be in a hurry, you can use the one SSI prepared earlier). Attributes include Class, Gender, Hit Points, Armour Class, and so on. A graphic depiction of each member of your party may be subtly changed (colour of armour, weapons, and hair, for example) so you may distinguish between characters when in animated combat mode.

Controlled is with keys and joystick, via options displayed at the bottom of the screen. Each scenario is depicted in a different fashion, but all feature very nice pictures (except for your being shown as a square dot when travelling over land). The number of options available to you are many and diverse (especially in combat, although you can let your computer take over for you here).

The first thing I noticed about Champions Of Krynn was the awful title music, thankfully the stab of a key gets rid of it. Gameplay is very similar to Curse Of The Azure Bonds (another Dragonlance RPG) but this is no bad thing, although play can get a bit annoying from time to time: ONE (I emphasise one as I could only see a single enemy in the graphic window) guy wouldn't let me into the town of Throtl, so I decided to attack and teach him a lesson. However, when the combat screen appeared I found there were actually about 20 hobgoblins facing my party of four - it was trouser-changing time. Luckily, one can run away when faced with such an impossible situation.

Apart from the fact that only one saved-game position is allowed per character disk, Champions Of Krynn is an excellent RPG featuring magic, puzzles, death, an intricate combat system, depth and a very large play area. It seems better than all previous Dragonlance releases, but then maybe I'm just getting used to them. Whatever the reason, I think Champions Of Krynn is a must for your collection.

A must for your collection. It seems better than all previous Dragonlance releases.