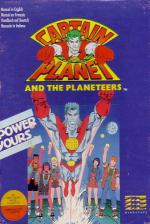 He's here and he's the saviour of the world. He's Captain Planet and he won't stand for any rubbish! And neither will any of the Crew here. We're all further out of this world than ol' Captain Chairleg will ever be.

Yes, it's Captain Planet's lot in life to try to defeat those dirty dastards of the environment. Sly Sludge, Looten Plunder and the notorious Dr Blight (who used to kick footballs into my mum roses and then let ME take all the blame) At his disposal (arf!) are the powers of earth, fire, wind, water and heart.

Play begins with the Captain flying through a starfield where by avoiding the stars and flying into the clocks he picks up a time bonus which is added to the time he begins with at the beginning of the game proper. This ticks down as he battles his way through the level and once his meter runs out, he's recycled back to the start.

Flying and running (using no high octane petrols), from left to right, Captain Planet has his own method of making the environment clean and involves scooting along and Mr Sheening everything in sight. In level one, Sly Sludge is found using CFC balloons and rockets to destroy the earth's protective ozone layer. He plans to turn the whole planet into a huge sun resort so that he can build lots of hotels and beaches. This sounds very much like the Spanish Tourist Board to me and as such, the Captain has my complete approval.

To get to the end of the level in order to confront the first of the three enemies of the environment, Captain Planet must cleanse everything that attacks him, collecting bonus points for collecting CFC balloons and destroying missile bases. Further levels have Looten Plunder stealing all the world dolphins for his evil experiment (booo!), and Dr Bight setting fire to the rain forests in order to take up plutonium mining.

The game is far too simplistic. Unfortunately, earth, wind, fire and water power are all combined into a shower of stars that are shot towards the enemy. Lightning icons that are picked up work like a smart bomb and cleanse everything on screen.

The effect of this? What you're left with once you've taken the licence away is a remarkably average shoot 'em up, that carries little excitement and dulls very quickly. Although quite fast and with reasonable graphics, Captain Planet, the game that was expected as being clean, green and mean has turned out to be not much better than the rubbish that Captain Planet has to handle every day.

The Captain's exploits on T.V. are highly popular but I'm afraid the game itself should been made out of something more recyclable because, Captain Planet may clean up the Earth, but all that time in rubbish has to rub off.

The Captain's exploits on TV are highly popular but I'm afraid the game itself should been made out of something more recyclable because Captain Planet may clean up the Earth, but all that time in rubbish has to rub off.