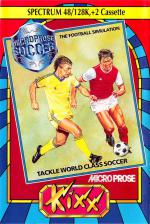 Here we are in the heart of the football season and whadaya know? The shelves are bristling with footy re-releases and that's just why Microprose Soccer shouldn't get into even the second round of the cup.

"That's a little harsh, Garfy" I may hear you say but just listen. When Microprose Soccer first stepped onto the pitch, it was set above all other available football games because of its wealth of options. You can play league, international or even World Cup games and you can play simultaneously against friends in leagues with the two player option.

There are variable strength banana shots, selectable lengths of halves and even an automatic action replay of all the goals. And just to make the realism complete, there's an option to turn the weather off or on, which, accurate to British weather, almost guarantees a quick downpour ever during the shortest of matches.

These are, without exception, excellent options and the banana shot has become a standard requisite of all football games since. So why does the game go offside as soon as you start to play?

Well call me a Saint, call me a Gunner, but the one, absolute necessity for football games just isn't there. There's no real playability. Whilst the graphics, seen from overhead, are clean, crisp and businesslike, the control just isn't. It's like controlling a player through a curtain of sludge; you press the fire button, wait for a bit and then the player hits the ball.

It's this overpowering sense of reluctance on behalf of the players that you're controlling that takes a match winning concept and just throws it all away before the final whistle. Despite all the options available this the game lust doesn't gel from a playability point of view. This is a pity, it does look so good at the beginning.

There are much better budget soccer games around at the moment, and I couldn't recommend this whilst there are games like Manchester United about. A good game to play with a few friends but you'll soon tire.

There are much better budget soccer games around at the moment, and I couldn't recommend this whilst there are games like Manchester United about.