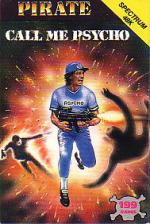 Holding the world to ransom for £100 million, 20 BMX bikes and a bucket of shiny pebbles is all in a day's devilry for that atrocious academic, Professor Hans de Jaberwocky.

But his threat to gungify all those not wearing protective clothing is sufficient to spur Psycho, the humanoid droid, into altruistic action.

If this minor mechanoid is to save the likes of you and me from conversion into so many bowls of Bird's Dream Topping, Psycho must combat the robotic opposition created by the degenerate don.

This clique of dangerous devices includes Edgar, unarmed but with feet and hands that have been graded as lethal weapons by the Bognor police department; Grez Bret, a gun-toting 'bot; Bazooka Fred; and loony Chris.

Psycho must not only do his best against these unpleasant constructions of circuitry, but must also avoid the missiles, preprogrammed tanks, time bombs and mines that litter the place. To touch any of these induces in the droid a nasty attack of death, and he has but three lives.

Our daring rescuer can get some help by picking up the assorted weaponry - a pistol, bazooka, M-16 rifle and flamethrower - that he finds. Each weapon has a limited supply of ammunition, but Psycho can increase this by touching extra arms caches.

Points are awarded for every opponent that Psycho consigns to the scrap heap, and the running total is increased by collecting junk food, milk shakes and emptied lager cans. Releasing prisoners swells the total even more.

Given a little personal living space, Psycho can begin to dismantle the series of doomsday devices that threaten our molecular stability. He does this by shorting each mechanism's power supply.

Once this is done, the heroic droid can make for a friendly submarine to discover the location of the next device. But should Psycho try and beetle prematurely to the sub before he has deactivated a device, he is penalised for his precociousness and is returned to his starting point.

'Perhaps this game should have been called Call Me Cobra, because it sure seems the same as Ocean's game - well, graphically anyway - even down to the hamburgers and megaweapons. And this conceptually boring game adds nothing new to a well-worn mindless genre. The gameplay suffers mostly from unresponsive controls and slow animation, both of which reduce its addictive qualities. Surprisingly, with games of this type a fair amount of thought is required when jumping around the platforms, and a map would be very useful.'

'This is a real waste of time. The program is full of bugs and the gameplay is pathetic. The sprites have been badly defined and after a while it gets hard on the eyes. Call Me Psycho looks like a homemade job, and a very bad one at that. There are now so many games of this genre that when another one like this comes along it is simply a waste of time and money.'

'Call Me Psycho makes a refreshing change from the rest of the shoot-'em-ups we've had this month. It isn't the wildest thing I've seen recently, but playable, reasonably addictive games at this price are not readily available'

A real waste of time. The program is full of bugs and the gameplay is pathetic. Looks like a homemade job, and a very bad one at that.