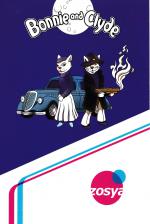 Eminem put it best when he rapped: "Whatever happened to whilin' out and bein' violent?" I suspect he wasn't rapping about the state of Spectrum software at the time but, if he'd seen to what extent the scene had been beseiged by cutesy platform games, he well might have been. Thankfully, zosha.net have come to reintroduce bullets, bombs and some sweet black and white rag to the format with Bonnie And Clyde. And rather good it is too.

The premise of the game is a like an easier version of the classic Jet-Pac. There is a simple configuration of platforms on a single screen, and a patrolling Bonnie at the top of it throwing out items which gravity propels downward. You have control of the villainous mobster Clyde, carry a machine gun loaded with bullets and must wait for Bonnie to throw a bomb, grab it, take it to the safe and wait for it to detonate. Whereupon a ladder will appear to the top of the screen, and you'll go on to the next, tougher, confrontation. The safe is not always visible on every screen from the get-go; on many it only appears after you've collected up all the dollars littering the platforms.

You get a generous amount of lives (nine!) and you can scoot around the platforms on each screen, blasting other mobsters, jumping to avoid the bullets they fire in return and collecting anything that falls from above. The only thing you really must remember to do is to blow up the safe and climb the ladder before time runs out. You get a nice breakdown of your scores each time you escape intact.

Like the classic Jet-Pac, there's something very addictive about the game itself. It's so easy yet, at the same time, so enticing. If anything, Bonnie And Clyde is more enticing... not because of the splendid Thirties tunes in the background and not because of the better graphics and smoother control. It's actually a much more varied game per se, with each level not only being slightly different to the previous one but introducing some backgrounds such as a train station, a field, a hotel and a casino.

There's not a great deal more to say other than this is definitely worth a good half-hour of your time. I get the impression the screens go from easy to suicidal as it progresses but, to relieve any frustration you might have when your mobster draws his last breath, every five screens the game emits a code that can be used to skip to that point in any future attempts.

Altogether, great stuff and yet another brilliant game in a startling new run of software from zosha.net. I think they must be bringing these titles back from a parallel universe!