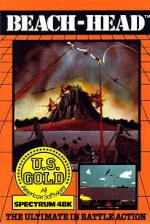 This is the first game I have seen advertised as "all American software" and I hope it's not the last. Once loaded, you go through the usual preliminaries: redefine control keys (a good feature), choice of joystick, and skill level, etc.

For one or two players, this game begins with a map of the general area. A formation of dots shows the enemy fleet position, flashing dots indicate your position, while a flashing square indicates a hidden passage. Should you choose the passage, you must navigate rocks, mines and torpedoes.

My favourite is going straight to the enemy position. This pitches you into a battle against enemy bombers which take off from both ends of distant aircraft carriers. Your defence is a pair of guns in front of you which move left, right, up and down, and of course, fire. Altering the elevation will alter the range in a very realistic manner.

Having gone through that phase you then have a battle against enemy ships. The final phase is the battle for the beaches, against tanks. Very positive response to the keyboard controls, and a very addictive game. Super!

Super! Very positive response to the keyboard controls, and a very addictive game.