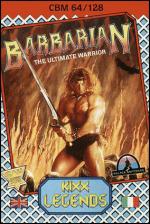 A young lady who looks like Maria Whittaker, but calls herself Princess Mariana, has been kidnapped by the evil mage Drax. It's up to you to rescue her.

Outside Drax's castle, you engage in sword fights with his guards using 16 different moves, accessed using joystick direction and fire button. Offensive moves are head-butt, kick and a selection of sword moves, each of which wears away a unit of the opponent's energy if successfully executed. Each fighter can take sixteen blows before dying, but at any time a well-aimed neck chop can separate a fighter's head from his shoulders, at which point he isn't too keen on continuing the battle.

A single player works his way through increasingly difficult opponents til Mariana is saved, but there's also a two-player option to enable two consenting friends to hack each other to pieces.

Barbarian is unrestrained, almost gratuitous violence, which is a good start, and is backed up by sharp controls and quality graphics. Though hardly spectacular, backgrounds are pleasantly drawn and go some way to setting the fantasy scene, but despite their black-outline blockiness, it's the sprites that steal the show. Fighter poses are realistic, smooth animation dynamically portrays combat, and the mean little goblin who drags away each corpse adds humour to the hectic action. There's no music but plenty of atmospheric pseudo-sample effects to enhance the visuals.

As a single player game, Barbarian has plenty of hack 'n slay fun on offer and there's lots more playability when decapitating a friend - at a mere three quid it deserves a place in your software collection.

While animation is a little jerky, the detail and variety of graphics is superb.