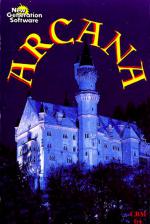 Tonight was the night that Valarequil had been waiting for, the autumn equinox better known as Shedding-Moon Eve. For tonight is the only night that the Dark Clavicle - a book of the blackest magic - can be opened. Valarequil, King of the North Lands and already evil, is looking to develop his knowledge even further. The elves of Estarion are aware of the significance of the date and that is why they have asked you, Baludar, to break into the castle Arcana and find the book and destroy it.

So it is that you find yourself on the castle ramparts with only two and a half hours remaining before the moon rises. The elves have given you a supply of magical bolts with which you must try and defend yourself. All you know is that the book is guarded by seven mighty demons and that you will need a talisman to get past each of them.

You are already in a quandry. Do you go left or right? To the left are a couple of locked doors followed by an open one, but you must fight off some flying monsters. To the right is another door, apparently locked, but which yields to a few blasts of your magical energy. However, you must first run the gauntlet of the archers shooting at you from their turrets.

Once inside the castle, you find yourself in a corridor with junctions and rooms leading off. If you turn a corner, the picture redraws itself so that you are always in a left-to-right corridor. This can prove a little confusing at first, and some careful mapping is required. The corridors are protected by giant wasps and some flying imps. The imps are fairly easy to destroy, but the wasps are a real nuisance, buzzing around your head and depleting your energy on contact.

Apart from the maze of corridors, there are thirty special rooms to be explored. These are invariably protected by various evil minions, such as ghosts, and are likely to contain something of use of you in the furtherance of your quest. If a room is empty, the chances are that you will need to do something else first and return at a later stage. The 3D graphics work very well here as you find that you can't walk through tables and chairs in order to escape from the beasts.

The game looks in style like one of Ultimate's Pendragon titles but it plays a lot better. It is easier to explore and you don't have to tackle the problems in a set order at the beginning of the game. All in all, a highly addictive, well-worked arcade adventure.