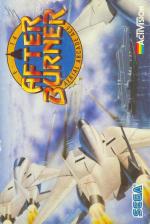 Verrroom! Swooooshhhh! Kerblaaaaammmmm! Er... KERSPLOSHHHH! And any other sound effects you can think about. Afterburner is here, and it's just as spectacular as it promised to be. After months of previews, teasers and tickles, the official conversion of the best-selling coin-op from Sega has arrived.

It was with trembling legs and dribbling chins that we loaded Afterburner and prepared to put it to the test. Would it be the most amazing convo ever? Or a complete load of old sausage-meat? Fortunately, it's better than we could have expected; just about as close to the coin-op as the Spectrum can manage.

Not much has been left out of the gameplay. Let's face it, there wasn't much to leave out. Afterburner was never about complex gameplay; it's just about zooming through the skies, gawping at the incredibly fast, detailed, colourful graphics, and blowing to hell everything that moves. All these elements are still there, bar the colours.

As your F-128 sooper-dooper transonic interdiction fighter lifts from the deck of the Sega Enterprise, you feel that you're in for something special. When you lift into the air, the horizon suddenly fills with enemy planes, and you know that you have a fight on your hands.

The speed and smoothness with which your targets come out of the distance has to be seen to be believed. Your cannon fires continuously; you just have to line up your sights, dipping and veering to keep on target When the LOCK ON notice appears on the bottom of the screen, your guided missiles have selected a target. A cursor box appears around the doomed enemy plane, and by pressing the fire button you can launch a deadly missile.

Your speed, and remaining stock of ammunition, are shown at the bottom of the screen. At the top is shown your current score, as well as the stage of the game you've achieved The first stage is relatively easy; the targets almost line up to be zapped. As you progress, though, you find yourself facing waves of missiles. The best way to avoid these is a quick barrel-roll; move the joystick over to the right or left, then give it a quick nudge. Your plane rolls alarmingly, the horizon spins around you, and with any luck you'll avoid the missiles. If you don't have any luck, your plane goes down, trailing what look like soap bubbles, which I'm sure are meant to be smoke rings.

If you survive through stage one, you'll rendevouz with a tanker which will top up your fuel and ammunition. Then it's on into the unknown, with a different coloured background, new types of planes, and a faster, more furious fight.

You must select music or sound effects during the game; the music's a jolly bouncy sort of affair, while the sound effects include some nice metallic bonglings and swooshings. The overall impression is of a game which is more than the sum of its separate parts; hence the rather strange marks in the faxbox.

If you survive long enough, you'll get to see the Super Hang-On motorbike chasing you off a landing strip, an Outrun sports car and a Thunderblade helicopter. Nice to see that the programmers had enough memory space to get all the jokes in - of course, this means that the game has to be multi-load, or use continual disk access.

OK, there's not much to Afterburner; it's just continuous, spectacular blasting. Don't let that stop you investing in what must be one of the big hits for Christmas.

Top-class coin-op conversion destined for the top of the charts.

Top-class coin-op conversion destined for the top of the charts.