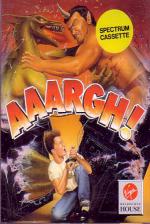 It's not easy being an ogre. Not in this Arcadia coinop conversion, anyway. Come to think of it, it ain't that dandy being a dragon either! These are the two monsters that have been chosen to battle against each other In The Search for Roc's Eggs.

The eggs are hidden in the towns and cities of the eland of Darance, but there is a snag. To find the eggs you must smash and bash through the houses ant statues of each place you search. You can destroy the buildings in two ways: Hitting them has a quick crumbling effect, but setting fire to them with your bad breath is also a good Idea.

You can pick up objects from the demolished houses to help you grow stronger. Hamburgers Increase your strength, and bolts of lightning increase your fire power. This could all be very easy If It weren't for those pesky people who aren't keen on you re-landscaping their towns.

The inhabitants do their best to stop you by knocking down your energy with large catapults and cannons. To top this, once you've captured an egg, the other monster fights you for it. Win and you keep it, and once five are collected, you're off to the volcano for the big one, a golden egg to complete the game.

It all sounds jolly good fun, but sadly Aaargh! is badly programmed. Playing it is like stepping backwards in time to the early Spectrum days. The main sprites are small and uninteresting, and the people are about four pixels high! Nice in real life, but on the fighting section I just laughed my socks off! (poooo!). The larger sprites for each monster are made by (wait for it) expanding the original small sprites! The multi-load lust makes the situation worse. Avoid.

'How's about this for a dire game? The storyline is fantastic; 'the monsters are on the loose... to cause chaos... to inflict terrible destruction!'. Honestly, it's not exactly original, is it? It wouldn't be so bad if Aaargh! brought some terrific new feature to the games playing world, but it doesn't. At budget price, it might just make the grade with average addictivity. The awful graphics and a nigh-total lack of playability make this a thorough waste of money.'

The awful graphics and a nigh-total lack of playability make this a thorough waste of money.