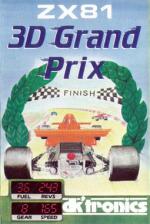 Put your foot down and accelerate away from the pits in this grand prix simulation for armchair-racing fans. Five laps of the track will test the slickest of computer drivers to the full.

3D Grand Prix shows the view through the windscreem as the track is eaten up by your slick machine. Full controls are featured, including accelerator, brakes and six gears.

A lap counter shows you how many times you have been around the track and the number of laps left. Displays also include a rev counter and a fuel gauge.

Weather condictions will affect your lap speed just as in a real race and you receive two reports on the elements every five laps.

Other cars in the race are passing you and you them so you will have to steer carefully to stay in the game.

Keys O and P control your direction, and L enables you to brake. Graphics are reasonably good for the ZX81 - especially as this program has to simulate depth as the track and cars disappear into the distance.

There are numerous other obstacles and eventualities - such as spinning off at a bend or crashing into the car in front of you.

Control of the gears is the key to success in 3D Grand Prix and it will take you some time to learn how to work your way up through them gradually, to derive maximum benefit.

3D Grand Prix is the latest game for the ZX81 from Artic Computing of Hull. It is in the shops now at £4.95 for the 16K machine.

Driving games are rarely attempted on home computers. Unfortunately this, as they can be extremely entertaining. Full marks to Artic for having a go on such a limited machine - and for making such a good job of it as well.

Full marks to Artic for having a go on such a limited machine - and for making such a good job of it as well.