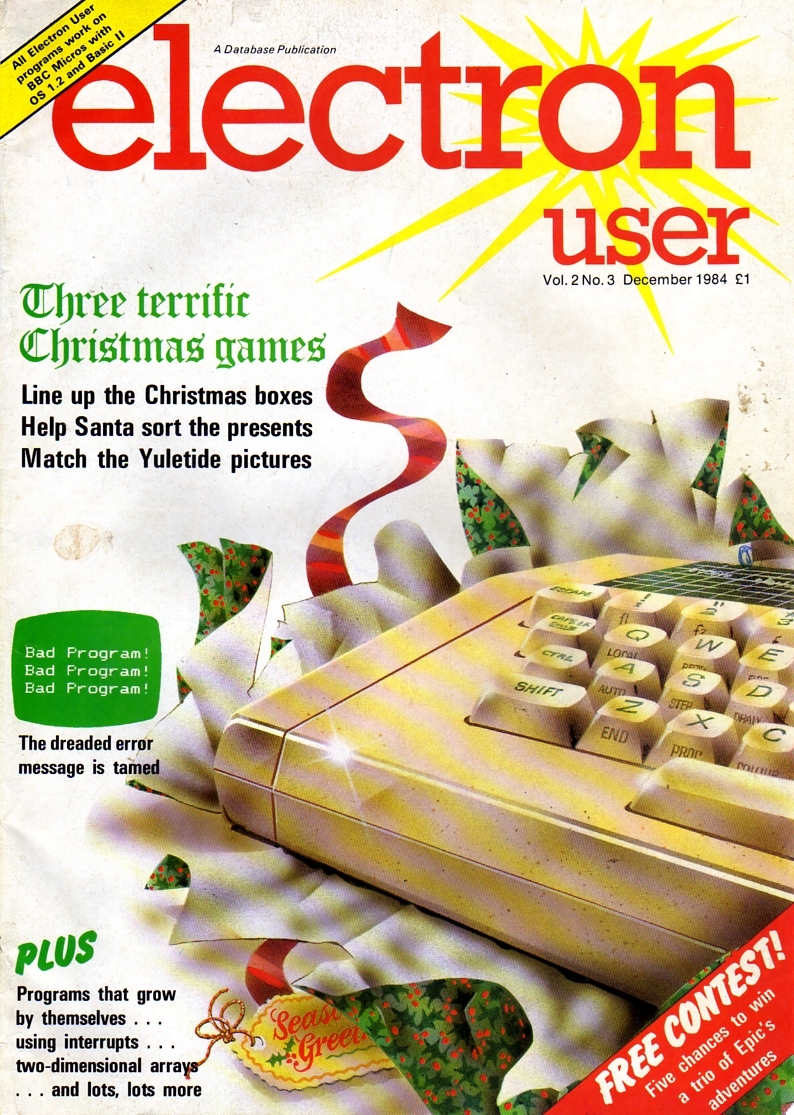 The Editor stopped me. "Waddilove," he slurred. "Christmas is coming. Do something."

After spending a week or so racking my brains trying to think of an original Christmas program I came up with Christmas Carol. It simply wishes everyone a Merry Christmas to the accompaniment of a few festive tunes.

You may be wondering where the originality is in that. Well, it's not what it does, it's how it does it.

The program demonstrates the use of interrupts by playing carols while text is printed in different directions and with various degrees of rotation.

One of the most advanced features of the Electron, and the BBC Micro as well, is the extensive use of interrupts to control many of the background operating system tasks.

An interrupt is a signal sent to the microprocessor telling it to stop what it is doing and switch its attention to something else.

When it has finished this task it returns to whatever it was doing and carries on as if nothing had happened.

These background tasks include updating the clock, used by the pseudo variable TIME, processing ENVELOPEs and maintaining the many input and output buffers and queues.

Interrupts give the impression that the Electron is capable of doing more than one thing at a time by repeatedly switching rapidly between tasks.

Interrupts must not have any effect on the interrupted program. If any of the processor's registers or flags are altered by the interrupt routine, then it will get in a terrible muddle when it returns, probably with disastrous consequences.

Acorn have thoughtfully provided the user with an easy to use, pre-packaged interrupt facility. Every ten milliseconds an interrupt is generated by one of the timers inside the ULA to transfer program control to routines to deal with the background work.

In the process of carrying out this background work a number of events may be generated, such as the interval timer crossing zero. An event handling routine can be written by the user to which control is passed when the appropriate even has been detected by the Operating System.

The Operating System detects all events but ignores them if they have not been enabled with a *FX14 command. If an event has been enabled then program execution indirects via the event vector at &220. (See Page 242 of the User Guide.)

The machine code routine in Xmas Carol is called fifty times a second, coincident with the start of certical synchronisation of the screen display, by setting the event vector to point to the start of the code, and enabling it with *FX 14,4.

When the code is called the registers and flags are saved. As only one event has been enabled there is no need to check that it is the right one.

First it is necessary to see if there is enough space in the sound buffer for the next note, otherwise the program would grind to a halt when it was full.

If there is not enough room, the regsiters are restored and the routine ends.

If there is enough room, then the next note and its length are read from the data stored at page &A and placed in the parameter block at &71. OSWORD is called to insert the note into the sound buffer.

A check is made to see if the pointer is at the last note. If it is, then it is reset to the start again. The registers are restored and the routine ends.

All this happens while the Electron is busy drawing the message on screen, giving the appearance of doing two things at once.

The print routine works by printing the letter at the bottom left hand corner of the screen, and looking at the dot pattern produced.

You can't see it as it is printed in colour 3 which is set to black, the same as the background.

By using some elementary trigonometry the dot pattern can be rotated and drawn at any position on the screen. A point I%, J% when rotated through an angle theta becomes:

An allowance has to be made for the odd shaped pixels in Mode 5 but it is fairly straightforward.

To print text round in a circle you just move to a point on the circumference x%, y% which is radius*SIN(theta), radius*COS(theta). To make the text stand outwards the angle of rotation is -theta.

The machine code is placed at &900 and the data for the carols at &A00, which are buffers used by the cassette system.

It is safe to type in and run programs while the carols are playing, but loading or saving a program may corrupt the code so it is best to disable the routine with *FX13,4.

Don't just use the program as it is. Try experiemtning with different tunes. (Lines 220, 230 and 790 must be set to the number of items in the DATA statement, 254 maximum.)

Alter the messages printed and see what happens if the size of the letters is changed.

Will it run in Mode 1? Try it and see. Alter it if necessary.

A game of strategy by John Woollard

CHRISTMAS BOX is a game of strategy designed to while away a pleasant time after a substantial Christmas dinner.

The rules are simple: Two players take turns to enter a Christmas Box into the grid by pressing a letter key from A to F.

The piles of presents build up to the top, but no further, to the accompaniment of We Wish You A Merry Christmas.

The winner is the first person to get four of their presents in a straight line - vertically, horizontally or diagonally.

If you don't want to type the whole thing by hand then send off for this month's tape. If you want to learn some new techniques to aid your programming then read on.

And if you want to write a program with a structured format so that it can be changed to your requirements then start key tapping.

The program has been written so that another programmer can easily see how it works and therefore be able to change it to suit themselves.

The first nineteen lines do everything. They form the main control module.

The lines call procedures or functions in a sequence that creates the effect seen on the screen. There is a single REPEAT UNTIL loop which continues until one or other of the players has won.

After the end message has been displayed the program automatically starts again.

Modifications
The program was designed to be flexible in its use. The tune can be changed by changing the values in the DATA statements of lines 1760 and 1170. The shape of the Christmas Boxes can be changed entirely by altering lines 1690 to 1720.

The shape of moving sleight is set in line 470.

Obviously, all text can be changed by changing the appropriate PROCPrint calls.

Data
It is most important that these statements are entered accurately as mistakes may not appear as syntax errors but as spurious errors whose source is hard to determine.

A multicoloured Christmas object, such as a tree, appears on the left of the screen and a series of similar objects appears one after the other on the right.

Your job is to tell the Electron when the colours of the objects match exactly. Only you don't say "Snap" - you press the Space bar.

If you're wrong you'll get a short beep. If you're right... well, play the game and find out.

MOUSER was written to help children practise their skills with compass directions.

A mouse is hidden on a 12 x 12 grid labelled with the coordinates A1-L12. Your task is to send your cat to find the mouse - but you only have five goes.

Each time you make a mistake the micro will tell you a compass direction to take.

You must tell the micro the coordinate of the square you wish to search. Incorrect coordinates will not be accepted.

I would recommend you change line 100 to *FX229,1 to disable ESCAPE when you are sure that the program has been fully debugged.

Santa has a bug in his Operating System this year. He has delivered sacks of presents to the six people in Disc Drive, but put them in the wrong houses.

You, the Electron Elf, must sort out the muddle before everyone wakes up on Christmas morning.

You do this by moving from house to house collecting or dropping sacks. You can carry up to three sacks at a time.

If you fail, you are given 20 seconds longer for your next turn. Appropriate tunes are played for success or failure and a record is kept of the fastest time.

The first part of the program uses a series of PROCcircles to produce a picture. The game itself follows and instructions are included within the program.