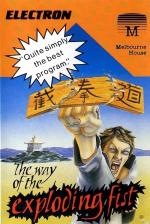 The Way Of The Exploding Fist (1985) (Acorn Electron, Cassette)

The Way Of The Exploding Fist
United Kingdom
BBC/Electron Cassette

The Way Of The Exploding Fist

The Way Of The Exploding Fist is professionally produced and very enjoyable. Read Review

This game has everything. Read Review

Far and away the best graphics I have seen to date. Read Review

The backdrop on the proceedings gives one a feeling that the programmer put as much effort into it as with the detail on the two characters. Read Review

This game is definitely the best of the karate simulations. Read Review

Become a master of this mysterious ancient art: progress from novice to Tenth Dan and test your strength and discipline.

You can control your character with either joystick or keyboard - 18 different manoeuvres including blocks, flying kicks, leg sweeps, round house and even somersaults!

Challenge the computer, facing opponents of progressively greater skill, or complete with a friend.

'I can't tear myself away from this hit game.' - Daily Express 'Quite Simply The Best Program' - Popular Computing Weekly (C64 version)

THE WAY OF THE EXPLODING FIST is a karate simulation game, and is controlled entirely from the keyboard or joystick.

Although it may take a while to become completely familiar with the various moves, you should be able to start playing almost immediately without learning any of the moves. Play without reading all the instructions by pressing 0 to start.

Using the kicks: All kicks are controlled by pressing the fire button and pushing the joystick in the appropriate direction.

Crouching: Pressing the joystick up will allow your character to leap up; while pressing it down makes the player crouch.

Blocks: The joystick also allows you to block your opponent's move. This is obtained by backing off your character while your opponent is performing some aggressive move.

You may occasionally find that when you are naturally backing off, your character goes into a blocking stance. This is fortunate for you, as the "block" is only activated if you are in danger of getting hit by your opponent.

To release the block, move the joystick to the neutral or to any other position other than moving backwards.

"Holding your moves": Most of the moves in THE WAY OF THE EXPLODING FIST can be withdrawn shortly after beginning to execute them so that you are able to change your mind and start another move. This also means that if you do want to continue with a move you must ensure that you hold the joystick in the correct position long enough for the move to be executed.

Practising your moves: The easiest way to practice your moves is to go into 2-player mode and test your skills. Your opponent will not be able to make any moves against you, so you should be able to get all the moves perfected.

This should be enough to get you started playing THE WAY OF THE EXPLODING FIST. The following instructions give you more detail on the subtleties of this exciting game.

THE WAY OF THE EXPLODING FIST can be played in either one-player or two-player mode. Whilst playing in one-player mode, you will always control the blue character.

Various options can be selected before each game:

Playing one-player mode: The object is to move up through Dan levels by defeating successive opponents, each one slightly better than the previous ones. You start at novice level; your task being to reach 10th Dan.

In each bout, the aim is to score a full two points over your opponent. The first player to obtain two full points wins the bout. In the event that neither player obtains two points within the time period specified, the judge will determine which player performed better and award the victory accordingly.

The match finishes when one of your opponents scores two points in any one bout.

Playing two-player mode: In this situation, the match does not terminate as above, but the winner is determined by whoever scores the most after a set of four bouts. After the time limit has been reached in each bout, the judge stops the bout and a new bout is started.

Points are scored not on which action has been taken but on how well each move was executed. If your aggressive move fails to make contact, obviously no points will be awarded. If your move is perfectly executed, you will obtain one full point.

In some instances your move will strike your opponent, but the hit will not be perfect. In these instances, you will only obtain a half-point.

As well as the points for each strike, you will get a score value for each move successfully executed. The score will depend on the move chosen, so that a difficult move, such as a roundhouse kick, will score more than an easy move, such as a jab kick. The score value added will be twice as much if the move was executed perfectly (i.e. a "full-point" execution) than if it was less than perfect (i.e. a "half-point" execution).

As mentioned above, all kicks are controlled by pressing the fire button, and pushing the joystick in the appropriate direction.

The following instructions assume that the character is facing right. You will find that the descriptions refer to "left" and "right". When your character faces the other way, all controls are mirrored - in other words, if you need to press right to get the midkick when facing right, then when you are facing left, your need to press the joystick to the left to obtain the midkick.

The same applies to the punches and somersaults described in the following sections.

Eight kicks are available to you - one each for the eight positions of the joystick.

Flying kick: This is obtained by pressing the fire button and pressing the joystick up. This is an extremely powerful kick, and can be successful against a standing opponent who is not blocking against the move. Other ways to block this kick are to crouch, or if you are fast enough to respond with a counter flying kick.

Short jab kick: This is obtained by pressing the fire button and pressing the joystick in the diagonal lower right direction. The main benefit of this kick is that it is very fast to execute and can be used in closer combat.

Sweep (f'ward): Press fire button and joystick down. This low sweep places your character in a crouching position, the sweeps forward. This can be effective against many aggressive actions, as it combines offence with defence.

Sweep (b'ward): Press fire button and press joystick in a lower left diagonal direction. This move is identical to the forward sweep but the effect is to sweep behind you. This can therefore be used if your opponent is behind you.

High back kick: Press fire button and press joystick in an upper left diagonal position. This move is the reverse of the forward high kick and enables you to attack opponents that may have slipped past you.

You can, of course, also turn around to attack opponents that are behind you (see notes on the roundhouse kick above).

As well as kicks, THE WAY OF THE EXPLODING FIST requires devotees to be adept at close fighting, using punches. Three punches are available from joystick control. Note that the fire button should note be pressed to execute punches.

High punch: This is obtained by pressing the joystick in the upper right diagonal direction. (Do not press the fire button.) This is effective against an opponent that is reasonably close to you.

Jab punch: This is obtained by pressing the joystick in the lower right diagonal direction. (Do not press the fire button.) This is the fastest action you can take, and is extremely effective in very close fighting. At times, your opponent may use this move, and because it is such a fast jab, you may not even be aware of what hit you!

Low punch: This is obtained by going into the crouch position first, then pressing the joystick to the right. Because of the variety of moves that can be accomplished from the crouching position, the low punch can often be a surprise move.

Somersaults are a very fast way to move out of the reach of your opponent. There are two somersaults - one forward and one backward. Note that if you get too close to the edge of the screen in either direction, your somersaults may not be as effective.

Forward somersault: This is obtained by pressing the joystick in the upper left diagonal. (Do not press the fire button.)

Backward somersault: This is obtained by pressing the joystick in the lower left diagonal direction. (Do not press the fire button.)

Blocks: Note that blocks are not the perfect answer to aggressive moves from your opponent. There are two blocks the computer can choose from; a high block and a low block, depending on the action that is being taken by your opponent.

Holding the joystick in block move means that you will be holding the block, and it is actually possible for your opponent to start a different aggressive move that is not countered by your current block.

Note also that the two low sweeps cannot be blocked. If you are within striking range of the sweeps, the only appropriate actions are a jump (joystick up) or one of the somersaults.

Crouch: The crouch is a move that can be "held" by keeping the joystick held down. This allows you to execute either a low punch, or the two sweep actions. If one of the two sweeps is selected from a crouching position, the time taken for this action is greatly reduced, and the move is therefore much more effective.

The following joystick positions will result in the appropriate moves. Each move is explained in more detail further on.

Directions Of Joystick With Fire Button Not Pressed

Using The Keyboard
The keyboard option has been included for players wishing to play this game without the joystick.

The following keys are used in keyboard mode

The operation of these keys is identical to the joystick controls. To switch between joystick and keyboard mode, press the 1 or 2 keys.

The Way Of The Tiger 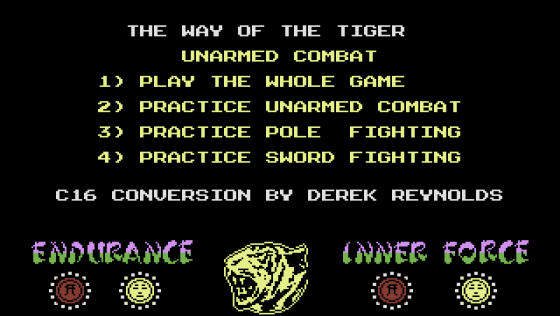 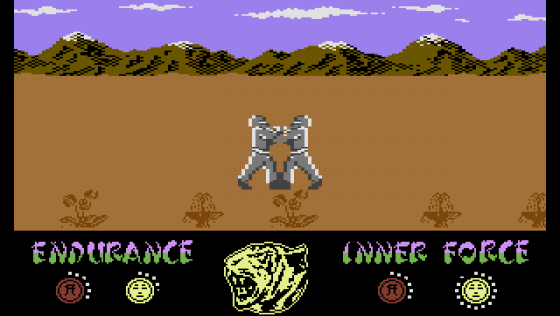 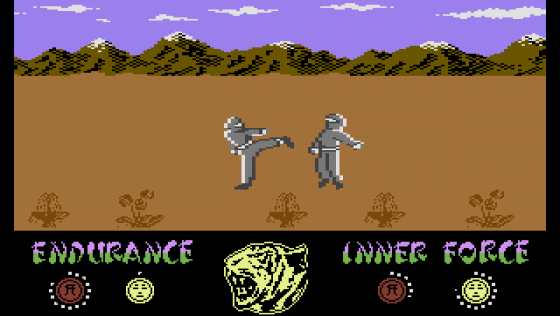