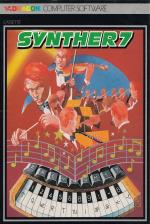 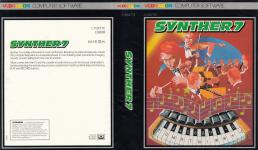 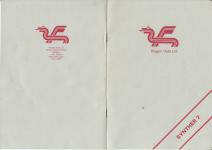 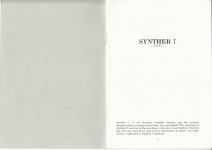 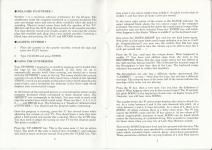 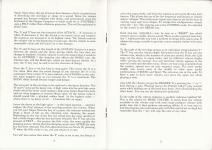 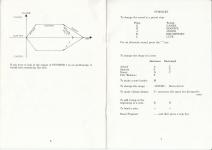 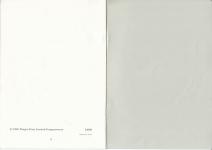 Synther 7 is a real-time software synthesizer for the Dragon. The synthesizer reads the computer keyboard as a musical keyboard. The user can change notes and certain other variables while the music is sounding. Musical sound comes from both the speaker of the TV Monitor, and from the Aux plug that connects to the cassette recorder.

Your Synther 7 program is in machine code. It has been set up to automatically run upon loading. Once running, you should see a screen with the Synther 7 name at the top. The screen should also contain a picture of a set of black and white music keys, a block of text labelled 'STOPS', a set of six bar graphs on the lower centre which identifies the control keys, and a horizontal bar indicator in the lower right which displays your current pitch ranges.

At the bottom of the keyboard picture is a row listing the letters on the computer keyboard which correspond to these musical notes. The QWERTY row corresponds to the black. You may wish to mark with tape the number keys which sound notes. These are the 1, 2, 4, 5, 6, 8, 9, :, - and BREAK keys.

Once the program is running, press U several times while adjusting the volume on your TV. You should hear a note that lasts about half a second and sounds like a ukelele. This is the LUTE stop. You may need to adjust the tuning on your TV for the clearest sound. The pitch is middle C.

In the lower, right corner of the screen is the RANGE indicator. Its upper coloured block shows the two octave range of the computer keyboard. The lower coloured bar shows the tuned musical range of the particular stop you have selected. Press ENTER and watch what happens to the blocks. Where is middle C on the keyboard now?

Now press the Down Arrow key and you are back home again. Now press it a few more times until range indicator is as low as it will go. Congratulations!!! You now own the world's first 256 foot long Lute! (You may need to turn the volume up to be able to hear the four cycle per second note...)

Press K (and turn the volume down). What happened to middle C? You have just shifted stops from the Lute to the Krumphorn. Notice that the stop range colour bar has shifted to the right and has become smaller. This is because the musical range of the Krumphorn is less than that of the Lute. The keyboard range indicator has moved to within this boundary.

The Krumphorn not only has a different timbre (pronounced 'Camber') - or tone - than does the Lute, but also has a different envelope. The coloured bars at the lower left of the screen indicate the envelope of the notes you are playing.

Press B, then a new note. Can you hear the difference it makes? What happens when you do this several times? The B controls the pitch BOING at the beginning of each note. At higher levels of S (Sustain), you will hear more BOING.

The number below the 'B' colour stripe displays the value to which it is set. At a value between 6 and 9, the note descends into pitch. At a value between 1 and 4, it rises into pitch. At a value of 5, there is no BOING. At either extreme there is a little extra twist. The N key lowers the BOING value and the B key raises it. At low values of 'S' almost imperceptible amounts of onset BOING can be found which mimic the flattening of a plucked string. This is useful to remember for those times when you may tire of Loch Ness Monster sounds...