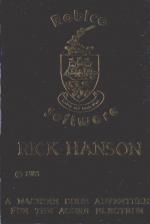 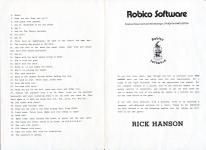 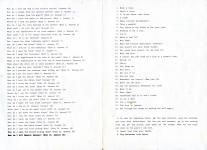 Hmmm... Adventures are problem games, but this one is very frustrating for its lack of clues coupled with its poor command vocabulary and "Can't guess" replies. Read Review

Nothing less than brilliant... Robico must now join Epic as being the software houses for adventures on the Electron. Read Review

Rick Hanson - The First Part of the RICK HANSON TRILOGY.

As Rick Hanson, Special Agent, your mission is to assassinate an evil general and save the world from the final holocaust! This fast moving thriller has many puzzles to solve, characters to encounter and objects to collect as you journey through its vast landscape!

'If you want to know how good an adventure can be, buy Rick Hanson and find out!' - A&B Computing

'Good to see there are still a few programs around that make you envious of BBC owners!" - PC Weekly

Rick Hanson is a machine code, text only adventure for the BBC B with OS 1.2 or the Acorn Electron. The game has many problems to solve, charaacters to meet and objects to collect and examine as you journey through its 220 atmospherically described locations. The program has hundreds of messages which have been compated to approximately half their original length, and when these are expanded there is almost 30K of text!

Rick Hanson has an advanced command line interpreter which allows you to type, in upper and lower case, unpunctuated sentences and multiple statements. The program analyses your command and acts on certain 'key' words.

From time to time the message "I can't guess!" may appear. This means that the computer understood part of what you typed, but needed an extra word or phrase to carry out the command. For example, PAY BARTENDER would not be sufficient. The correct phrase might by PAY BARTENDER WITH COIN.

To enter multiple statements simply leave a SPACE between each set of commands. For example, to go NORTH and then WEST, you could type NORTH (SPACE) WEST on the same line.

Most words may be abbreviated, the abbreviation depending on their position in the vocabulary list. Keep your commands simple as it is usually the case that only two or three key words are required to carry out the desired action.

Here are some examples of command lines to help you during play. The objects' names have been changed so as not to spoil your enjoyment of the adventure.

INVENTORY or LIST will list your possessions.
LOOK gives a description of your surroundings.
QUIT restarts the game from the beginning.
HELP provides a list of common commands. Press a key to see the next word in the list.
SAVE saves a game position to cassette. This gives the prompt 'S:' after which you must type a filename of not more than seven letters. Figures are ignored.
RESTORE restores a previous position. This gives the prompt 'R:' after which you must type a filename as described in SAVE.

As Rick Hanson, special agent, you find yourself in a disused railway station at the start of another secret mission. What the mission is, you do not know, but you are sure it must be important because the Chief has assigned you to the case!

Hints - Make a map. Remember that all the puzzles in this adventure have logical solutions and there is no 'magic'. Read descriptions and messages very carefully. Should you find yourself hopelessly stuck, simply write your query on a separate piece of paper, enclose it with your S.O.S. Help Card and a S.A.E. and post it to us for a prompt reply.

To use this help sheet, read through the list of questions about Rick Hanson until you find one which most fits your requirements. For a nudge in the right direction, look up the appropriate hint number. For the complete solution to a puzzle, turn to the relevant number in the answer section; or preferably, ask someone to use the help sheet for you to reduce the risk of you seeing the answer to a problem you have not yet come across in the game.

If you are still having difficulty with a problem, write to us enclosing a stamped, self-addressed envelope for a reply. Please do not telephone for help because if we are answering queries over the 'phone, we can't work on our new games!

Previous Next
Hampstead (1st February 1986) (BBC/Electron)
A text adventure with a difference, as you attempt to climb the ladder of social standing.