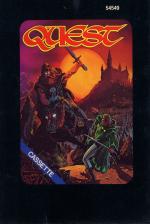 Is this the right version of Quest? Some machines received different versions with the same name.

Quest (Superior/Acornsoft)
Available for Acorn Electron & BBC B/B+/Master 128
A large, graphically intricate adventure in which you must find and use objects successfully to complete your quest. 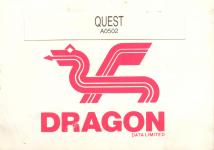 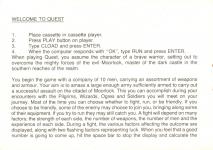 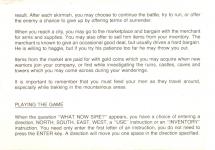 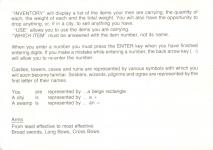 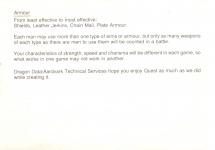 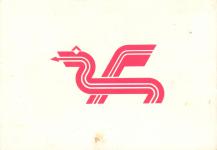 When playing Quest, you assume the character of a brave warrior, setting out to overcome the mighty forces of the evil Moorlock, master of the dark castle in the southern reaches of the realm.

You begin the game with a company of ten men, carrying an assortment of weapons and armour. Your aim is to amass a large enough army sufficiently armed to carry out a successful assault on the citadel of Moorlock. This you can accomplish during your encounters with the Pilgrims, Wizards, Ogres and Soldiers you will meet on your journey. Most of the time you can choose whether to fight, run or be friendly. If you choose to be friendly, some of the enemy may choose to join you, bringing along some of their equipment. If you try to run they may still catch you. A fight will depend on many factors; the strength of each side, the number of weapons, the number of men and the experience of each side. During a fight, the various factors affecting the outcome are displayed, along with two flashing factors representing luck. When you feel that a good number is going to come up, hit the space bar to stop the display and calculate the result. After each skirmish, you may choose to continue the battle, try to run, or offer the enemy a chance to give up by offering terms of surrender.

When you reach a city, you may go to the marketplace and bargain with the merchant for arms and supplies. You may also offer to sell him items from your inventory. The merchant is known to give an occasional good deal, but usually drives a hard bargain. He is willing to haggle, but if you try his patience too far he may throw you out.

Items from the market are paid for with gold coins which you may acquire when new warriors join your company, or find while investigating the ruins, castles, caves and towers which you may come across during your wanderings.

If it important to remember that you must feed your men as they travel around, especially while trekking in the mountainous areas.

When the question "WHAT NOW SIRE?" appears, you have a choice of entering a direction: NORTH, SOUTH, EAST, WEST, a USE instruction or an INVENTORY instruction. You need only enter the first letter of an instruction, you do not need to press the ENTER key. A direction will move you one space in the direction specified. INVENTORY will display a list of the items your men are carrying, the quantity of each, the weight of each and the total weight. You will also have the opportunity to drop anything, or, if in a city, to sell anything you have.

USE allows you to use the items you are carrying.

"WHICH ITEM?" must be answered with the item number, not its name.

When you enter a number, you must press ENTER when you have finished entering digits. If you make a mistake while entering a number, the back arrow key will allow you to re-enter the number.

Castles, towers, caves and ruins are represented by various symbols with which you will soon become familiar. Soldiers, wizards, pilgrims and ogres and represented by the first letter of their names.

You are represented by a beige rectangle.

Each man may use more than one type of arms or armour but only as many weapons of each type as there are men to use them will be counted in a battle.

Your characteristics of strength, speed and charisma, will be different in each game, so what works in one game may not work in another.