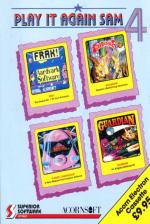 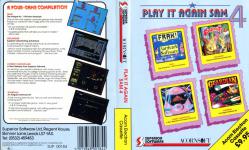 I'd recommend Play It Again Sam 4 to anyone who has has not already bought the games on it. Read Review

FRAK!, The Unique No. 1 Hit from Aardvark
One of the most original computer games ever devised. Propel our caveman Trogg about the weird world of Frak!

"Go out and see it as soon as possible."

"A superb game that will take you hours to master."

"What is more impressive than the detailed graphics, is the sheer number of rooms comprising the two floors, three citadels, catacomb and dungeon."

COSMIC CAMOUFLAGE, A New Release From Superior Software
An exciting, new sequel to Meteors, with many novel, advanced features including gravity levels. Steer your laser-ship through a hall of meteors and flying saucers, smashing them with your laser bolts. When the pace gets desperate, use your Radiation Bombs or go into Warp Drive. As a last resort, install your Camouflage Cover and become invisible to the cosmic debris.

GUARDIAN, An Alligata Software Hit
A fast-moving spectacular. Test your skill and reflexes to breaking point.

"It's a classic defender game...and it's very good"