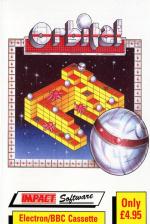 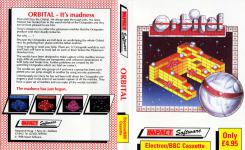 This item contains versions of Orbital for Acorn Electron and BBC B/B+/Master 128.

This isn't "a novel arcade game". It's just a hybrid of Marble Madness and Ziggy. Read Review

The game is strange to say the least, and the default keys difficult to use. The three-dimensional view of the landscape makes selection quite a chore. Read Review

It isn't complicated, but it contains a few interesting problems which should keep you amused for a few hours. Read Review

If you like games which need a little bit of thought, this is one for you... It isn't complicated, but it contains a few interesting problems. Read Review

Poor old Ozzy the Orbital. He always gets the tough jobs. His latest mission has landed him in the weird worlds of the Octopodes and they are far from pleased to see him. Ozzy's mission is to collect the plutonium marbles that the Octopodes produce with their deadly tentacles. But why...? Because the Octopodes are hell-bent on annihilating the whole Orbital race by polluting their planet with the lethal marbles.

Ozzy is going to need your help. There are twelve Octopode worlds to visit and Ozzy will have to work fast on each of them before the Plutonium dissolves him. The worlds have been designed to make capture of the marbles increasingly difficult and there are transporters with unknown destinations to both help and hinder him. Further problems are created by the patrolling Octopodes which are fatal on contact.

The worlds are split into groups of four and once a group has been completed you can jump straight to another by using security passwords. Unfortunately for Ozzy he has not been told about the Octopodes contingency plan in the event of successful capture of all the marbles. They have a spare set of marbles and can make all the worlds invisible! The madness has just begun.

You start the game with three lives. The worlds are in groups of four and after completing a group you are given a security password allowing you to skip a completed group. However, to complete the first part of the mission you must complete all twelve worlds from start to finish without using any passwords.

If you manage this feat then you will start with three lives again (if you lost any) and then will come the real challenge. You must now complete all twelve worlds again, only this time they will all be invisible and you will only see the marbles and the patrolling Octopodes!

The survival of the Orbital race is in your hands.

When you first arrive on an Octopode world you should first of all try to work out a safe route to collect all the marbles. There are several ways to complete any world. However as there is only a limited amount of time it may be necessary to experiment to find a different route that is fast enough.

Ozzy can only fall a short distance without breaking into a thousand pieces. He cannot climb or fly so he should be careful about descending to lower levels.

Octopodes are fatal on contact. They will always follow a set patrol route and you will need to remember their routes in order to avoid them on certain worlds.

Transporters can be used as often as you wish and in fact it will be necessary to use certain transporters more than once.

When you transport it will take a little time to fully materialse at your destination. During this time you will be immune to the Octopodes.

Some marbles may seem to be placed so that if they were collected you would not be able to continue. The solution is The Orbital Snatch.

The exact use of this is for you to discover but requires you to grab a marble from a lower level without actually moving down to that level.

N.B. The password for the first group of worlds is ORBITAL.

A cheat for this game was included on the Electron User 7.10 compilation, released by Database (Refer to the specific instructions on that compilation and match the cheat to the specific version. Note that emulated versions of the game may not work with this cheat).

Previous Next
Bobby Bearing (1st August 1986) (Spectrum 48K)
A very well-animated slopes and pathways game, in which you control a ball bearing, and must traverse a series of taxing screens on a quest to rescue your wayward brothers.

Previous Next
Qbox (9th December 2017) (Spectrum 48K/128K/+2/+3)
Collect up the Qbits in ascending order then roll over the transport pyramid to complete each screen (accessed linearly).