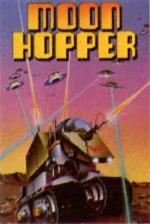 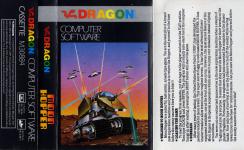 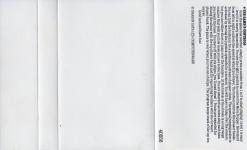 Five levels of play, the most difficult of which will keep your fingers twitching, but won't have you fainting with excitement. Read Review

Moon Hopper is a colourful, fast action, arcade type game. You are the test pilot of a brand new exploration machine and your mission is to return the Hopper, and yourself, to the base before the enemy saucers blow you to bits!!!

After many years of testing, the United States Space Patrol (USSP) has developed the perfect vehicle for moon travel. This super secret buggy is code named "Moon Hopper". It has tractor treads to allow travel on the roughest terrain. It has the most advanced phaser equipment available, one at the front and one at the top. However, the most secret feature of the Moon Hopper is its special suspension, which allows it to jump over obstacles instead of going around them.

You were out on routine test manoeuvres in the new exploration machine when a swarm of Traglons took you by surprise. It seems that they want the Moon Hopper for their travels on the planet Traglonia. Fortunately, the engineers had just connected the computer to the phaser banks. Your only hope of survival is to use the phasers to hold off the enemy while racing toward your home base for reinforcements. Can you save the Moon Hopper and yourself before the enemy saucers blow you to bits?

Once the game has started, simply press a number from 1 to 5 to start playing. Level 1 is easy - Level 5 is nearly impossible.

You use the right joystick to control the Moon Hopper. Movement from left to right controls the speed at which you travel. The button controls the phaser banks. You can hold the button in for a continuous stream of phaser shots. The special jumping action is activated by moving the joystick upwards for a moment.

At the bottom of the screen is a long range scanner that tells you how close you are to the base.

You are awarded an extra ship each time you reach the base. The game is over when you run out of ships.

Points are awarded for hitting the aliens with the top phaser bank and for vapourising boulders with the forward phaser bank. You start off with six ships (You'll need them!). The program keeps track of the top ten scores.

The program will normally auto-start but if the computer hangs up after loading, pressing RESET will start the game.