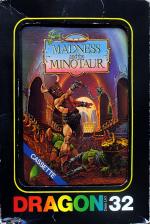 Welcome to the Labyrinth of King Minos | Loading | Clues

Madness And The Minotaur is a classic adventure game utilising two word commands. The first word must be a verb and the second the object of the verb. For example, to pick up a lamp type GET LAMP. To move the adventurer, simply type the first letter of the direction in which you wish him to go. "N" for north, "S" for south, etc.

You must enter the castle of King Minos, descend into the labyrinth, collect all the treasures you can find and bring them out into the forest to score points. You also score points for learning the magic spells of the labyringth. There are creatures roaming the labyrinth, some are friendly, but some are dangerous - so beware!

Madness And The Minotaur is played in real-time, so if you leave the game for any length of time you may well return to find yourself dead. You may disable this feature by typing QUIET. This will ensure that when you return, the state of the game is that in which you left it. To continue playing, type "W".

For the experienced adventurers among you, the above will be sufficient information. For those of you unaccustomed to adventure games, clues for Madness And The Minotaur appear on the following pages.

The top score to be had in Madness And The Minotaur is 240 points - 10 points for each of sixteen treasures which are dropped near the forest (out of the castle and maze) and 10 points for each magic spell learned. You can tell which objects are treasures because you get 5 points for each treasure which you are holding. The location of the treasures is randomized each time you die. There are several rooms which are hazard or benefit rooms. Many of these rooms are also randomized. There are six creatures and an oracle roaming through the castle and maze. Five creatures possess treasures and some of the creatures will attack you. The scorpion's sting will cause a slow death but two cures are available, as well as several things which will slow the effect of the poison.

You begin the game at peak condition. There are many things which may hurt you: stumbling and falling, an unsuccessful jump, the scorpion, minotaur, troglodyte and satyr, just to name a few. There are also many things which will partially restore your strength such as eating, drinking or walking through a magic aura.

There are several objects which are protected by magic spells and may only be released from the spell when you possess certain objects and/or spells.

Listed below are some general clues.

You must determine which spells do which function.