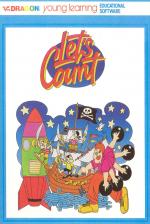 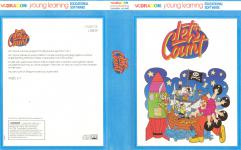 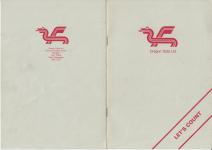 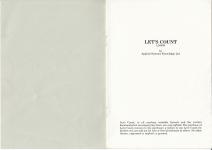 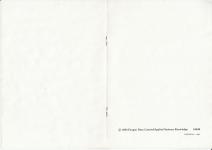 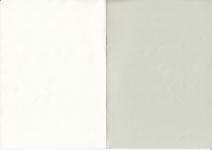 Let's Count is an easy program for early learners aged from 3 to 7.

To start with, parent and child and older sister or brother) work together until the youngster knows how to use the program. From then on, they can count on the computer on their own.

You can count on Dragon to teach you a great deal.

Remember: once you have typed in your response a program will deal with it until you press the ENTER key.

You can always return to the beginning of a program by pressing the BREAK key.

You can rub out anything typed in, before ENTER is pressed, by using the DELETE key.

Means : Please press the space bar to carry on with the program.

Means : the program did not expect the response it has just received. Perhaps there was a typing error? In any case, to carry on, just press the space bar and try again.

All of our programs incorporate sound. There are various volume levels - holding down the CTRL key and pressing S will change the level - keep pressing the keys until you are happy with the volume.

Let's Count is a program which introduces young children to simple counting and the numbers up to nine. An adult or older child is needed to help get the program loaded, to select an appropriate episode for the young learner to work on, and to explain what to do. Thereafter, parent and child can work together, or if the child is confident enough, he or she can be left to get on with it, as long as help is close at hand.

Only two of the keys on the Electron computer are used by the child. They are the space bar, the largest key of all, and the ENTER key. The child isn't expected to be able to read the word ENTER which is printed on the key, but, with the help of an adult or other child, will soon remember where it is. As the rest of the keys on the keyboard are ignored, it can do no harm if another key is pressed by accident. How To Use

Remember that there should be an adult or older child present to help the child select the game to be played. The first menu displayed after loading asks which range of numbers is required, 1-3, 0-4, 5-9 or 0-9. 1-3 is the easiest level as there is only a choice of 1, 2 or 3 objects to match, 0-4 introduces the idea of no objects, and 5-9 introduces larger numbers. At the top end of the scale the numbers 0-9 are all brought into the same game. Select the range using a, b, c or d and press the ENTER key.

Whenever the hand icon appears during these four games, just press the space bar when you are ready to continue.

The sea, and then a number of islands (3 for range 1-3, 5 for the other ranges) are displayed. A number of treasure chests then appear on each island, and a ship will appear in the top right hand corner of the screen. The ship has a number of shields on its side, and the child should direct the ship to the island with the corresponding number of treasure chests. This is done by pressing the space bar - each press moves the ship to another island. When the child is satisfied that the number of shields on the ship matches the number iof chests on the island, the ENTER key should be pressed. If the child is right, there is a suitable reward. When ready, press the space bar for a new ship. If a mismatch has been made then the play continues with the same ship for one more go; another mismatch causes a new ship to appear.

Here, the number shapes - numerals - are introduced. They appear on space stations in the sky. On the moon below, a rocket with dark windows appears. The child has to send the rocket to the space station with the numeral corresponding to the number of windows on the rocket. The play is the same as that for Treasure Island; use the space bar to move the rocket and the ENTER key to launch it, ie there were three windows on the rocket the child should point it at the space station with three on it and press the ENTER key. A match results in a suitable reward, a mismatch leaves the same rocket for one more go; another mismatch causes a new rocket to appear.

This game starts by drawing the Roll-a-Ball scene. The aim is to sort the numbers displayed on the plates into ascending order as follows. Select the plate with the lowest number, line the ball up with it using the space bar, and roll the ball by pressing ENTER. If it is the lowest, its number is then transferred to the bell score. The game proceeds like this, until all of the plates have been knocked down correctly. If, at any point, a wrong selection is made the bell score returns to zero and all the plates reappear in the same order as before, ready to be sorted again.

Before the game starts, another menu is displayed. The choice is for two or three way decision-making. Two way gives the player two unequal sets of objects to compare. The three way choice additionally gives the option of having an equal number of objects. Press 2 or 3 and then the ENTER key. The screen now shows a hopper with two or three chutes depending on the decision just made. Each chute is labelled, and the child has to count the numbers of red and blue objects in the hopper. The space bar should be pressed to make the pointer aim down each of the chutes in turn. When the player has decided which way the objects should go, the ENTER key should be pressed. If the decision is correct the objects fall down the chute; if the player makes an incorrect choice then the scene remains the same and the decision has to be made again. After two incorrect decisions the objects will get reordered into lines at the top to help the child decide.

This program introduces the fundamental ideas of matching, one-to-one correspondence, cardinality and ordering. It should be used as a learning instrument alongside as much practical counting activity as possible. The infact will probably recognise the number symbols (numerals), written and spoken, from television, street signs and so forth, but it helps to implant the meaning of these conventional signs if the infant plays games of counting with toys or household items or with the special apparatus that is available to reception classes and playschools.

When introducing counting it is important to stress that 2 is one more than 1, 3 is one more than 2, and, later, that 1 is one more than 0. In short, one must emphasise the 'nextness' property inherent in the counting numbers. This is what makes numbers harder for infants to handle than might be supposed from their simply learning to count aloud. Nevertheless, infants can gain fluency in saying the number words (whether they understand their meaning or not) from traditional counting rhymes, such as "One, two, buckle my shoe," and so on.

It is also advisable to make evident to the infact that the last number in the sequence 'one, two, three' (for example) gives the 'number' of the set being counted. Once upon a time shepherds, when asked how many sheep they had in their flock, did not answer with a simple number, the total, but counted all the way up from 1 up to the total! Naming the last number in the count, thus avoiding the tiresome process of counting all the way, was an invention of great economy and power. We should not expect the infact to make the same mental leap unaided.

The game will load and run automatically.