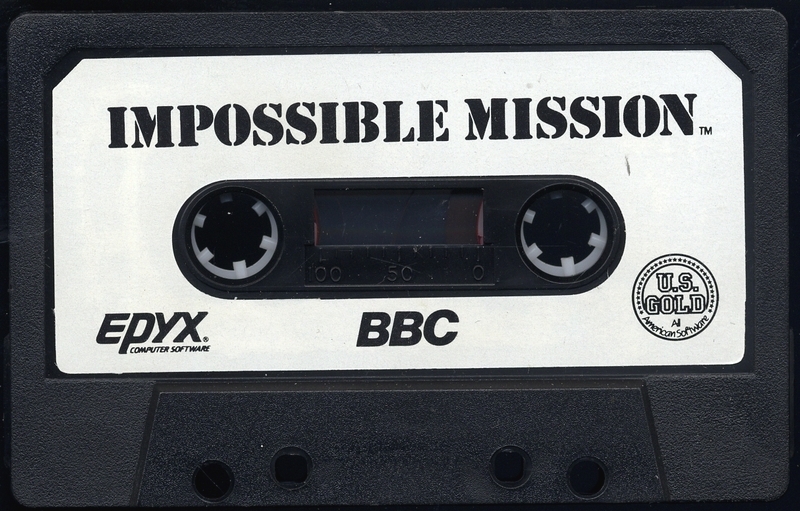 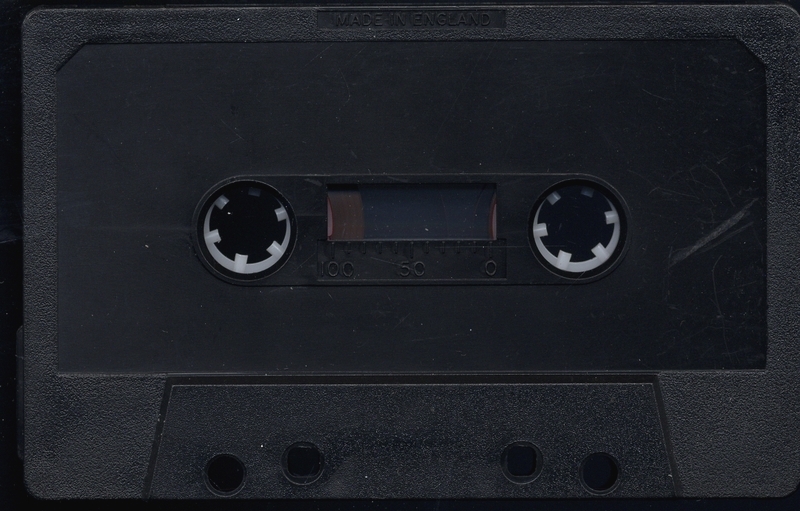 Enter a mad scientist's lair, run and jump the robots, search the computers and assemble the magnetic punchcard to escape.

Your mission, Agent 4125, is to foil a horrible plot. From an underground laboratory, Elvin, the scientist, is holding the world hostage under the threat of nuclear annihilation. You must penetrate his stronghold, avoid his human-seeking robots and find the pieces of the security code. Somersault over the robots or use a precious snooze to deactivate them long enough to search each room. Use the Agency's computer to unscramble the passwords from the code pieces, or try to solve them yourself. You've got to reach Elvin's control centre, but you'd better beware...

This mission is stamped IMPOSSIBLE.

2. Situation: During the past three days, key military computer installations of every major world power have reported security failures. In each case, someone gained access to a primary missile attack computer.

Only one person is capable of computer tampering on this scale: Professor Elvin Atombender (hereinafter referred to as "Elvin").

We believe that Elvin is working to break the computers' launch codes. When he succeeds, he plans to trigger a missile attack that will destroy the world.

3. Mission: You must penetrate Elvin's underground stronghold and stop him. To succeed you will have to evade the scientist's robot guards, break his security code and find his control centre. Your predecessors, Agents 4116 and 4124 (may they rest in peace), were able to send back some information about Elvin's installation. It is detailed in the following pages.

Your only weapons will be your keen analytical mind and your MIA9366B pocket computer. Good luck. The world is depending on you.

Elvin was a nice boy - his mother loved him. In school, he loathed sports but excelled in mathematics. He seldom caused any problems (at least, none with any global consequences). At home, Elvin spent most of his time gaping into his computer screen, and this did not prove to be harmful to anyone either.

Oh, there was the time Elvin broke into the phone company's computer system and changed the records. Angry at his parents for some real or imagined crime, the playful youngster added a long distance call to their monthly bill. A five-and-a-half hour call to Afghanistan. His parents were tolerant. They were sure he would eventually grow out of his passion for tinkering with other people's computers.

"Let him have his fun," his mother would say. To which his father would reply, "Kids will be kids." There was, of course, no way for them to know what the future would bring.

It was during his days as a college student that Elvin was transformed from a promising young man into a snivelling evil-doer. He had become obsessed with a new computer game, "Giggling Penguin Invaders From Outer Space In The Vicinity Of Ursa Minor." (Elvin had always hated penguins from Ursa Minor.)

The game's score counter went up to 100-billion, and Elvin was determined to "max it out". After playing the game for several days without sleep, he had vaporized enough penguins to pile up 99,999,999,85 points. One more tuxedoed avian and he'd have it.

Elvin shook out his joystick hand. A 250-point penguin waddled onto the screen. Elvin's eyes lit up. He took aim. And then, at that precise moment, the power failed. Elvin's game was lost; he'd never get a score that high again. In that instant, something snapped in Elvin's mind. He was consumed by a single maniacal obsession. He would repay the world for the injustice it had dealt him.

For many years, Elvin waited. He became a distinguished professor, a renowned expert in computers and robotics. Then, eight years ago, he disappeared. His whereabouts were unknown until now.

Using a fortune he amassed by raiding the computer systems of various financial institutions, Elvin constructed a vast, underground stronghold packed with computer equipment. There, in seclusion, Elvin spent four years working to breach the security of military computer installations around the world. As you know, he has succeeded.

Our computers estimate that he will break the launch codes and trigger the missile attack in exactly six hours. This is the amount of time you will have to complete your mission.

Elvin's stronghold has 32 rooms. Some of them are used as living quarters and others are computer rooms. But (here comes the strange part) our intelligence indicates that each room has a series of a floors, or catwalks, which are connected by lifts. The last agent who tried to crack Elvin's stronghold gave the following report:

Clearly, Elvin has constructed the rooms of his stronghold in such a way that only he can negotiate them easily. The floors and catwalks often end quite abruptly, dropping off into space. And, of course, they are guarded by Elvin's nasty, human-seeking robots. Devilishly clever, that Elvin.

Our intelligence indicates that Elvin uses three types of codes (or passwords) in his security system. One code deactivates the robots, another operates the lifts and the third code (a password) unlocks the control room.

We believe that Elvin hides the passwords in his furniture.

Elvin, who is extremely absent minded, frequently forgets the passwords for his security computer. His solution is to scatter them haphazardly around the house. You can find one of his passwords in the sofa. Or the stereo. Or the candy machine. But you must find them. Without the passwords, you will almost certainly end up like Agent 4124 (but we don't want to think about that, do we?)

Once you find the codes, using them should be relatively easy (for the most part). You should be able to log onto a security terminal as you enter each room and deactivate the robots or reset the lifts (if necessary) from there. This should present no problems. However, the control room password is another matter. Realising the importance of this code, Elvin has broken it into dozens of pieces, scattering them throughout the complex. You will have to find and retrieve all of the pieces and match them up like a puzzle to form the password.

With the completed password, you can gain access to the control room, where Elvin is preparing to launch the missiles. You have to stop him. Or the world is going to be terminally late for dinner tonight.

To succeed at Impossible Mission you must penetrate the rooms and tunnels of Elvin's underground stronghold, avoid his robot defenders and put together his secret password. Then you can enter Elvin's control room and put a stop to his plans.

You score points by finding puzzle pieces and putting them together, and by reaching Elvin's control room before time runs out. As your skill at the game increases, you can achieve higher scores by completing the password and reaching the control room with more time left on the clock. But each time you play, the rooms and robots will be rearranged, and the puzzles will be different.

As you explore Elvin's stronghold, your pocket computer (at the bottom of the elevator screen) will display a map of the rooms and tunnels you have entered. In every room, you should conduct a search.

Search every object or piece of furniture in the rooms for codes and password puzzle pieces (if you can avoid the robots). You can do this by standing directly in front of an object (sofa, desk, fireplace or what- ever) and pressing the * or ? keys.

The word "Searching" will appear in a box near your agent's shoulder. You will also see a horizontal bar indicating the length of time it will take to search the object. You must continue searching until the bar disappears. If your search is interrupted for any reason, you can go back to the object and resume searching where you left off. But if you search another object you'll have to start the search from the beginning.

When you have finished searching the object, one of four things will appear above your agent's shoulder.

You can use the SNOOZES and LIFT INITS at any security terminal. These terminals are usually located near the entrance to each room. They look like television sets with darkened screens facing toward you. 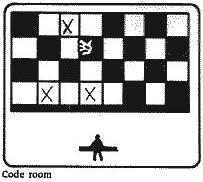 Elvin's stronghold contains two code rooms where you can earn additional passwords. Walk up to the console and search it. A sequence of squares will flash on the wall, each with a musical note, and a glove will appear. Use the glove to touch each square in a sequence so that the notes are sorted in ascending order (from low to high).

If you produce the proper sequence of notes the checkerboard will flash and you'll get a SNOOZE or a LIFT INIT password. You can do this as many times as you like, but the sequence gets longer each time. You can quit at any time by touching the blue bar.

Your pocket computer is an amazing device. It allows you to play with the puzzle pieces right on the screen, twisting them around to figure out how they go together. 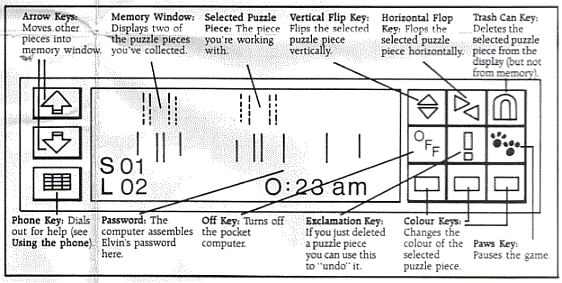 When the computer is activated, the map of Elvin's stronghold will vanish and a glove will appear. Use the glove to put the puzzle pieces together, forming the password that will let you enter Elvin's control room.

The door to Elvin's control room is in one of the blue rooms. When you have completed the password, position your agent directly in front of the door and try to search it. The door will open, and the world will be able to breathe again.

When you touch the phone key on your pocket computer, it dials up the Agency's main computer (to get some help with the puzzles). But there is a charge for using it. Each use of the phone costs two minutes on the game clock.

The Agency's computer will give you three choices. Select the one you want with the glove, then press the fire button.

Orientation. The computer will flip the two puzzle pieces in the memory window to orient them correctly (right side up and forwards, instead of upside down and backwards).

Enough? The computer will look at the upper puzzle piece in the memory window and tell you whether you've found all three of the pieces that go with it to make a puzzle.

You can end the game at any time by pressing the ESCAPE key. The rooms and robots will be rearranged, and the computer will generate a new set of puzzles.

The game clock (on the pocket computer display) starts at 0:00. The game ends when the clock reaches 6:00.

When the game ends, you are awarded points as follows:

Here are some playing hints from the author of Impossible Mission:

Well, that's all you'll get out of me. The rest is up to you. After all, saving the world isn't supposed to be easy.