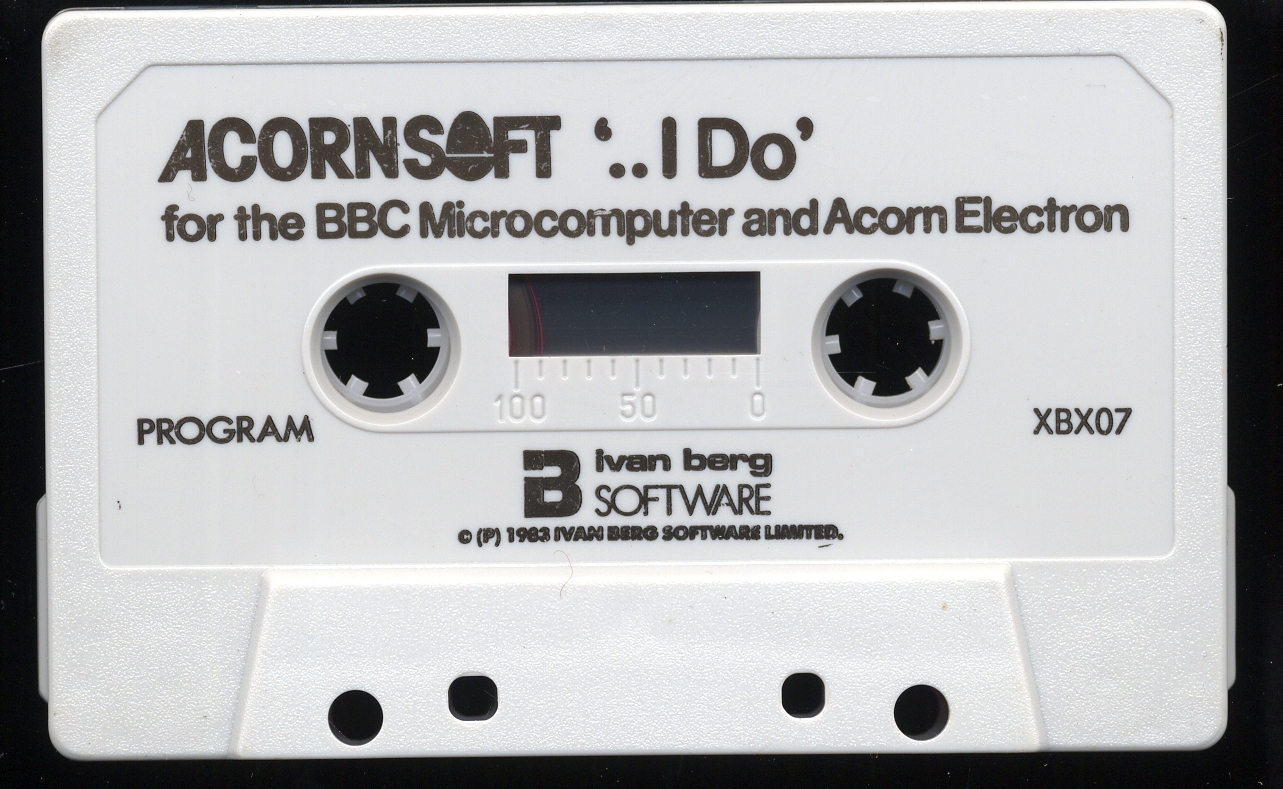 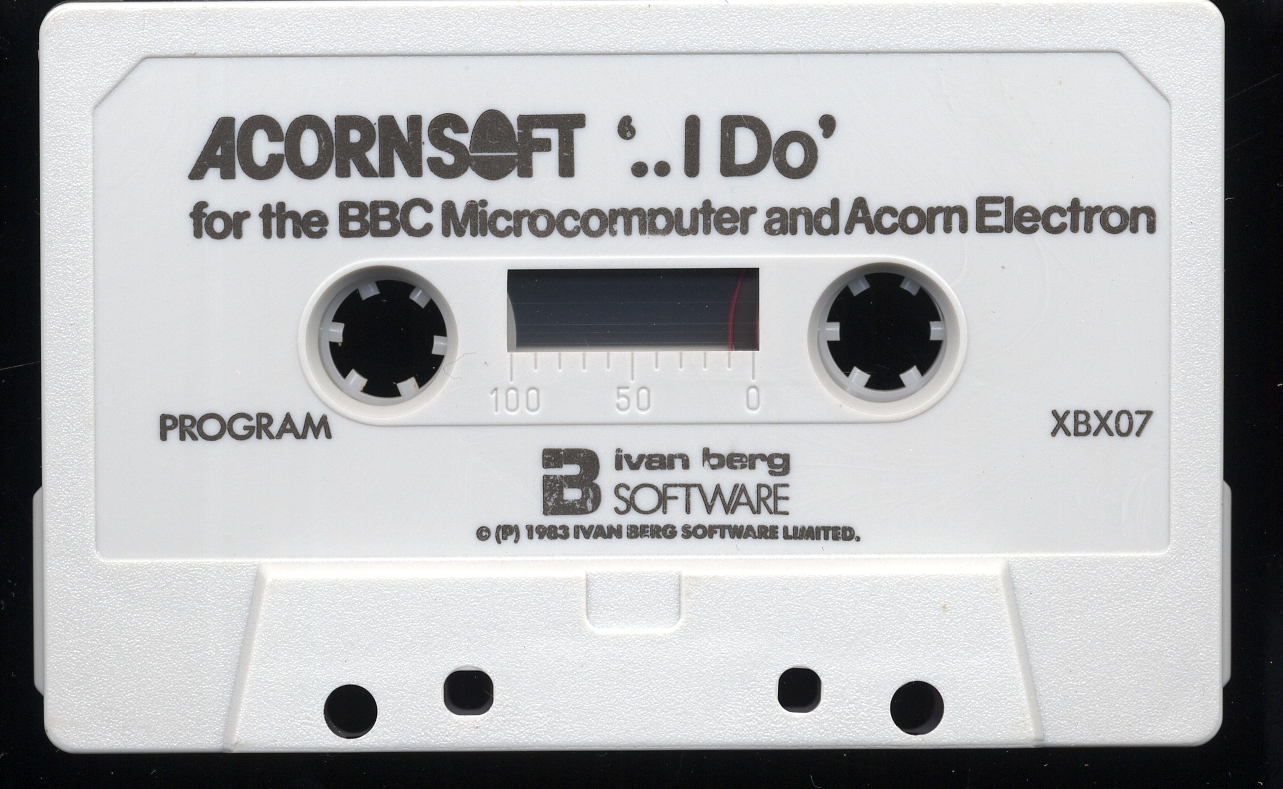 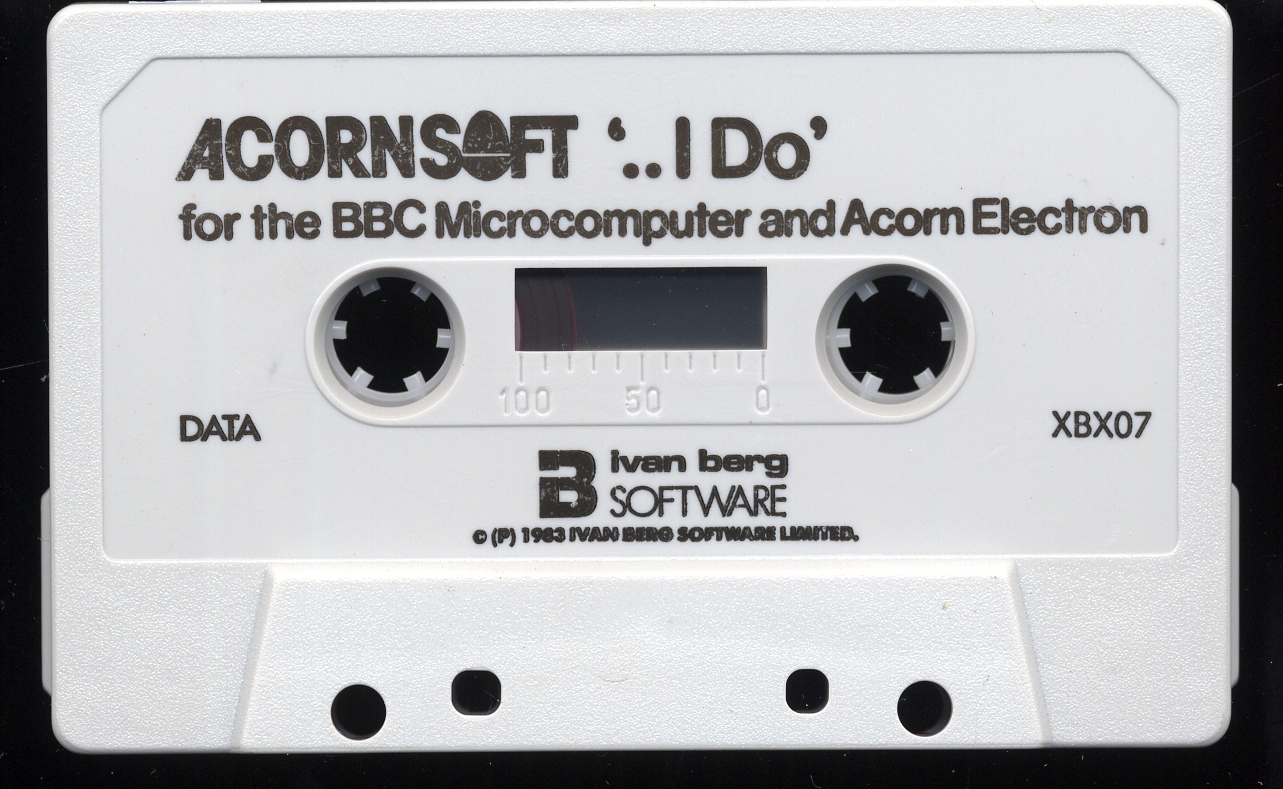 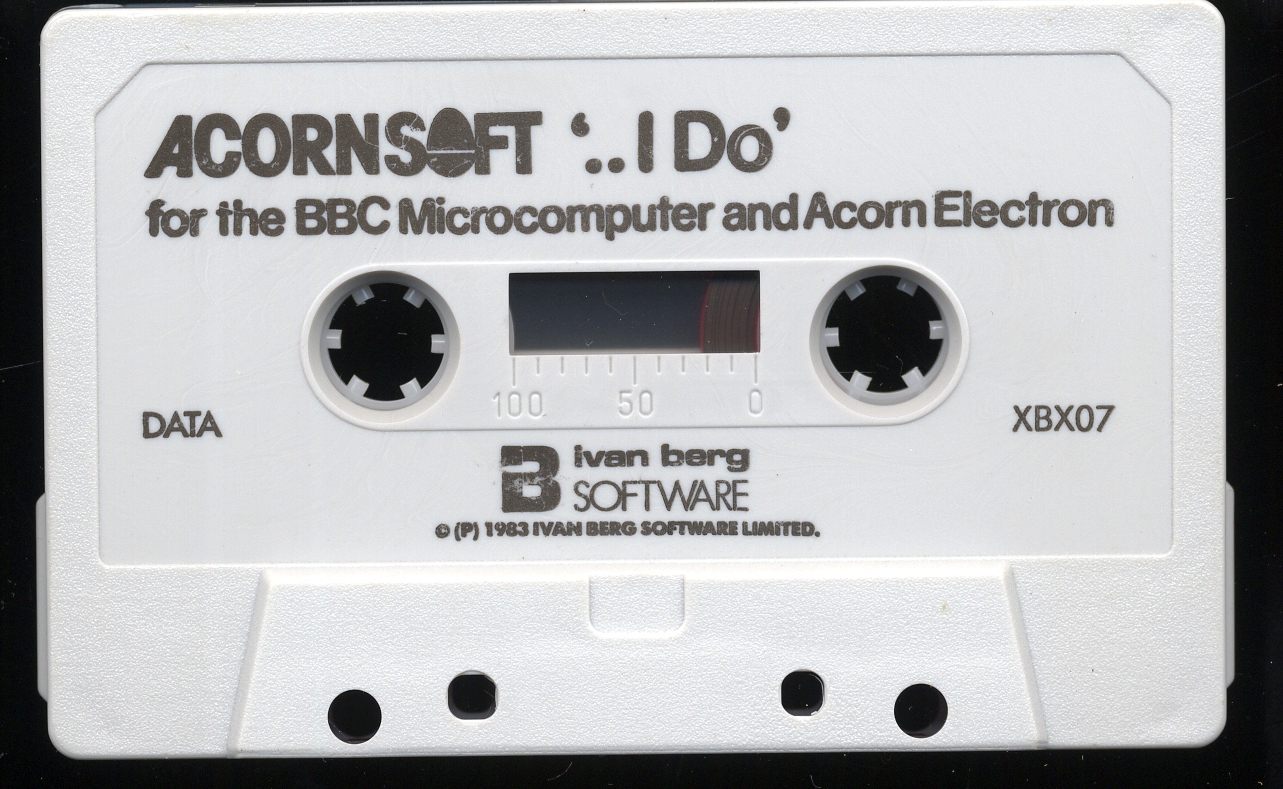 An intriguing utility that claims to assess the strength (or otherwise) of your current marriage or partnership, based on the guide of the same name.

This program is based upon a series of fascinating questionnaires used by Hans Eysenck in his book '...I Do' Your Guide to a Happy Marriage published by Century Books in 1983.

The program can provide couples (married or unmarried) with a great deal of useful information about themselves and their relationship.

Used honestly "I Do The Program" can help you understand just what psychologists mean by the terms introversion versus extraversion, emotional stability versus instability, high libido versus low libido; and give you a fairly clear idea of how you compare with your partner in these areas of personality and indicate what this could mean for your relationship.

I Do The Program" will provide information on the following:

Warning : The Author and Publishers accept no responsibility whatsoever for the success or failure of any existing or future relationship examined by this program.

This pack contains one program cassette, one question data cassette and an instruction booklet."

Marriage, despite rumours of its imminent demise, remains one of our most popular institutions. Moreover, marriage is good for us. According to all the most recent studies, married people are happier, healthier and have more self-esteem than their single counterparts. They tend to live longer and, in general, have a more positive outlook on life.

If marriage is so good for us, how does it happen that so many marriages are filled with unhappiness? Why do one in three couples get divorced? And how can we reconcile this high rate of divorce with the idea of marriage as a popular institution?

The answers to these questions are far from simple, but I feel that much of the problem springs from inappropriate selection of marriage partners. My research shows that, of all the factors that make for success or failure in marriage, it is the question of personality that is crucial. And the assessment of personality is an area of which most people are, understandably, comparatively ignorant. Many marriages, then, are doomed - or at least destined for severe growing pains from the start.

What, then, will you gain from answering the questions in this program about happiness in marriage? Certainly there are no quick and easy solutions to the subtle stresses that exist between married couples. But by completing each section honestly, you should be able to get a rough idea of where you stand on the issues of personality, attitudes and happiness. It is in this spirit of 'know thyself' that this program is intended. It can help you understand just what psychologists mean by the terms introversion versus extraversion, emotional stability versus instability, and high libido versus low libido; give you a fairly clear idea of how you compare with your partner when it comes to these qualities; and provide some indication of what this means for your marriage.

Of course, neither the social nor the physical scientists have the answers to all of our questions. The psychologist studying marriage is trying to understand how two very complex entities, a man and a woman, interact, and how much of this interaction is determined by their personality, intelligence, environment, age and experience. Although certain things can be done to make one's life happier, there are no magic formulae, and it would be irresponsible to suggest that there were. The science of human relationships is imperfect at best, but we can gain from it some general guidelines, together with certain assumptions which do tend to hold up over time.

This program has been written from the point of view of empirical science. By 'empirical' I simply mean based on the facts as observed. I do not intend to pass any moral, religious or ethical judgments on the findings of the program. Certainly you are free to view the results from your own religious or ethical perspective; I am presenting my findings as a psychologist and social scientist, not as a philosopher.

Use your results as you will, and, although I make no promises, I sincerely hope that the gain in self knowledge will improve your chances for marital happiness and fulfillment. However, the study of human behaviour, especially as we watch its interaction in marriage, is certainly an imperfect science. Science itself does not know all the answers. So take what you can from what I have to offer, and prosper.

This is the program's Main Menu:

Each option is explained in detail below. To choose an option from any menu, type the required number and press RETURN.

If you wish to answer the questionnaire, type 1 and press

Remove the program cassette from the cassette deck and replace it with the data cassette. Type Y if you have motor control, N if you do not, and press RETURN.

The following will be displayed:

Answer the questions as they appear on the screen. Remember to press RETURN after each entry.

Press SPACE as requested. This is the Questionnaire menu:

If you decide to answer questionnaire 1, the following will be displayed:

This is the first question on the Extraversion/Introversion scale.

The name of the person who is to answer the question appears on screen. Read each question carefully and evaluate it. When you have decided which answer best accords with your personal opinion or behaviour, type in the number next to that answer. Answers are completely confidential and do not appear on screen. The next question will be displayed automatically.

When a questionnaire has been completed, this screen will be presented:

Press SPACE and you will see the scores, indicated on a bar chart.

On pressing SPACE you will be returned to the Questionnaire Menu from which you may select the option of running another questionnaire or of returning to the Main Menu. If you EXIT from this menu by typing 9, please remember to save your results so far.

(Note: If you have a BBC Micro, you have the option to print out your results when you select 9 (EXIT) from the Questionnaire Menu. Follow the instructions given on screen.)

This option allows you to save the resuts of one or more questionnaires either for future reference or (if you have not yet answered all the questionnaires) for you to add to at a later date. You must save each set of results - that is, for either one or two people - on a different tape, or the new information will erase the old.

If you do not save the information before ENDing the program, you will lose all results so far.

If you select option 2 the following is shown:

Follow the instructons on screen and your previously-saved results will be loaded and displayed for you to add to.

WARNING - Using this option will erase all scores already held in the computer.

There is no ideal score representing the ideal combination of personality traits. No direction your personality takes indicates either superiority or inferiority. An extraverted personality might make you more popular at parties, but being an introvert is likely to get you better exam results. The same holds true for emotional stability versus instability. An excess of instability may be a bad thing, leading to neurosis and unhappiness, but a lesser degree of the same may be related to artistic ability and expressiveness. Likewise, a very stable person may have such a lack of emotion that he or she is unable to appreciate music and other artistic sources of satisfaction. It is all a matter of degree. Woman tend to score higher than men on instability.

A typical behaviour pattern for a person achieving high scores in psychoticism would make him or her emotionally cold, egotistical, aggressive, antisocial, lacking in feeling for interpersonal relations and generally hostile. At the opposite end of the psychoticism scale is the 'superego' - the altruistic, emotionally responsive, friendly, helpful and warm personality.

This matter of psychoticism, a dimension independent of extraversion/introversion and stability/instability, has a high degree of difference between men and women, males typically having a higher score than females. Those who score highly on psychoticism tend to be unhappy in marriage no matter who they marry. Studies have shown, however, that there is a higher chance for happiness if it is the man who has the higher score for psychoticism than the woman. Note particularly that even quite high scores on emotional instability may indicate an artistic temperament, a high score on psychoticism originally and creativity. If your answers lead you to the melancholy conclusion that you are not perfect, be reassured: none of us is!

Studies show that political beliefs and social attitudes do affect the chances of success in marriage. Two aspects are measured in this question naire: a political dimension, radicalism versus conservatism, and an atttude dimension, which measures what we call toughmindedness versus tender mindedness.

People do seem to marry others with similar attitudes on these issues, and perhaps this is another variation on the general observation that like prefers like on issues of socioeconomics, education, residence, living habits, and so on.

The degree of similarity on the radicalism/conservatism scale does not seem to matter as far as marital satisfaction goes. But couples in which the man was more toughminded seemed to have happier marriages; tendermindedness in the woman seemed to matter too.

If some radicalism in general indicates a tendency towards marital dissatisfaction, it would only stand to reason that feminism, a branch of radicalism, would add to the troubles within marriage. The very nature of feminism, with its tendency towards confrontation as opposed to accommodation, starts the spark, and this means marital difficulties. Let it also be said at this point that the emotional manipulation found in traditional domestic women leads towards marital dissatisfaction as well. Again, extremes seem to cause the problem.

Remember that these scales are based on our idea of what characteristics are 'masculine' and what are 'feminine'. It should be made clear that everyone - both men and women - possesses characteristics from both the male and female scale.

The happiest couples seem to those where both parties have high masculinity scores and high femininity scores. The next happiest group contains those couples where the man is very masculine (or high on both scales) and the woman high on the feminine scale. The least happy couples were those where neither partner had a score on either scale.

The third scale is the masculinity scale. This scale weighs those traits which most clearly differentiate between men and women. It is fairly similar to the libido scale, and, just as men score higher on libido, so they will score higher on masculinity than will women. I include this scale simply as a point of interest to the reader who may be curious to see how his or her scores on it compare with others. High or low scores are simply characteristic of a given person. There is absolutely no reason why a man or woman should score near the mean. Any score can be compatible with contentment and marital happiness.