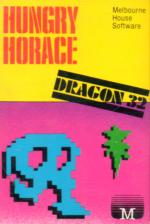 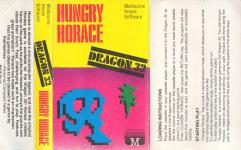 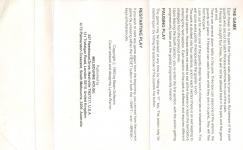 Horace is almost a microcomputer legend, and now the original Horace game is available for the Dragon 32! Horace creates havoc in the park as he picks the flowers, annoys the guards and steals their lunch.

"Horace has made such an impression that his games deserve to be classed in a genre by themselves." - Personal Computer News

Each flower in the park that Horace eats adds to your score. But beware of the park guards who are out to catch Horace and throw him out of the park. If Horace is caught four times, he will not be allowed back in the park and the game will end.

There are several alarm bells in the park. If Horace can steal one of the alarms, the guards will panic. If Horace can catch them while they are in a panic, they will flee from the park.

Look out for when one of the guards drops his lunch of cherries or strawberries. You will score extra points if Horace eats the guards' lunch.

Hungry Horace has a built-in demonstration mode, which allows you to see what the various stages of the game look like.

To see the demonstration mode, simply let the game run.

To start play, press any key or the joystick fire button.

Hungry Horace is a machine code game for the Dragon 32. You are Hungry Horace, intent on devouring everything in your path. Horace will move along the paths, bridges and tunnels of the park by using the joystick or the arrow keys.

Use the arrow keys or joystick to control Horace.
P/SPACE - Pause/Restart