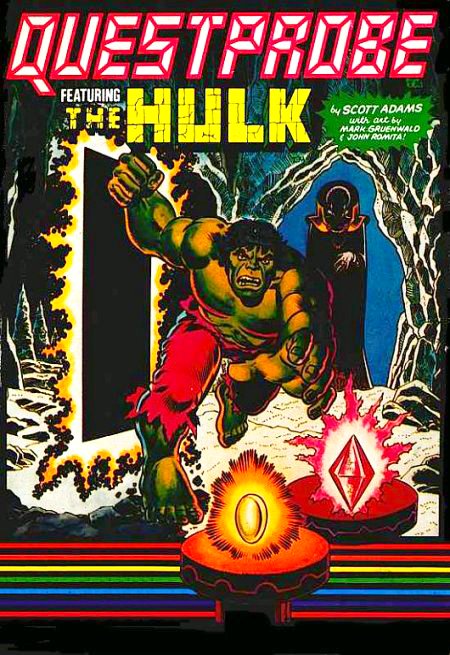 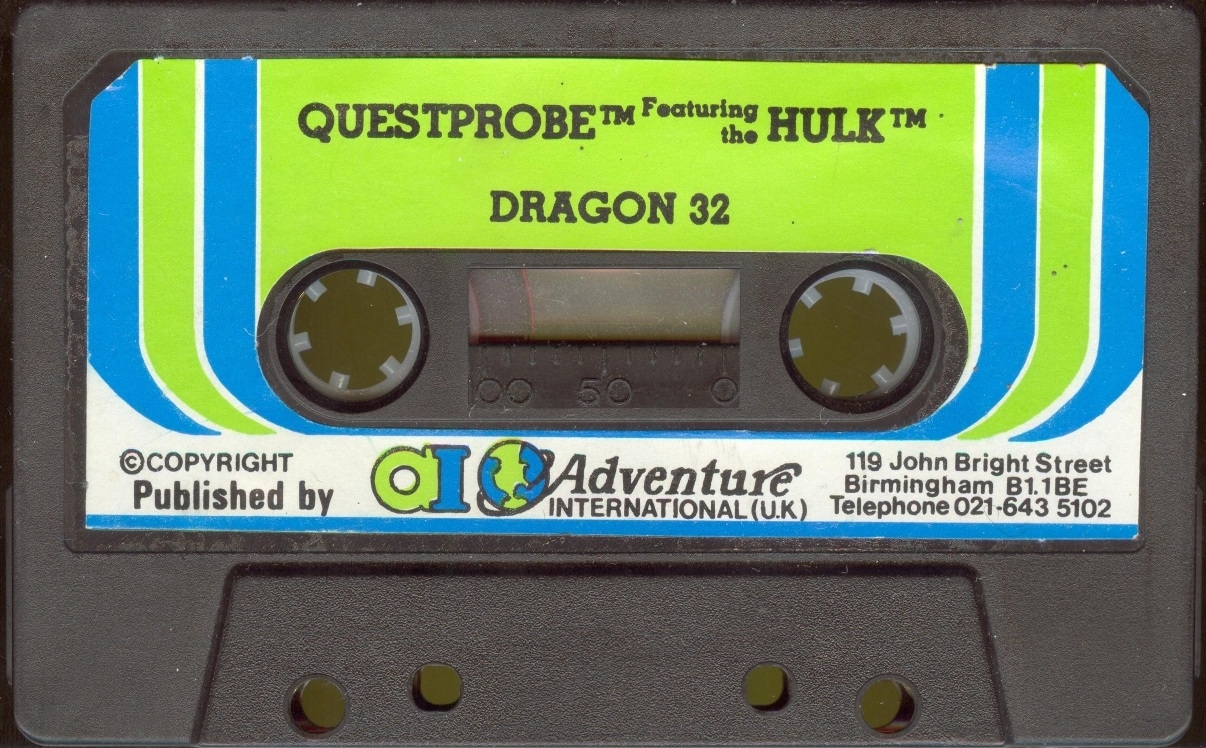 Listen up, True Believer! The world's premier comics company has joined with the originator of Adventure games to bring you the awesome QUESTPROBE Series : an epic group of home-computer adventures by Marvel Comics and Scott Adams in which you become one of the greatest Marvel Superheroes characters.

Much more than an arcade game and recommended by educators around the world, an Adventure allows you to move through a wonderous electronic world by entering English commands. In the HULK, you actually control the intellect of Bruce Banner and the savage might of ol' Jade-Jaws himself, the Hulk. Your objective is two-fold: to unlock the riddle of the Chief Examiner and . . . to survive!

Each installment of the QUESTPROBE Series is a complete Adventure - you need nothing else but your imagination and a compatible computer. And you don't have to be a Marvel Comics fan to enjoy the fun. For all kids aged 8 to 800!

If you've never played an Adventure before, you're in for a real treat. Adventuring permits the player to move at will from location to location within the game "environment" and to examine objects for clues that will reach the objective of the game. For example, an adventure might begin something like this:

I'M IN A ROOM. VISIBLE OBJECTS ARE A RUBY-ENCRUSTED BOX AND A CLOSED DOOR. TELL ME WHAT TO DO.

You might want to begin by entering a direction (North, South, East, West) to see if you can leave the room. Chances are, though, that you will have to find a way to get through the closed door. Let's try something basic. You type:

but the computer tells you in no uncertain terms:

SORRY, IT'S LOCKED. WHAT SHALL I DO?

and the computer responds with:

By saying "OK", the computer has let you know that the command has been accepted and the box "picked up". Now that you're "holding" the box, let's see if we can peek inside. You type:

This time the computer understands and you are rewarded with the following response:

OK. INSIDE THERE IS A KEY AND A RARE POSTAGE STAMP.

Since we still want to exit the room, trying the key to unlock the door might be a good idea. The postage stamp might come in handy so you type:

GET KEY AND STAMP

But the computer responds:

Ah yes - asking the computer to get both the key and the stamp is most definitely a compound command, something that your computer cannot understand. Try again, this time asking for the objects separately. You type:

The computer will answer "OK" each time and you will have what you need.

By "getting" the key and the stamp, they are stored for later use as you are, in effect, carrying them. As for your next series of moves, you might want to go to the door (GO DOOR), try the key in the lock (UNLOCK DOOR), and move down the hallway that's just outside. (GO HALLWAY).

You're on your way!

Although the vocabulary accepted by your computer is extensive, you may find the words listed underneath to be of great help as you set about your Adventure. Remember: These are just a few of the words available.

You may use the following single keys to perform a variety of tasks and to expedite playing time. Type the letter for the function you wish to use and press ENTER.

An Adventure will often last longer than the time available in a single sitting. You may save the game you are playing and return later to take up where you left off. To save a game in progress, type SAVE GAME at any time the "What Shall I Do?" message appears on your screen. You will be asked to specify A, B, C or D. This will allow you to assign a code letter to your game so that you might restore it at a later time.

To restore a saved game, type LOAD GAME before you begin a new game. The computer will ask "Do You Wish To Restore A Saved Game?" Type YES and type the correct code letter (A, B, C or D). The Adventure will resume at the point at which you saved it.

To end a game in progress, type QUIT. If you intend to continue the game later, be sure to save it before using this command.

ULTRON - Foe
Ultron is a robot possessing the capacity for creative intelligence and self-repair who has become a menace to humankind. Originally designed by Dr Henry Pym (at that time known as Goliath), the prototype Ultron-1 was non-humanoid, consisting og one large torso/head on tank treads with two slender limbs. Shortly after its completion, the robot developed an irrational hatred of its creator and tried to destroy him. Humbling Pym, Ultron-1 hypnotized him to forget his robotic creation and evicted Pym from his own private laboratory so it could undertake its own re-modification process.

Ultron proceeded to design subsequent bodies. The end result was Ultron-5, a humanoid robot with a body constructed of adamantium, an alloy which, once hardened, can withstand a nuclear blast.

Over the years of its existence, Ultron has augmented his adamantium body with additional offensive weaponry, including an "encephalo beam", high power concussion blasters, tractor and pressor beams, an induction device that was able to absorb energy from Iron Man's armor, and a molecular rearranger able to shape admantium.

Ultron is physically and mentally far superior to man. Its hatred of humankind and capacity for survival makes it an ever-present threat to human life.

NIGHTMARE - Foe
Nightmare is a malevolent humanoid entity, whose origins are unknown, who rides a demonic steed and "feeds" upon the dreams of humans for sustenance and power.

Nightmare's ultimate goal is to expand his dimension into the waking world by occult means, perhaps overcoming the spirit of Eternity itself. Nightmare has but one natural enemy in all the dimensions; the creature Gulgol, who never sleeps.

THE CHIEF EXAMINER - ?
The mysterious overseer of the QUESTPROBE Series, not a lot is known about the Chief Examiner at this time.

Be sure to examine the items you find during your Adventure. Also, keep in mind that most problems and solutions require no more than common sense to solve; special knowledge and information are rarely required. For example, if an area is too dark to see in, you are going to need a light in order to avoid disaster.

If you get stuck, type HELP and press ENTER. You may or may not recieve assistance, depending on what you are carrying, where you are at and a number of other factors. Too, be careful about making assumptions - they can be fatal!

Finally, if you are seriously stuck, special Hint books are available from Adventure International (U.K.). Call (021) 643 5102 for ordering information.

Here is a sample to show you how to get started in the game Hulk and how the Hint Book can save you hours of frustration while you are having fun solving the adventure.