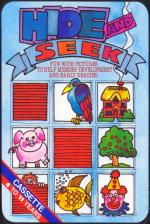 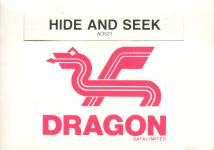 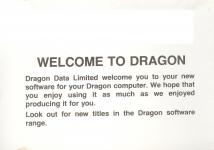 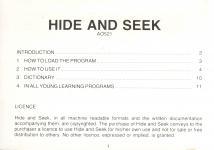 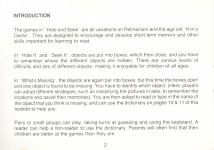 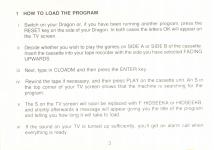 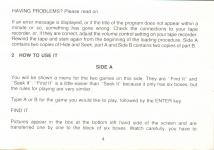 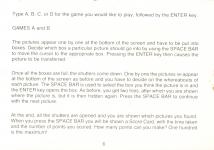 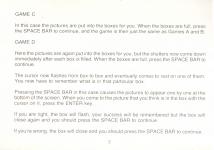 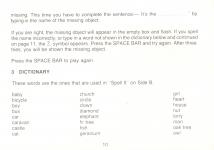 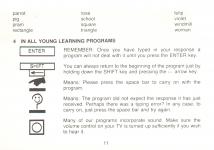 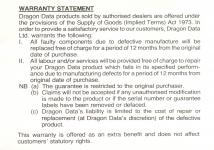 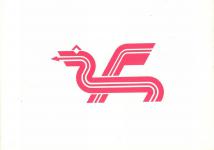 A very nice touch is the use of on-screen symbols to prompt the need for the space bar or re-entry of a word. Read Review

A sound educational program and well worth considering. Read Review

The games in Hide And Seek are all variations on Pelmanism and the age-old "Kim's Game". They are designed to encourage and develop short term memory and other skills important for learning to read.

In What's Missing, the objects are again put into boxes, but this time the boxes open and obe object is found to be missing. You have to identify which object. (Here, players can adopt different strategies, such as classifying the pictures in sets, to remember the locations and assist their memories.) You are then asked to read or type in the name of the object that you think is missing, and can use the Dictionary section below to help you.

Pairs or small groups can play, taking turns at guessing and using the keyboard. A reader can help a non-reader to use the dictionary. Parents will often find that their children are better at the games than they are.

You will be shown a menu for the two games on this side. They are Find It and Seek It. Find It is a little easier than Seek It because it only has six boxes, but the rules for playing are very similar.

Type A or B for the ame you would like to play, followed by ENTER.

Pictures appear in the box at the bottom left hand side of the screen and are transferred one by one to the block of six boxes. Watch carefully, you have to remember which picture goes in which box.

When all the boxes are full, shutters come down. One of the pictures then re-appears at the bottom and you have to decide in which of the six boxes it is to be found. Having decided, you can look in that box to see if you're right. Press the Space Bar to position the cursor into your chosen box and then press the ENTER key to open the box.

If you're right the box will stay open and you'll get another object to find, if not, you get another turn at locating the same picture but if you get it wrong again the correct box is opened for you.

When all the boxes are open, those whose contents you remembered correctly are flashed. Count them to see how well you did. After that press the SPACE BAR for another game.

In Seek It, you must now choose one of four different games to play. The first of these is hard, the others are worse! In every case you have to remember which picture went into which box, and there are now nine boxes.

Type A, B, C or D for the game you would like to play, followed by the ENTER key.

The pictures appear one by one at the bottom of the screen and have to be put into boxes. Decide which box a particular picture should go into by using the SPACE BAR to move the cursor to the appropriate box. Pressing ENTER then causes the picture to be transferred.

Once all the boxes are full, the shutters come down. One by one the pictures re-appear at the bottom of the screen as before and you have to decide on the whereabouts of each picture. The SPACE BAR is used to select the box you think the picture is in and the ENTER key opens the box. As before, you get two tries, after which you are shown where the picture is, but it is then hidden again. Press the SPACE BAR to continue with the next picture.

At the end, all the shutters are opened and you are shown which pictures you found. When you press the SPACE BAR you will be shown a Score Card, with the time taken and the number of points you scored. How many points can you make? One hundred is the maximum!

In this case the pictures are put into the boxes for you. When the boxes are full, press the SPACE BAR to continue, and the game is then just the same as Games A and B.

Here the pictures are again put into the boxes for you, but the shutters now come down immediately after each box is filled. When the boxes are full, press the SPACE BAR to continue.

The cursor now flashes from box to box and eventually comes to rest on one of them. You now have to remember what is in that particular box.

Pressing the SPACE BAR in this case causes the pictures to appear one by one at the bottom of the screen. When you come to the picture that you think is in the box with the cursor in it, press ENTER.

If you are right, the box will flash, your success will be remembered but the box will close again and you should press the SPACE BAR to continue.

If you're wrong, the box will close and you should press the SPACE BAR to continue.

The cursor will return to that particular box later.

The game ends when all nine pictures have been successfully located and once again you will be shown a Score Card.

Again you have a choice of games to play. Read It or Spell the Name. The main difference between the two is that with Read It, you only have to use the SPACE BAR and ENTER keys, whereas with Spell The Name, you have to type in the names of the objects. So, would you like to read, or spell?

Type A or B for the game you wish to play, followed by the ENTER key.

An object appears in the first box, and its name appears at the bottom of the screen. Read the name and remember which box that object is in, then when you are ready, press the SPACE BAR to continue. The next object, with its name, now appears and this continues until all the boxes are filled.

The shutters on the boxes are then lowered and raised, to show that one of the objects is missing.

You are now asked "What's missing?", and an object is suggested, for example "Is it the Church?"

Press the SPACE BAR to see all the alternative suggestions as to what is missing and when you think you have found the right one, press the ENTER key.

Remember where the objects are and when all the boxes are filled, press the SPACE BAR to continue.

The shutters are now lowered and then raised to show that one of the objects is missing. This time you have to complete the sentence - It's the ...... - by typing in the name of the missing object.

If you are right, the missing object will appear in the empty box and flash, if you spell the name incorrectly, or type in a word not shown in the dictionary below, the ? symbol appears. Press the SPACE BAR and try again. After three tries, you will be shown the missing object.