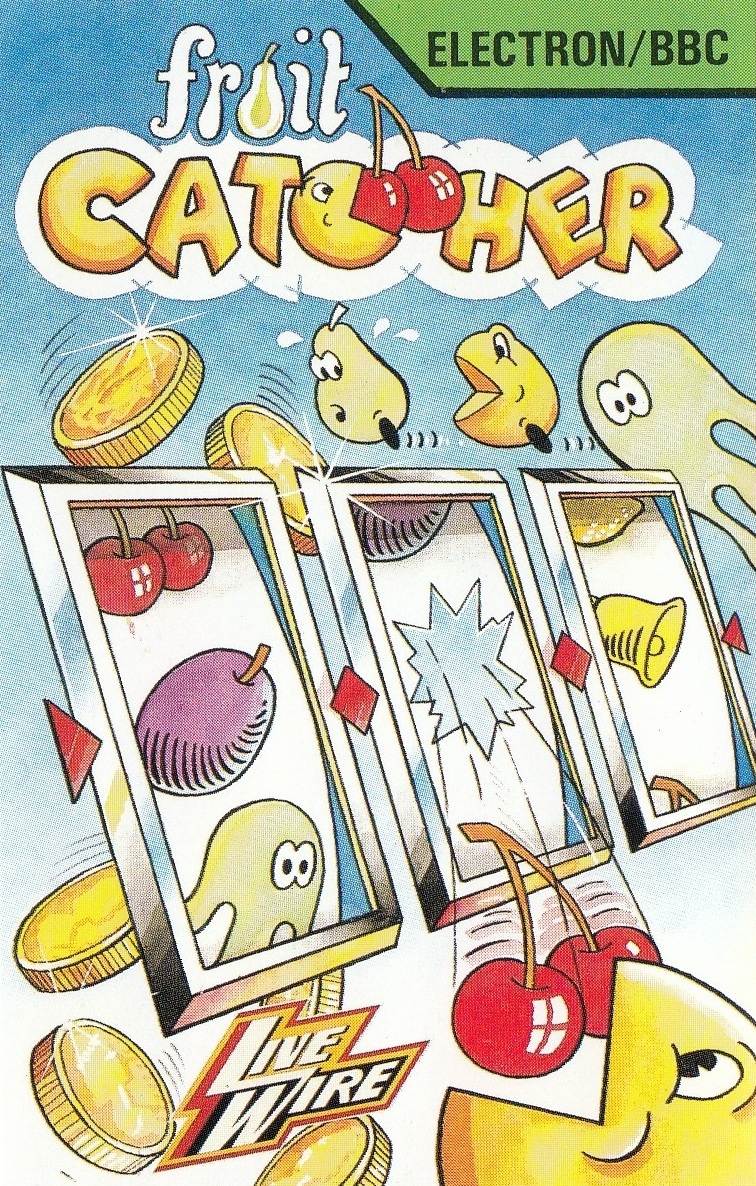 Insert your 20p and spin the reels on the left to advance the Fruit Catcher feature on the right.

Fruit Catcher is a simulation of the latest arcade fruit machines. Payouts are given when winning fruit combinations appear in the win line. If the winning fruits have numbers on them, they are totalled and the catcher is stepped around the maze by the same number of squares.

Nudge Feature. Nudges allow single step movement of a reel, and 2, 4, 6 or 8. Nudges are given depending on which nudge square the Catcher lands on. The nudge value may be taken or a gamble made for a higher number of nudges...

A realistic simulation of a novel game.

Go fruit machine crazy with Fruit Catcher - the fastest and most feature-laden one armed bandit simulation ever written! Whilst spinning, holding and nudging the reels on the left, keep an eye on the snapper feature to the right and aim for the £2 jackpot. Packed with colour and bonus features, Fruit Catcher is the ultimate in fruit machine pleasure with high quality graphics, sound effects, free spins, boosters and a gamble/collect feature!

Fruit Catcher is a fruit machine simulator that includes three reels of colourful fruit, bar, bell and snapper symbols. Spin the reels and match two or more to win instant cash. You win for any two identical symbols next to one another in a row. You do not win for two identical symbols separated by a different one.

Some combinations of symbols score fixed amounts. Two cherries, for example, win 10p. Others, for example two grapes, activate the Gamble/Collect Jackpot chain, potentially winning up to £2 if the gamble pays off.

The Gamble/Collect chain runs from 10p through 20p, 30p, 50p, 70p, £1, £1.50 and finally £2. When most winning combinations appear across the reels, two or three of these values will be lit up and darkened in quick succession. For example, two bells will activate the Gamble/Collect chain at the very lowest level - 10p, 20p and 30p will be highlighted one after another.

The player must choose whether to collect either 10p or 20p by hitting the "Collect" key when either icon is lit or to gamble 'up the chain' by hitting the "Gamble" key when 30p is lit. If he manages to do so here, then the 30p and 50p icons begin to flash in succession and he will have progressed one link 'up' the Gamble/Collect chain. This movement is repeated each time a gamble is accurately judged. If the player reaches the £2 jackpot, he can collect his winnings with the appropriate key.

If, however, the player misjudges when to "Gamble" he falls one link 'down the chain'. At the very lowest level (10p, 20p and 30p), he wins nothing and must spin again.

Certain combinations begin higher up the Gamble/Collect chain than others. Two strawberries, for example, start mid-way through the chain at 50p, 70p, £1 whilst three bars immediately start at the very top (£1.50, £2).

After any money you have won from the spin itself is awarded, the maze feature may operate if any of the symbols include a number in their top left corner. The total of any numbers that do appear is the number of places that "Snapper" will move in the feature displayed to the right of the reels.

The object of the feature is to guide Snapper to the £2 icon at the very top left hand corner of the maze. However, as soon as you spin the reels again, Snapper returns "home" (to the centre of the maze) so this is not as easy as it may at first appear.

If you examine this feature you will notice numerous icons on its floor.

If Snapper lands on the Cherries, Grapes or Melon icon then the player wins a free spin (and Snapper does not return home before it).

If Snapper lands on an arrow icon, Snapper 'jumps' a small section of the maze. (However, as Snapper will likely return home on the next spin, this is only useful to the player if he has been given a "Feature Held" bonus - see below).

If Snapper lands on the yellow, red, blue or magenta ghost, he wins 2, 4, 6 or 8 nudges respectively. The player may also have the opportunity to 'jump' a small section of maze between ghosts if Snapper moves from one ghost to the other and he presses "Collect" at the correct moment.

Finally, if Snapper lands on one of the three "Boost" icons, then the Booster bar is activated. A sliding scale of Snapper icons is increased from one to six as quickly as possible, corresponding to the number of extra moves Snapper may be given. The player should accurately judge how much farther he wishes Snapper to travel and hit the "Boost" key on the correct strength.

When you are awarded nudges (because Snapper has landed on a ghost icon), the small Nudges bar at the bottom of the screen will display the amount of nudges remaining. You can nudge any of three reels down by pressing the appropriate number key.

If you create a winning line before you exhaust all your nudges those that remain are lost.

Occasionally, you are given the option to "hold" any or all of the three reels when you spin again. If so, the word "Hold" will flash in black and white under each reel and you should press the appropriate number key for the reels you wish to hold, whereupon the word will be lit up in blue. To free a reel again, press the appropriate key for a second time.

You can choose to hold reels not just for the symbol they display - but also for the number of moves Snapper will make again after a 'new' spin!

This useful bonus is awarded at random. When operational, it prevents Snapper from returning home every time the reels are spun again. It is lit up in the large green box in the top right of the screen. Once awarded, it is only cancelled by winning the £2 jackpot.

Fruit Catcher runs in demonstration mode whenever it is left idle!