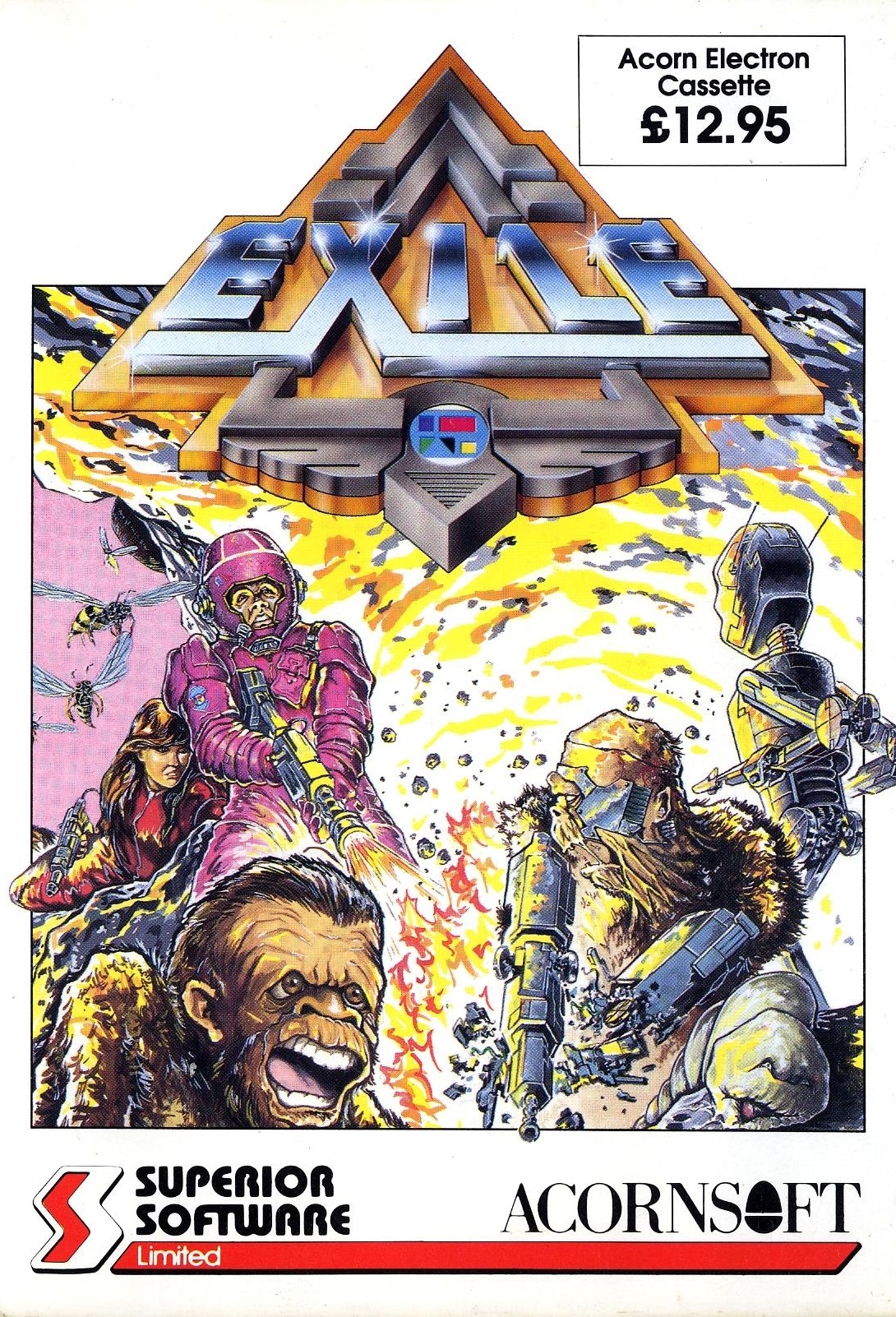 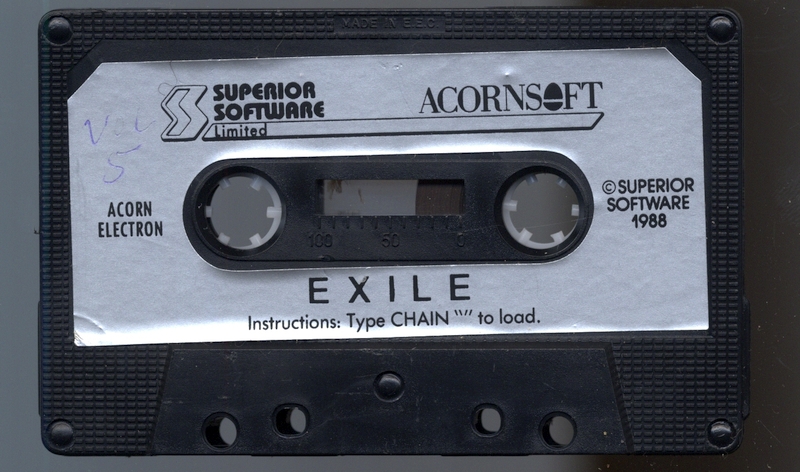 A huge graphic adventure featuring realistic inertia, thrust and gravity in which you must recover the engine to your spacecraft from deep within the caverns of a hostile planet.

The planet Phoebus has been taken over by an exiled, evil Genetic Engineer, named Triax. In a complex warren of caves, he has built an evil world inhabited by eccentric robots and strange mutated creatures, such as blue monkeys, giant wasps and sharp-toothed eyeless maggots. On the planet surface and around the caves are scattered the debris of a previous mission, and maybe some of the members of that ill-fated venture still remain.

Have you the skill and cunning to conquer the world of the exile? Are you of elite status? If you take up the challenge, you will have to carefully pick your way through the massive cave system, solving complex puzzles along the way and ruthlessly destroying the alien creatures until finally you face the evil one himself.

'I liked many aspects of the game: its attention to detail; the windtunnel - like dust effects in the windy areas; the water bubbling in the flask; the sparks in the fires; and being able to aim your gun at any angle. It's definitely the best game this year.' ... Acorn User

'Exile is even more enjoyable to play than Elite or Zarch.'...David Braben (co-author of Elite, author of Zarch)."

On your return from another mission, you are made to divert to the planet Phoebus by Columbus Force High Command with orders to overpower the psychopathic Triax and eliminate his evil maggot creations lest they are let loose on Earth to wreak havoc on its innocent population.

You arrive alone and weaponless. Your spacesuit is under-equipped; its jetpack weak and its weapon slots empty after the toils of the last mission.

Parking your spaceship in geostationary orbit, the wreck of the Pericles on the planet far below, you are visited.

The blurred image of an emerald spacesuit appears...and disappears. Your Destinator is stolen. Now, as for the Pericles' crew, you are marooned. Your spaceship, no longer able to take you off this planet, floats powerless in orbit.

Only if you retrieve your Destinator can you escape from the planet of the exile.

But you have a mission to do first.


Exile has the facility to let you save and load your game position onto your own cassette. This is done from the Supervisor program.

The options in the menu are straightforward. They are:

When you wish to exit the game in preparation for running the Supervisor (for example to save your current position) you should:

You'll soon get the hang of this odd process (which is necessary because Exile uses every last byte of memory there is in your micro, so the game position saving routines and score calculations had to be put in a separate program).

The stages of a typical playing session would be:

Cassette users that want to save their game position quickly without having to re-run the large Supervisor program can run the very much smaller file called "QSAVE" which is the last file on the tape. To do this type CHAIN"QSAVE" then press PLAY on your tape player. (You may have to rewind a small way if your tape player hasn't got motor control)

The first time you play the game you will not need to load in a previously stored position (stage 2). The game will run using the default data - the game will start from when you first reach Phoebus.

(Note: Pressing BREAK from the program looks as if it's doing what SHIFT-f9 does but this will not work properly)


Your proficiency as one of the Columbus Force special agents is scored in the following way:

You are given an overall score (shown on the status screen of the loader program) which is calculated as the sun of the following five components:

So you see the quicker you are and the less you get "killed" the higher your score.

(Note: the creatures of which there is an infinite supply will not score you anything - for example, wasps out of hives, although you will score for the hive itself).

Playing Philosophy
Exile has been designed such that there are many ways of solving and resolving each of the various problems and puzzles that you will encounter beneath the barren wind-swept surface of Phoebus.

Just like in real life you will at time be exultant and at others frustrated by the problems set before you in the planet of the exile. Remember, if at any stage you are having great difficulty then stop and make use of your greatest weapon in your mission to defeat the mad Triax. The one thing you should always wield is ... your brain (It's not just for head butts you know). If you are finding the going rough then you are more than likely doing things wrong. There is always an easy way.

Using Guns as Tools
Everything in Exile has mass, varying from the heavy boulders to the light wasps. On all impacts conservation of momentum applies so that you may get the same impulse (and so be knocked back at the same velocity) from a light fast-moving object as from a heavy slow-moving object.

Because of this you can use your guns as tools to move heavy objects around. The second gun (the icer) has heavier properties than the first gun (the pistol) so it will knock things back more effectively. Note, however, that it uses up your energy much faster.

The impulse imparted to the target from these collisions depends on the direction of motion before impact, so for example aim and fire upwards to give the target an impulse upwards.

Notice that impacts with the ground and other objects will be dampened by friction - the stuff that stops tyres slipping on roads. So you might be able to move heavy objects across the ground quicker if you get them off the ground by shooting at them not sideways but slightly upwards.

Note also that heavier objects are less affected by winds than light objects.

Enemy Sight
The creatures and robots on Phoebus tend to aim for the centre of your body and will not "see" you if the terrain crosses a line joining their centre with your centre.

We, as the authors of Exile, would like to express our gratitude to the following people for their useful involvement in the Exile project to date.

Richard and Steve Hanson for their patience and hard work,

Mark Cullen for trying to write us a novel,

Jon (not to spelt John) Griffiths and the David Braben for their ridiculous and inane suggestions for improvements,

Mark Lomas (proto-PHD) for putting up with us,

Giles Morgans for having to play-test the game only a few weeks before its release,

Chris Hart and Kevin Edwards for lending their expert skills,

Jacqui Lyons for her incredulity of the elastic completion date and for being our agent,

Greene King for keeping us numb between programming sessions (and sometimes during),

...and many others (especially those that have got nice things to say about the game).

Those who need help to read the slippery slopes of the underworld can taste the delights of the Dark Chapters by reading these clues below. They should, out of respect for the Innocent Ones, brand themselves with the words "I have read from the Dark Chapters".

The italicised parts give some indication of the content of the text (so you can choose whether or not to read the whole clue).

Chapter One (for mild sinners of those finding the going tough)
What would you say if I told you that all the following text is random gibberish? There's still time to turn back you know.

Only the green/yellow metal doors are easily destroyed by grenades. (Place the grenade near the door.)

To get the grenade in the lower space-ship, stand on the undercarrage beneath the tubes and do a boost-jump and thrust up at full speed flying through the tubes to knock the Cannon with your head.

Put out fires with the flask that has been filled with water.

Transport beams can be shot through.

Pink grubs should not be allowed to be killed unnecessarily: you will need to make use of some of their properties deep to the east, to solve some problems.

Chapter Two (for experienced sinners)
Grubs and worms appear from rocky ground (not from the "tile brick" ground). They are attracted by noise and are more abundant deeper down.

Two grenades are better than one. (Pretty obvious eh?)

Feed imps with their natural food. (What?)

Fluffy can be pushed through the horizontal cracks. (So...?)

Chatter can be fed with coronium crystals. (Where from?)

The green frogman can be pushed back using the block and pink frogman. You will need to help the pink frog to push by...?

Chapter Three (for those past hope)
The green frogman can be fed what?

Coronium rocks can be floated on the large block.

Use the Pink Frog to push you through mushrooms.

Get the Radiation Protection Pill out of the small cavern by using a piranha fish.

The easy way to push an object through a horizontal crack (if it is slightly taller than that crack); while hovering vertically, hold the object next to the crack, then press the lie-down key and thrust sideways into the crack throwing the object sideways, then shoot it through the rest of the way.

You're on your own now.

Note: Some inaccuracies in this item have been reported and we're working to fix them!