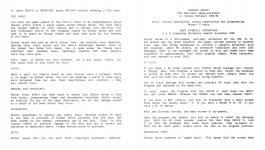 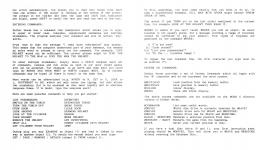 If you own a disc drive and like adventure games, then don't hesitate to buy Enthar Seven - you won't regret it. Read Review

An enjoyable and baffling adventure, and a very good buy. Read Review

The text is lengthy, interesting and incredibly atmospheric, and you can do some very complex things with some of the objects... It took me about twenty minutes to solve the first problem but, once done, the fun really begins! Read Review

If this standard is maintained, Robico is going to be well worth following and I would recommend that you buy all it publishes. Read Review

Enthar Seven is a disc-based, text only adventure for the BBC B and Electron. The game, written entirely in machine code, uses disc filing techniques to provide a massive adventure with 450 locations, about 80 objects, an extensive vocabulary and over 1,200 messages. Most of the messages are stored on disc and these have been compacted (by the same methods used in our cassette-based games) to approximately half their original length. The fact that the program accesses the disc so frequently means that responses are not as fast as in, say, ISLAND OF XAAN.

Insert the Program Disc into Drive 0. Hold down the SHIFT key and press BREAK. Release the BREAK key and then release SHIFT.

Select 'P' (for Play) from the menu. If you have a 40 Track system, remove the Program Disc and insert the Database Disc into Drive 0. With 80 Track, the Program and Database are on the same disc.

Enthar Seven operates in 'paged mode'. This means that the screen does not scroll automatically, but allows you to read text which fills more than one screen. If the cursor is flashing at the bottom of the screen and the prompt is not visible, press SHIFT to scroll the text and read the rest of the message.

Enthar Seven has an advanced command line interpreter which allows you to type, in upper or lower case, complete, unpunctuated sentences and multiple statements. The program analyses your command and acts on certain 'key' words.

From time to time, the message "I need more information" may appear. This means that the computer understood part of what you typed, but needed an extra word or phrase to carry out the command. For example, GIVE HELMET would not be sufficient. The correct phrase might be GIVE HELMET TO MAN or GIVE THE MAN THE HELMET.

To enter multiple statements, simply leave a space between each set of commands. For example, to go NORTH and then West, you could type NORTH (space) West on the same line. Up to sixteen commands can be typed (if there is room!) on the same line.

Most words can be abbreviated (e.g. NORTH to N, GET to G, LOOK to L, SOUTHEAST to SE) which not only saves you typing, but also allows the vocabulary list on disc to be accessed more quickly and hence shortens response times. If in doubt, type the complete word!

Here are some possible commands to help you get started:

During play, you may EXAMINE an object (1) and find it linked in some way to another object (2). To obtain the second object, you must type:

To KILL something, you must state exactly how you wish to do so. To take a hypothetical example, KILL MAN WITH SPEAR might become THROW SPEAR AT MAN.

The program has a limited understanding of the words IT and THEM. They act on the last object mentioned in the current line. For example, LOOK AT THE HELMET THEN WEAR IT.

Another word understood by the program is Where. This can be useful when you are unable to recall Where you left an object. In some cases, if you haven't yet seen an object for instance, the computer will respond with "I'm not sure". The exact location of an object is given only if you possess it, or if it is the same location as you are. In other cases, a message covering a range of locations should be enough to jog your memory! For example, if you type WHERE IS THE HELMET when you first start the game, you will receive the response: "Look around!", meaning that it's nearby.

To repeat the last command line, the first character you type must be an asterisk (*).

As well as the normal instructions associated with adventures, Enthar Seven also provides a set of System Commands. These all begin with a '@' character and do not increment the move counter. A complete list of these commands, together with their meanings, is given below:

If you have a dual disc drive (0 and 1), your first instruction when playing should be @DRIVE1. This will allow you to @SAVE and @RESTORE without removing the Database Disc.

To @SAVE and @RESTORE, insert your 'saved game' disc into the disc drive currently selected and, when requested, type a filename in the usual way. To abort @SAVE or @RESTORE, simply press the RETURN key without entering a filename.

You start the game seated in the Pilot's Chair of an Interplanetary Space Hopper which orbits a small planet called Enthar Seven. You must leave the Hopper before its orbit decays and it spirals into oblivion! You will eventually arrive in the Command Centre on Enthar Seven and your task is to board an Escape Vessel and leave the planet.

Enthar Seven is an Earth-like planet and was once, indeed, an Earth Colony. Now, all but a few of the colonists have departed, leaving their robot slaves and the native Entharians behind. Much of the planet has fallen into decay, but in some areas the robots have continued their mundane tasks, seemingly unaware that their masters have long since gone.

This, then, is where you find yourself. Not a bad place, really, but who'd want to stay there forever?

If you find yourself hopelessly stuck, simply write your query on a separate piece of paper, enclose it with your S.O.S. Card and a S.A.E. and post it to us.

Previous Next
ISS Emergency (30th October 2019) (Commodore 64/128)
You are on the International Space station. A loud siren makes it hard to think, but you know you must quickly find the problem and fix it before it's too late!