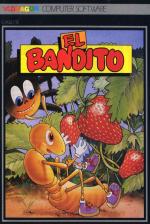 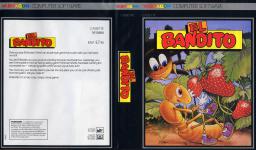 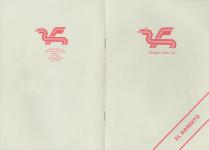 Playing this gave me a lot of laughs and I shall certainly be playing many more times. Read Review

Unless you've got a friend to compete against, there isn't really much to this. Read Review

Dare you play El Bandito? Here's an arcade style game that could make your hair stand on end!

You are El Bandito and you go around looting the local countryside but, surprisingly, you aren't the baddie in this hair-raising game! There are horrific Araneidae roaming the countryside too - menacing spiders which pursue you at every turn!

You must carry your bounty back to your lair, the only place you can be sure of being safe from the spiders. Will you make it?

El Bandito is a crafty little creature who scurries around, looting the local countryside. Your goal as El Bandito is to achieve the highest score by returning bounty to your lair while skilfully dodging the menacing spiders that pursue you at every turn.

At the start of each game, a skill level is chosen by pressing a number key from 1 to 8. Next, a playing field is selected in the same manner, adding more complex combinations of side passages and tunnels as the level is increased. Side passages are openings which connect the left and right sides of the playing area, whereas a tunnel connect a hole in the centre of one area to another area with such a hole. Spiders cannot use either type of passage. Manoeuvring your bandito through the passages and into tunnels adds tremendously to the fun and excitement of this game.

The centre of the playing screen depicts two lairs where the banditos start and where they return with their loot to score points. By moving their joysticks, the players race through the surrounding areas collecting and returning their loot. The left joystick controls the left lair and bandito while the right joystick controls the right one. Spiders and your opponent are prohibited from entering your lair, so you are safe there.

To pick up an object, move adjacent to it and it will be picked up automatically (unless you press the joystick button) whereupon El Bandito will disappear under the heavy load and can now carry it slowly back to your lair. To drop an object, just press the joystick button and move away. You can now make a speedy getaway from an approaching spider, but watch out... the loot can be picked up by your opponent when playing a two player game.

Player scores are displayed on their respective sides at the top of the screen. An L or R will be found to the left of the score along with another number representing plays remaining. Players start the game with three plays and a new bandito will appear in your lair each time you get caught by a spider until all plays have been used. The highest score reached is displayed at the top centre of the screen to allow competition between any number of players.

* Plus an extra Play Bonus

Press the 1 key selects the single player mode, which is the same as the two player game except that there is no left player. Press the 2 key to restore the two player mode. A special TIME OUT feature is provided which freezes the game action any time the T key is pressed. Press U to unfreeze and resume play. After a game is over, you may press R to start a new game repeating the same skill level setup. Pressing any other key allows new levels to be set. Pressing the S key stops a game in progress after which you may press R or any other key as described above.