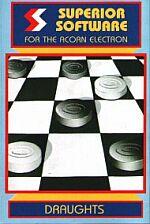 Is this the right version of Draughts? Some machines received different versions with the same name. 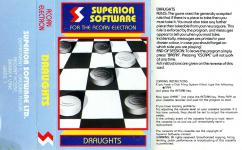 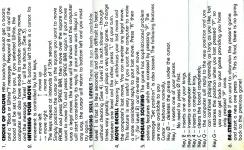 The game uses the generally accepted rule that if there is a piece to take then you must take it. You must also take any further piece then takeable from your new square. This rule is enforced by the program, and messages appear to tell you when you must take.

Incidentally, messages are printed in your chosen colour, in case you should forget on which side you are playing!

To leave the program, simply press BREAK. Pressing ESCAPE will not work at any time.

After loading, you should get a board, and a "Black or White?" message. Respond B or W and the board will be set up for you. If you selected White, the computer will also have made its random opening move, and the message "Level 1" will be shown (see 3).

At the bottom left there is a cursor. Its movement is controlled by four arrow keys. The keys repeat at intervals of 1/5th second.

Simply position the cursor on the square you want to move from and press SPACE, then move over the square you want to move to and press SPACE again. If your move was a legal move, the move will be shown and the computer will start considering its reply. If your move was illegal in any way, the cursor will return to bottom left and you must try again.

There are two levels available. Level 1 is fast (a few seconds) and quite difficult to beat without cheating (see 4). Level 2 is much slower - though times vary greatly - and plays a very skilful game. To change between one level and another, press "L" at your turn.

The game has sophisticated problem solving features which are accessed by pressing "P". The message "Set position" is also issued. The following features are now available to you:

If you want to abandon the present game, and start a new one, press "S". This is final, there is no going back to the previous game!