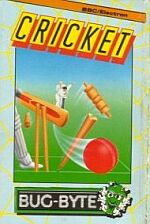 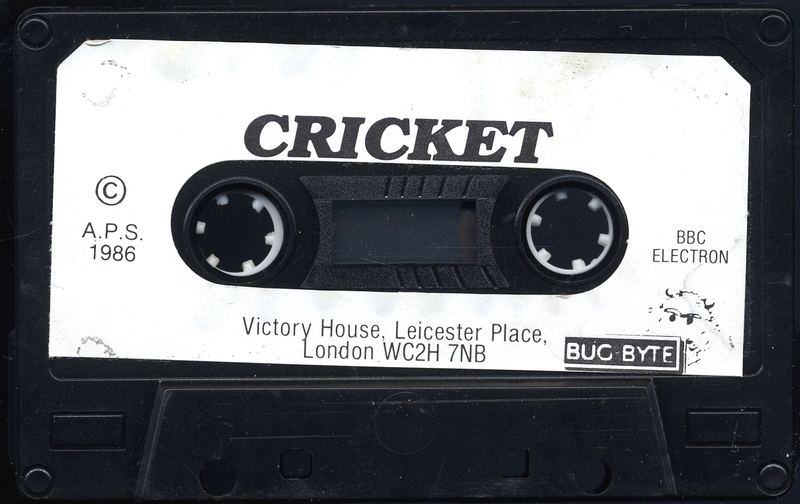 A game notable for the quite startling failure to adhere to the rules of real cricket, and for being packed with bugs. Play it to believe it.

"First set the field, the pace, one player or two, and then thunder down the wicket to try and beat the 'Merry Hackers'. It's fully animated action by Margaret 'owzat' Stanger."

It is Summer 1985. The Merry Hackers and The Naughty Nuns are looking forward to their annual game of cricket. Unfortunately the sunshine went AWOL. This was a bit of a blow so they set about writing a computerised version. Many happy nights were spent in the local huddled around a computer, playing cricket. It is here that I come in. Wandering into the "Rue Barbe" I found a copy lying on a table. After trying it out, I wanted to sell it to a brilliant, fabulous company called 'Big Byte' or 'Bog Boot' or something like that anyway. I spent a year making the game suitable for the average person you know, de-bugging it and sobering it up. Here it is! I hope you like it.

It is summer and the village cricket season is in full swing. A touring team (The Merry Hackers Circus) has been challenging teams from the local pubs. The regulars at the 'Frog and Ferret', 'Pig and Whistle' and even the 'Brahms and Liszt' have hopelessly lost. Can you succeed where others have failed?

The computer displays the field and players, and asks the user to decide between one player or two player game. This is one day cricket so there is a choice of 10, 20 or 40 overs for each side. The team name or names are entered and the scoreboard displayed. Press 'C' to continue.

The visitors' team consists of the computer in the one player game. The instructions for moving the players are shown, and the game is started by pressing 'COPY' for keyboard operation or 'FIRE' if joysticks are being used. The bowler only is controlled as he bowls towards the pavilion end; the fielders are controlled by the computer. The second player, or computer in a one player game, controls only the active batsmen.

Move towards the wicket and press 'SPACE' to bowl. If the ball misses the wicket, the batting side is awarded one extra. If the batsman is bowled out, he starts walking off, the bowler gloats a little and the scoreboard is shown again. If the ball is hit, the batsman can take up to four runs or he may score four or six as in normal cricket.

At the end of each over the scoreboard displays the latest scores and the bowler changes ends. If 'F' is pressed when the ball is out of play, the overall view of the field is shown and the fielders can be re-arranged by the bowling side only (if desired). The bowler may also change his style of bowling at the same time by pressing '5' for slow, '7' for fast and '9' for spin bowling. To move the fielders, move the cursor with the movement keys used in the game until it is over the fielder. Press SPACE to pick up the fielder and move to new position. Place fielder by pressing COPY.

Note: You cannot put a fielder between the wickets. The bowler and wicket keeper are displayed in a different colour and cannot be moved.

The batsman can be caught, bowled or run out. When they are all out, or the innings is finished, the score is displayed again. Hit the stumps at the far end to run out.

The final score is given at the end of the game, and a new game can begin. Either side can end the game at any time by pressing ESCAPE.

Or joystick control for 1 or 2 player game.