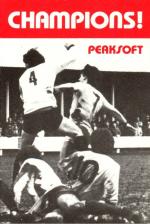 Is this the right version of Champions!? Some machines received different versions with the same name. 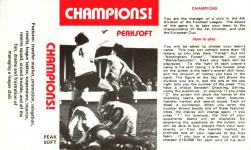 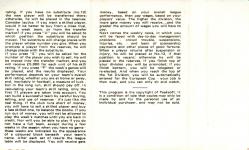 The novelty soon wore off and the routine of management made it hard to persist. Read Review

You are the manager of a club in the 4th Division of the Football League. The objective of the game is to take your team to the championship of the 1st Division, and into the European Cup.

You will be asked to choose your team's name. This may not contain more than 10 letters, so you may have "Forest" but not "Nottingham Forest", "Wolves" but not "Wolverhampton". Next your team will be displayed. To the right of each player's name is his skill rating, 1 if the lowest.

Also on the screen is the team's overall skill level, and the amount of money you have in the bank. The figure at the top left shows the division you are in, and the one at the top right tells you the number of the week.

You have a choice between Checking, Selling, Using the substitute, or Playing.

If you press "C" the screen will show the names of the oppositing teams and two other features: the Transfer Market and Reserve Squad. Each of these is numbered.

When you enter the number shown beside one of these features' titles, the display will change again. If you press 1, for example, the first of your opponents' teams will be displayed. By answering the questions on the screen, you will be able to buy players from your opponents, or from the transfer market, or promote one of your reserves to the first team.

If you buy a player, you will be charged £10,000 for each unit of his skill rating. If you have no substitute (no 12) the new player will be transferred there; otherwise, he will be placed in the reserves.

Consider tactics: if you want a skilled player, would it be better to buy from a close rival, from a weak team, or from the transfer market? If you press "U" you will be asked to which position the substitute should be moved. The substitute will change places with the player whose number you give.

When you promote a player from the reserves, he will change places with the substitute.

If you press "S" you will be asked for the number of the player you wish to sell. He will be moved into the transfer market, and you will receive £5,000 for each unit of his skill rating. If you press "P" the week's games will be played, and the results will be shown. Your performance depends on your team's overall skill rating, whether you are at home or away, and, inevitably in football, a measure of luck - but in the long run, skill should pay off.

In calculating your team's skill rating, only the first 11 players are taken into account. You can build a successful team by careful buying, selling, and use of reserves - it's just like the real thing.

If the club runs short of money, you will have to sell a skilled player, and buy a less skilled one, to balance the books. If you run out of money, you will not be allowed to play the week's matches until you are back in credit. Nor will you be able to play if you do not have a full team, except during a few weeks in the season when you have no game - these weeks are indicated by the appearance of a coloured block underneath your team's name. After each set of results, the league table will be shown. You will receive gate money, based on your overall league performance, then pay wages, based on your players' value. The higher the division, the more gate money you will receive ... and the greater the amount of wages you will have to pay.

Next comes the weekly news, in which you will be faced with day-to-day management problems - crowd trouble, suspensions, injuries, etc. - and learn of sponsorship payments and other pieces of good fortune. When a player returns after suspension or injury, he will be placed at No. 12, if that position is vacant; otherwise he will be placed in the reserves. If you finish top of your division, you will be relegated or re-elected. And when you reach the top of the 1st Division, you will be automatically entered for the European Cup - your job is then over, and you can only sit and watch.