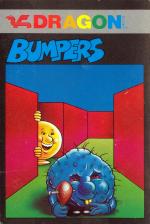 Fun, if you like this sort of thing. Read Review

Introduction | Playing The Game | Game Controls | Loading
Bumpers is an exciting one or two player game in which you attempt to successfully navigate through a randomly generated maze. However, the difficult part of the game is that the walls of the maze are invisible until you touch them and can contain booby traps. The ability to vary the size of the maze, plant your own booby traps and be able to "zap" your opponents around the maze, makes Bumpers a highly skilful, strategical game.

The program starts by asking you to define the game controls.

To select the number of players then move the joystick from left to right and press fire.

The maze size is decided by two parameters - the width and the height. These are again selected using the joystick and fire button. As the maze width and heights are entered separately, unusual sizes can be formatted which add to the variety of the game. The winning strategy necessary for a small maze is quite different than that of a large maze, resulting in greater enjoyment for the players.

If you are playing alone, then you have to set the skill level at which the computer plays you. Level 1 is relatively easy, while level 4 requires a far higher standard of play. This is again set by using the joystick. If there are two players, then to commence the game, both fire buttons have to be pressed simultaneously. One player starts at the top left-hand corner while his opponent starts at the bottom right-hand corner. The object of the game is to reach your opponent's starting point.

However, there is only one correct path through the maze, and there is the added risk of booby traps hidden in one of the three walls of each dead end. If these traps are set off, then the player is immediately returned to his starting point, but fortunately each of these traps only works once.

It is possible for each player to set additional booby traps on any wall of the maze by following this simple procedure: Position yourself next to the wall where you want to set the booby trap, centre your joystick and press fire (at the same time a tuny is played which warns your opponent). Be careful when setting booby traps as they can also 'zap' you, and due to the fact that you can only lay three traps at one time, until your opponent sets one off, then you cannot lay any more. So if you set one off yourself, then you restrict your supply of traps by one.

Another feature of Bumpers is that when you come into contact with your opponent, you can 'zap' him to a random location in the maze by pressing the fire button as you overlap your opponent.

Hint: If your opponent is about to win, then it can be to your advantage to hit one of your own booby traps - return to your starting point and protect it by using the above method.

Use a joystick plugged into the left hand port.