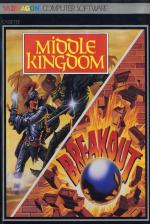 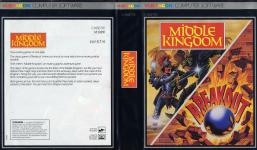 One of the drawbacks with tapes offering more than one game is that the programs tend to be of rather less-than-average quality. Middle Kingdom/Breakout is, alas, no exception. Read Review

Breakout is a machine code version of the arcade classic. Your task is to keep the ball in play for as long as possible while knocking bricks out of a wall as it descends towards you.

On starting a new game, the ball will move towards the top of the screen as the bricks start moving down. If you miss a ball, another will be placed upon the screen providing you have some left. The number of balls remaining is shown at the bottom left of the screen.

When the game is over, press the Space Bar to restart.

If using a joystick, it should be plugged into the right hand joystick port.

The object of this real time graphic adventure is to become the ruler of Middle Kingdom. This is achieved by returning the three Magic Rings to the sanctuary. The Magic Rings have been randomly scattered throughout the Kingdom and to recover them you must search the rooms of the Catacombs, Temple and Pyramid, but be warned there are main different monsters lurking in the rooms.

Firstly, you must decide the skill level, this determines the number and complexity of rooms and hence the difficulty of the adventure. Skill level 1 is the easiest.

You then must choose your character - a magician, a merchant or a warrior. Spells are more powerful than weapons.

The last question asks for the speed at which messages are displayed on the screen. If you are playing this adventure for the first time, it is recommended that you select the slow speed.

You will initially appear in the sanctuary. To move your character use the appropriate arrowed keys on the Dragon keyboard.

As you move around the Kingdom you will find the various objects. To pick up any of the treasures, weapons or spells simply walk into it. However in some of the rooms a monster will appear and you must defeat it before you can leave and continue your exciting adventure. The longer you remain in a room, the greater the chance of being attacked.

During combat a flashing cursor will appear on the selected weapon. To change the weapon simply type the number which appears above the weapons during combat. When it is your turn the weapon selected at that time will be used. Some weapons have a higher chance of hitting the monster, but do less damage. If you use the same weapon too frequently the weapon's performance will drop and may eventually break. The fireball and lightning spells are very powerful and will do a lot of damage, but should only be used infrequently. The stun and petrify spells will finish the combat if they work, but should also be used infrequently. If no weapon is currently selected, the message "you hesitate unsure" will appear. To defeat the monster you must reduce its strength to zero.

The game ends if your strength reaches zero or when you have returned the three Magic Rings to the Sanctuary.