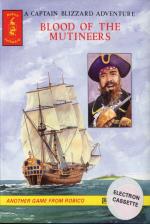 One of the best ever memory-based adventures for the BBC. Read Review

A Captain Blizzard Adventure - Blood Of The Mutineers

This superb text adventure from Robico is the first in a series of stories featuring that scourge of the seas, Captain Blizzard.

Whilst in search of the treasure of the Great Skull Temple, the Captain is confronted by the mutinous crew, forcing him to draw upon his own iron will, his calm intellect, his skilful seamanship and his devious resourcefulness!

This brilliant adventure reads like a book and plays like a dream. It has a huge landscape atmospherically described with reams of beautifully written text. It has over 50 objects and uses the Robico Advanced Parser. But be warned! This is our most difficult adventure to date!

"Every conceivable corner of this game has been jam-packed with devious puzzles... if you have played a Robico adventure before, you will know that you are on a winner with this one!" Beebug

"Robico are now indisputably the number one software house for Acorn adventurers... Blood Of The Mutineers is one of the most stressful as well as enjoyable text adventure games that I have played for quite some time! The puzzles are hard but fair and fascinatingly complex and original in their construction. ...Great stuff!" A&B Computing

This superb text adventure from Robico is the first in a series of stories featuring that scourge of the seas, Captain Blizzard!

Whilst in search of the treasure of the Great Skull Temple, Blizzard is confronted by his mutinous crew who are set on taking the booty for themselves! The Captain is forced to draw upon his iron will, calm intellect, skilful seamanship and devious resourcefulness to evade the frenzied sailors and claim the treasure as his own!

Blood Of The Mutineers reads like a book and plays like a dream! It has a large landscape, atmospherically described with reams of beautifully written text. It has over 50 objects and uses the Robico Advanced Parser. The adventure was written using Midge IV which achieved an astounding 59% compression on the location descriptions. In other words, if a line were 100 characters long, it would be stored in memory in only 41 characters. It is using advanced programming techniques like this which allows Robico to pack so much into your computer!

To load and run the adventure, type CHAIN"" (RETURN).

The BBC version uses Mode 7 with coloured text and a complete screen. The commands OG, MONOCHROME and COLOUR are allowed.

The Electron version runs in Mode 6 in black and white. It uses part of the screen to store data. OG, MONOCHROME and COLOUR cannot be used.

Blood Of The Mutineers uses the Robico Advanced Parser. This allows you to type, in upper or lower case, full sentences and multiple statements. The program analyses your command and acts on certain 'key' words.

The Robico Advanced Parser allows 'described objects' to be used in a game. For example, this adventure contains a LARGE LENS and a SMALL LENS. Sentences such as PICK UP ALL THE LENSES AND PUT THE LARGE ONE IN THE SPYGLASS are understood. From time to time error messages may appear. "I need more" (or similar) means that the computer could understand part of your command but needed an extra word or phrase to complete the action. For example, PUT LARGE LENS would not be enough. The correct phrase might be: PUT LARGE LENS IN SPYGLASS.

The message "Specify, matey!" appears when the computer has a number of options open to it and is not sure which one to take. For example, if both lenses were present and you typed PUT LENS IN SPYGLASS the computer would reply: "Large Lens. Small Lens. Specify, matey!"

"With what?" means the computer required you to specify an object. To take a hypothetical example, KILL MOUSE WITH POISON. The same applies to the message "At what?"

Other error messages may appear from time to time which either mean that Blizzard is unable to perform the desired action for some reason, or that the word you have entered is not in the game's vocabulary.

Blood Of The Mutineers has a large vocabulary and a very user-friendly command line interpreter and so, if having had several attempts at trying something and re-phrasing your command, you cannot make Blizzard do the required action you can be assured that you are on the wrong track!

All the above errors cause the computer to stop performing multiple statements and return control back to you.

Multiple statements can be entered by separating them with the words AND or THEN or with full stops (.) or commas (,). The maximum line length is 78 characters.

Words can be shortened, the abbreviation depending on where the word comes in the vocabulary list. For example, GET becomes G, LOOK becomes L and EXAMINE becomes EX. There are twelve directional commands which all can be abbreviated: N, S, E, W, NE, NW, SE, SW, U(p), D(own), I(n), O(ut). If in doubt, type the complete word!

ALL, EVERY and EVERYTHING and BUT/EXCEPT FOR may be used with GET, DROP, EXAMINE and their various synonyms and also in actions relating to doors.

OPEN ALL causes every openable window and door in the room to be opened. You may also OPEN ALL THE DOORS EXCEPT NORTH.

CLOSE/SHUT operates in a similar way to OPEN and remember you may also EXAMINE WINDOWS or DOORS.

SAVE saves your current position to a cassette or disk.

QUIT restarts the game from the beginning.

MONOCHROME sets a black and white display (BBC only).

OG (go backwards!) allows you to retract a move you wish you had not made - rather useful in deadly situations. Multiple OGs are not allowed and OG only works on the BBC.

All the usual adventure commands are understood.

GET/TAKE allows Blizzard to pick up an object, while DROP leaves it behind. THROW may be used in a similar way to DROP or you can THROW OBJECT AT something. EXAMINE allows Blizzard to take a close look at something, while LOOK gives a long description of his surroundings. INVENTORY/LIST gives a list of Blizzard's possessions and SEARCH allows Blizzard to make a detailed examination of his current location. Other useful words are CLIMB, JUMP, CUT, PUSH, WAIT and READ. WHERE is a very useful word! WHERE IS BLIZZARD is similar to LOOK. WHERE IS THE OBJECT will tell you where you can find a particular object.

Blood Of The Mutineers is a difficult game. Read all the messages very carefully since they will invariably contain clues!

Make a map and send for the help sheet if you're totally stuck!

Previous Next
Cutthroats (4th May 2018) (Dragon 64)
A pirate-themed interactive fiction written in the famous Infocom style. Entrusted with the location of some ancient shipwrecks, decide who you'll trust to help recover the loot.