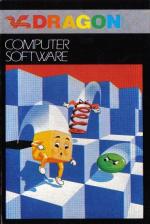 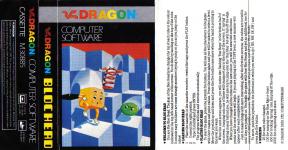 The screen is fairly attractive, though I found the figures shapes indistinct on TV... The spring was almost invisible. Read Review

Bloc Head has a very simple scenario but is a challenging game to play. Read Review

You are the Bloc Head. The goal of the Bloc Head is to change the top of each cube to the colour indicated in the top left-hand corner of the screen. You do this by landing on the top of the cube. It sounds easy but there are some strange monsters trying to jump on you as you jump on the cubes!

To start the game, press the joystick fire button. You will see all the characters in the game with their names and point values. Press the button again and you will be asked to select a level. Move the joystick up and down and press fire when the hand is pointing to the level you want.

When the next screen appears, you will notice two flashing 'Bus Stops' in the bottom half of the screen. Jumping onto one of these will transport you to the top of the screen. If 'spring' is following closely behind you, he will also try to jump onto the 'Bus Stop' but will fall off the edge.

When you have changed all the cubes to the new colour, you will be awarded some bonus points and the next wave will begin. If you are playing at the TUFF level, a new monster will appear after each completed wave.

Just to make things a bit more interesting, after the first two screens, the cubes are invisible until they are jumped on. You begin the game with four Bloc Heads and get an additional one for every 10,000 points you score. The game ends when you have lost all your Bloc Heads.

To move, push the joystick in the direction in which you wish to go (NE, NW, SE, SW) and press the fire button.

The program will load and run automatically.