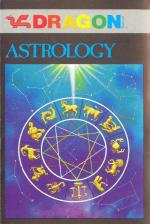 Welcome to Astrology. This program is definitely intended for the serious user. It will give you accuracy to two minutes of arc or better, allow you to choose from Tropical or Sideral zodiacs, Geocentric or Heliocentric charts and five different house systems - Placidus, Koch, Campanus, Equal and Regiomontanus. You can specify the orb for aspects, find any harmonic and output the complete natal horoscope listing to the screen or printer.

After the program is run, there will be a short delay while the program sets up. You will then be asked a series of questions concerning the person for whom the horoscope is being cast. You will be asked for the name, the month of birth, the day of the month, the year, the time and the latitude and longitude.

In some cases, you will see the format of your entry in parentheses following the question. For example, following the longitude question you will see (DDD.MM). This means that you are to input three digits for degrees and two digits for minutes with a decimal point (period) between them - like this - 081.50 -. Be sure to enter the items in the indicated format or the program will not work correctly.

Latitude and longitude can be found in an encyclopaedia or on a road map. Great Britain is west longitude and north latitude.

If you have a printer connected and want the output to go to the printer instead of the screen, answer with a Y when asked about the printer.

The first thing printed will be a summary of the birth information. This will include the day of the week that day fell on. If any of this is wrong you made a mistake in entry, so just press BREAK and RUN the program again.

Of course, the actual numbers will be different. The first three letters of the sign name are used as an abbreviation.

The next thing you will be asked is what house system you want used in calculating the house cusps. You have five choices, and Koch, Equal and Placidus are probably most popular. By the way, the first house cusp shown is also the ascendent or "rising sign".

You will next be asked for an "Orb" for the aspects. The aspects are relationships between planets that have significance. For example, if two players are 90 degrees apart, this is called a square, and is used in interpretation. The planets don't have to be exactly 90 degrees apart, as long as they are close. Exactly how close is a matter for debate, and it is this allowed variance from the exact angle that is the orb. If you don't what what to use, a value of 5, 6 or 7 will do fine. The program will search for and display six different aspects.

The next section, harmonics, is used by advanced students only. If you want - as an example - the 11th harmonic you would enter an 11 and if any planets have that aspect to each other they will show on the ensuing list as though they were a conjunction. As we said, if you are confused about harmonics, just forget them until later.

The program will allow you to do more than one house system and more than one harmonic without re-entering the birth information, and you can do several horoscopes just by entering a Y when asked if you want to do another.

The list of numbers generated by this program is the natal horoscope. The interpretation of this horoscope is another matter entirely! There have been libraries written on the subject, and any short treatment we would give it here would do more harm than good. For that reason we suggest that you get a good book on interpreting a horoscope and read it. Any bookstore should have several good titles on astrology.

The calculations performed by this program in a few minutes would take an experienced person a couple of hours to duplicate. Also, this program is as accurate as it can be made without using a mainframe computer. You will find an accuracy of 1 or 2 minutes of arc, which is usually a better overall average than produced by manual calculation, especially considering the possibility of human error.

The great accuracy of this program is made possible by the use of certain "neely values" and "planetary routines" which are copyrighted by Matrix Software.