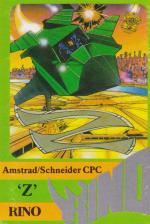 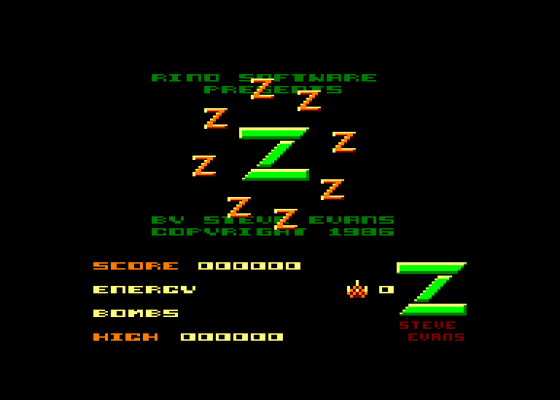 Space, the final frontier, a place that my astronomy lecturer at university assured me was a vacuum, a really empty place with not much knocking around except the odd hydrogen atom every cubic centimetre.

Well my lecturer seems to have got it all wrong. Every time I load up a computer game I find that space is actually filled to overflowing with all manner of strange lifeforms. It's so crowded out there that it qualifies for a local authority rehousing grant. Most of the aliens seem to have had unhappy love affairs, too, because they're mean and nasty sociopaths who want to kill me. So much for universal brotherhood!

Z, it says here on the packaging, is a place in the unknown where the shroud of death awaits in the land of the alien. Too right, mate. The gameplay area features a plan view on to a landscape which is being criss-crossed by all manner of lethal alien craft, such as droids (several types), meteorites, mother ships, control ships and flying saucers although the instructions call them a "saucims" and claim that they emits "missies" (Well, with a company name like Rino I guess spelling isn't one of their strong points). 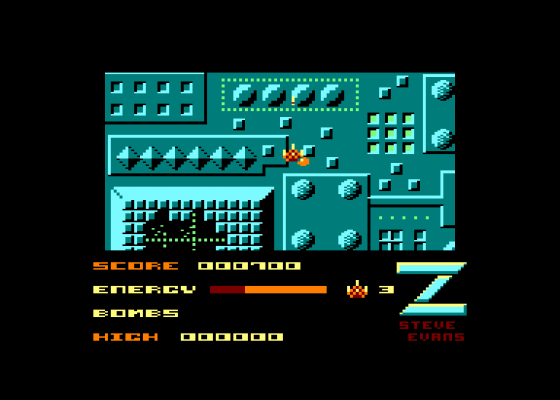 Everything except the meteorites fire back at you, and somehow your opponents all seem so much better at dodging around your laser bolts than you are at dodging theirs.

Mostly your task is to improve the neighbourhood by blasting away and reducing everything insight to a density of one hydrogen atom per cc. Enemies can also be destroyed by ramming them, but this tends to deplete your shields somewhat - run out of energy and kapow!

As an occasional diversion, energy bomb capsules drift across the screen. These can only be opened up by a well-aimed bolt from your laser. Then it's the thrill of the chase as you try to collect the energy bomb before it dissolves. 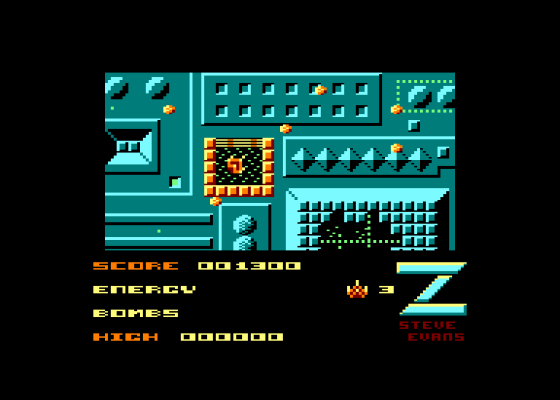 These bombs come in handy for reaching the next level in the game, as they are the only way of puncturing the force barrier blocking the entrance to the transporter unit. You need several bombs to blast a hole wide enough to pilot your ship through, and to make life harder the barrier (and any holes in it) scroll, making adjacent strikes trickier.

There are four levels, with increasing degrees of' nastiness featuring backgrounds of an alien complex, a countryside battle zone, a lunar landscape and nightflight. On this final level you need to collect five of the energy bombs, at which point the alien control ship appears (no sense of strategy, these aliens) ready to receive the five direct hits which are the only way to destroy it.

Pretty the backgrounds may be, but they are essentially cosmetic except for the transporter unit. Hit this and you bounce, but with a considerable energy drain. As your ship's energy only recharges slowly, and running out causes your ship to disintegrate, care in navigation seems to be in order. It's a tough universe out there...

This game is certain to be compared with Hewson's Uridium, but doesn't exude the same sense of style as its predecessor. The Mode 0 graphics are colourful but blocky, lacking Uridium's detail and the nice touches it had such as the ship's roll manoeuvre as you changed direction.

The play window is very small, probably to disguise how quickly the scrolling background wraps in both the vertical and horizontal directions.

And variety is conspicuous by its absence. Unlike the spacefighter, I can't see this one taking off.

This is a pretty unremarkable shoot-'em-up, but at least Rino aren't charging full whack for it. On the other hand, I'd have thought budget prices were nearer the mark for a game with a tiny screen and only four levels.

The tape doesn't seem to take long to load, so I'm sure the memory is there to beef up the graphics and the gameplay. The sound effects are rather feeble too, only beeps and bangs.

There's no tune on the title page, no high score table, no real challenge. To sum up - zzzzzzz.

Initially this is very addictive, but the fascination soon palls. The first disappointment is how small the landscape is. This place is less like a planet and more like a parking space. If they had the whole place carpeted they'd get change from a tenner.

With a small screen and tiny planet there is not much for the processor to do other than scroll. This it does very well. Four direction scrolling is not easy, so there is some programming skill here. I think I'd rather pay £9.99 for a game with more in it. 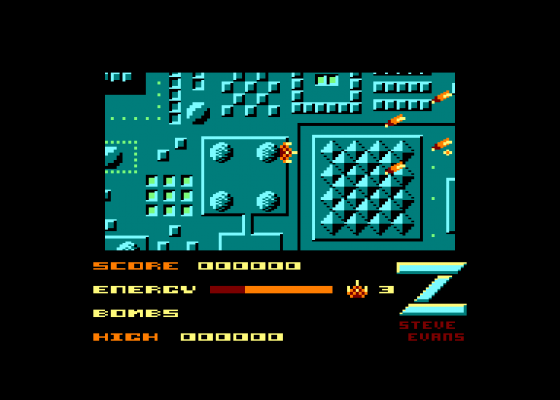