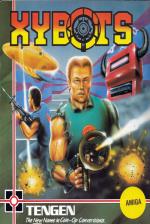 As a coin-op, Xybots was an unusual game. Unusual both in the way that the game combined strategy to a maze shoot-'em-up. Set in a space station of some description, you, and a friend if you so wish, play Major Rock Hardy (!?!) and Captain Ace Gunn (?!?!?). These two dashing heroes have to move around the space station, killing all the evil robots that patrol the levels, collecting coins and extra weapons.

The coins allow you to improve the stakes at shops between levels. Here you can buy things like more powerful shots, slower loss of energy and a higher overall energy limit.

The game is viewed from second person perspective, from a point just behind your man and looking in the direction he's facing. The ground is set out as a grid, and the view only changes when your man moves into another square in the grid. Left and right make the man move to the left or the right, side-stepping as it were. Forward and back make you run forward and backwards. To change direction, hold down the fire button and then move the joystick left or right. This rotates you through 90 degrees and comes in handy with faced with multiple direction attacks.

The 3D is very convincing. The sprite update is clean and some very clever maths have been used to ensure that the positioning of objects is 100% accurate. That way you and your partner can view different situations from entirely different locations.

Xybots is a maze game, that, on the later levels, will require a great deal of exploration. That's why two player teamwork is vital, and indeed the game works best in two player mode. Rarely has a two player split screen game worked so well, and if you have any friends and a spare hour or five, I recommend getting them over to your house to play this.

The graphics are as close to the coin-op as you could wish. As I've said, the sprite update is perfect, as is the actual sprite positioning. The darkening of the corridors as they disappear into the distance give a pretty good feeling of distance.

The sound, finally, matches up to the graphics perfectly. Bulley and explosion effects are great, and the radar works a treat. A droning sound gets louder as you approach something of value and quieter as you walk away.

I never thought much of Xybots as an arcade game. There was just too much thinking to do, and it didn't really serve its purpose at all. After all, coin-ops are supposed to be a form of instant escapism, and Xybots just wasn't instant enough. As a computer game, however, it finds its mark. Involving end challenging, Xybots is a game every Amiga owner should consider having.

Involving and challenging, Xybots is a game every Amiga owner should consider having.
Logout