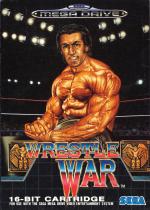 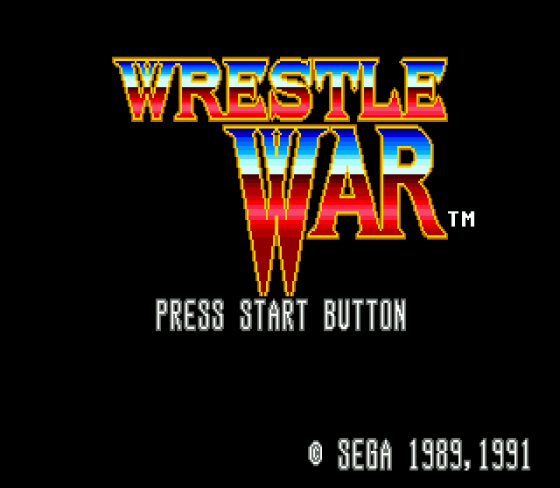 And now! Lay-dees and gentlemen! Here is your chance to become King of the Ring in this techno tussling tournament which pits you, as the handsome and heroic Bruce Blade, against eight rambunctious wrestling rednecks. Play solo and Bruce is entered into an All-American tournament, but if another player wants to join in, he can choose to fight as any of the eight opponents in a one-off battle of biceps.

Bruce begins the tournament as a relative unknown, and to get onto the circuit he first has to beat the rather unskilled Mohawk Kid. With The Kid out for the count, you can then choose Bruce's next opponent from one of five who come from all across the USA. Beat this gang of mean matmen, and you've made it to the semi-final, where Bruce faces Buckskin Rogers. In the unlikely event that Rogers is beaten, Bruce finds himself in the final with only Grang Kong, America's hardest wrestler, standing between him and the champion's belt!

Although the playing area in Wrestle War is quite small, it does scroll to follow the protagonists around the ring, and in a one-player game, the viewpoint flips over so that Bruce Blade is always at the front. This way you always get a good view of the action. 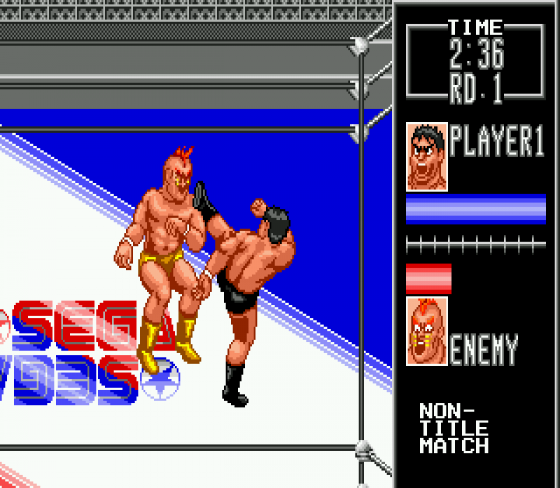 Of course, just like the real thing, the fight isn't confined to the ring! If either wrestler is thrown through the ropes, the other can follow, and continue the fight while the invisible referee counts them both out. To lend a little support, you can grab a nearby chair or other heavy object and start beating your opponent over the head with it!

1. The Mohawk Kid The first fighter Bruce has to beat. He starts with only half Bruce's energy and is easily trashed.

2. Mr. J A hockey-mashed Minneapolis mauler who would be happy to spend hours applying the sole of his boot to Bruce's face. 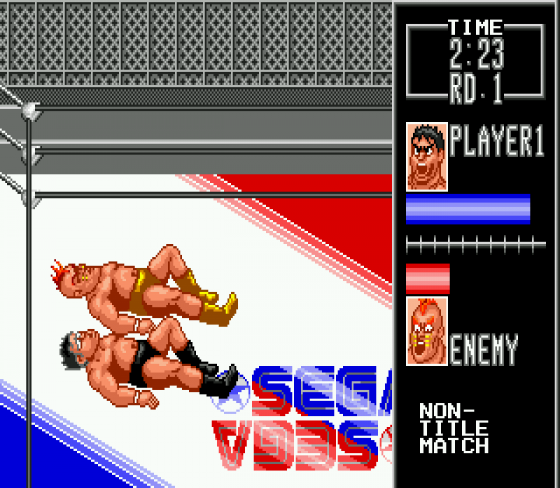 3. Sledge Hammer The scourge of the San Francisco rings, this guy will try to mash your head with a knee-drop if he can get you on the mat.

4. Dan Dambuster When you live in New York, you have to be tough, and Dan, Dan, the butt-kicking man is certainly no exception!

5. Nimrod Falcon This Miami masked marvel's only vice is that he just loves to put half-baked wrestlers on the floor. 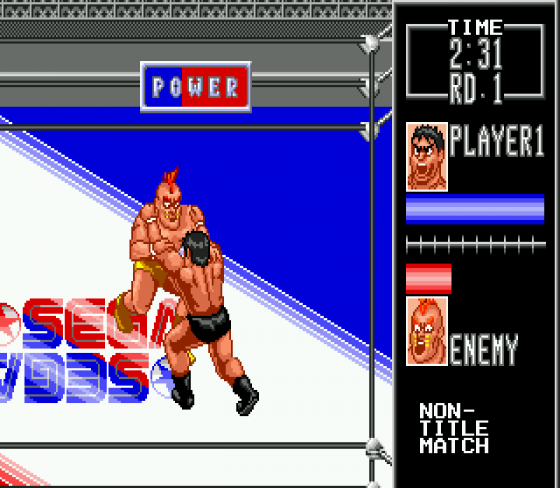 6. Titan Morgan A blond Texan hard man from Dallas. He's another one who likes to leap on your face when you're on the deck.

7. Buckskin Rogers The second-toughest wrestler in America, and he's not ashamed to let it show. Beat him and you're in the final against...

8. Grand Kong Aptly-named, this gorilla is the American champion and he's not about to let some two-bit tussler in cheap black shorts take his belt. 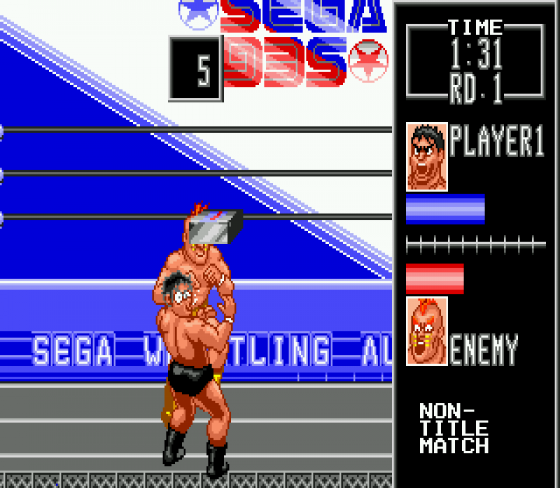 The control buttons are defined as punch, kick and hold. The first two are straightforward enough, but the third locks the wrestlers in a clinch. As soon as this happens, you quickly choose the move to use next, hold down the corresponding direction, and start hammering away at either the B button (for a slam) or the A and C buttons for a rope throw.

In a two-player game, whoever presses fastest gains the advantage and sends his opponent flying across the ring.

After a rope throw, you must prepare for the opponent's rebound, and press one of the three buttons to perform either a Lariat (stick out your arm and catch his neck), a drop kick, or a shoulder throw (bend down and throw him over your shoulder). 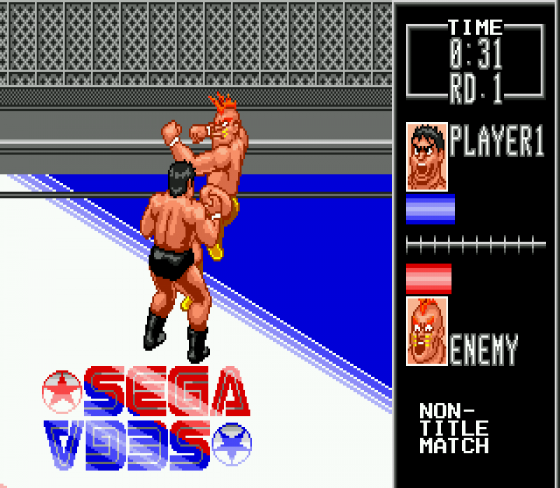 Similarly, if your opponent is on the floor, the three buttons provide three options - help him up (by the throat), stomp on his body (some characters can also do a knee drop to the head) or him to the floor. Keep him down for a count of three and you've won the match.

Wrestling is a silly sport, so it's good that this is a silly game. Not as silly as Ringside Angel, admittedly, but lots of laughs nonetheless. The challenge is easy enough at first but soon gets tricky (unlike Ka.ge.ki where you can win every game with one move).

The wrestler sprites are chunky with superb animation and the only graphical annoyance is the screen switch that happens when they move around the ring. Like Paul, I think you'll get lots of enjoyment out of this, so buy, buy, buy! 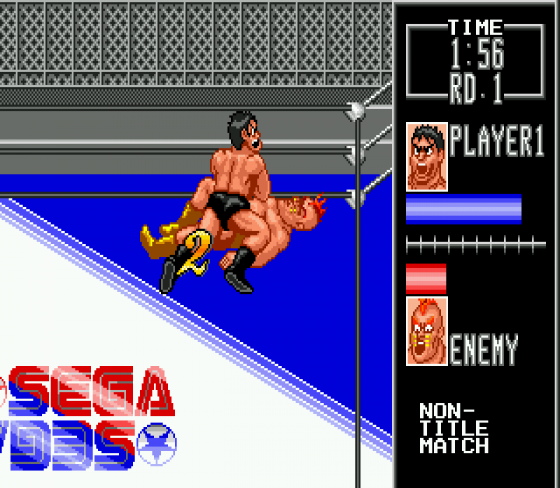 I've taken quite a lot of 'phone calls asking about Megadrive wrestling games over the last few months, but I reckon I can relax a bit now, because although this isn't actually a WWF game it should be good enough to keep most wrestling fans happy!

The fighter graphics are really great - certainly the best I've seen on any wrestling game outside of an arcade - and the animation is spectacularly dynamic. There is quite a bit of skill involved in the gameplay, and though the control system will more than likely break either your wrist or your joypad, it add adds to the frantic fun. 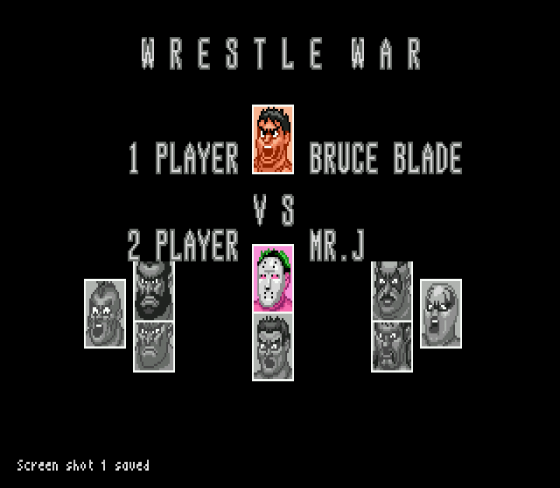 Graphics 90%
The playing area isn't given much screen space, but the graphics for the fighters and all their moves are spectacular!

Playability 87%
The control system is quite easy to get to grips with, and after that the game is great fun for one or two players.

Lastability 85%
Long-lasting fun in two player mode, and the tournament should take some winning too!

Overall 88%
One of the few really good computer wrestling games. A must for lovers of the sport.

One of the few really good computer wrestling games. A must for lovers of the sport. 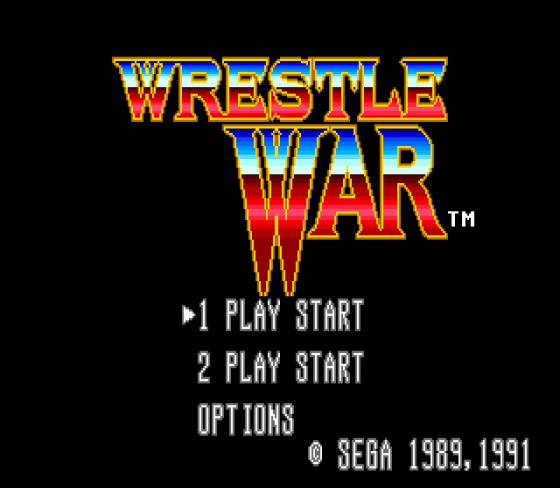 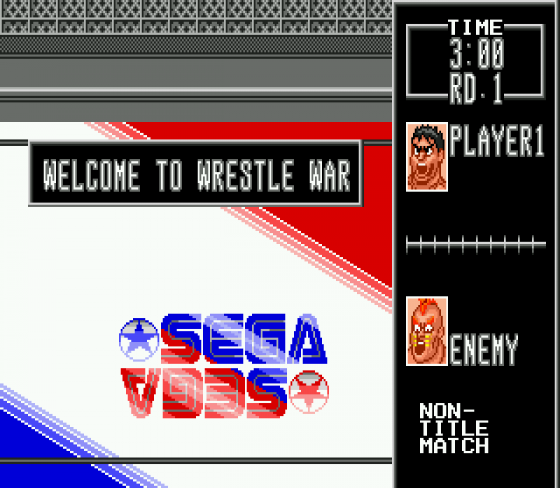