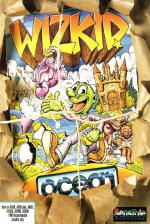 It's official - Sensible's latest is deeply dippy enough to turn even the most professional of game reviewers into a space cadet. Imagine, then, what it could do to Mark Ramshaw... 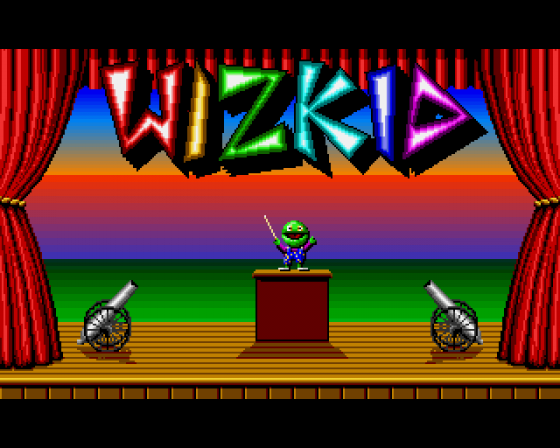 Hello, good evening and welcome. Today, we'll be charting the progress of young Wizkid, as he undertakes perhaps the biggest challenge of his life. Mark Ramshaw, our man on the spot, takes up the story:

(Ahem.) Hello, this is Mark Ramshaw at Wizworld Boot Camp - current abode of Wizkid, son of famous guy-on-the-rebound and international playboy, Mr Wiz Ball. With me here is drill sergeant BD Snail. Can you tell me Mr Snail, just why has Wizkid enrolled in Boot Camp? Isn't he still a little too young? 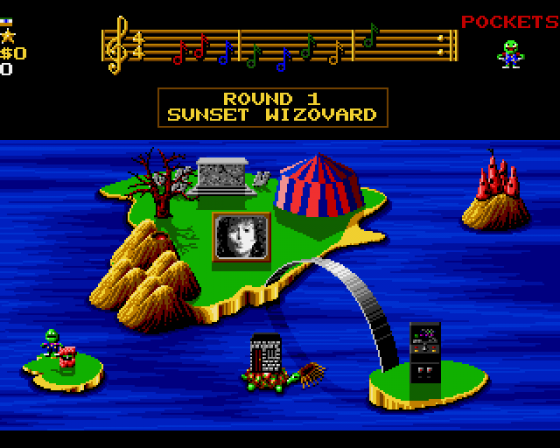 BD Snail: To train himself for a special mission, sir! Yes, he is younger than our normal recruits, sir! But he's got a lot of ability for his age, sir!

Mark: And can you tell me about this special mission?

BD Snail: I think you better ask young Wiz about that, sir! Classified information and all that, sir! Ah, here comes the young recruit now, sir! 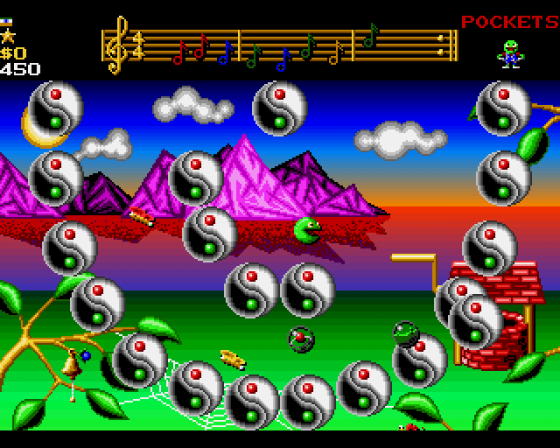 Wizkid: My parents - that's Wizball and the wizard of course [! - Ed] - have been kidnapped (whimper). It was the nasty mouse Zark that did it. He's really bogus, and I'm going to make myself big, clever and strong (just like my dad) and go smash his face in.

Mark: And can you tell our readers just what your Boot Camp training involves? 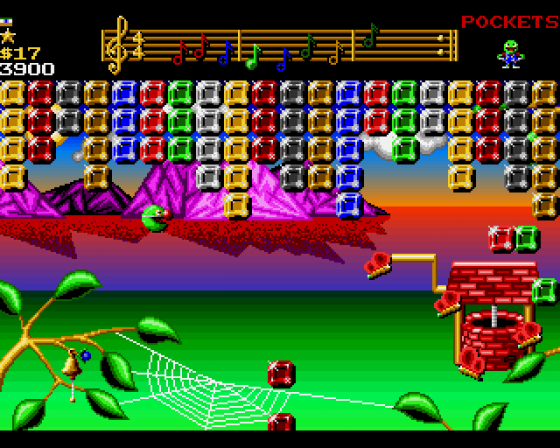 Wizkid: Well, I'm learning to smash these bricks, which is really fab. And when baddies are near, I can knock the bricks onto their dumb heads (tee-hee). And if I get my special red nose I can bounce the bricks on my head, so I can use the same ones again and again. Or even better, I can get some teeth (giggle) and then catch and carry the bricks. Thunderchoppers (that's what we call them) are really skll, 'cos then I can really aim the bricks at the bad guys, y'know?

Mark: Right Wiz, here you are on Sunset Wizovard. What's your plan?

Wiz: It's a really sound plan, that's what it is. Y'see, there are like nine areas which I've got to fight through, using all my really ace moves 'n stuff. So I reckon if I beat them bad guys and collect the note bubbles which they drop (nah, I don't know why they do that either), then I can make a tune and collect some extra pocket money. 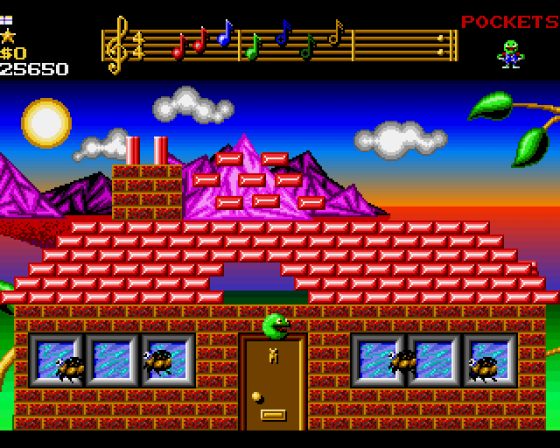 Wiz: Yeah, then I can buy some fab gear to go exploring, and find the cats (they're pals of Nifta, who's a really fab 'n ace friend of mine). 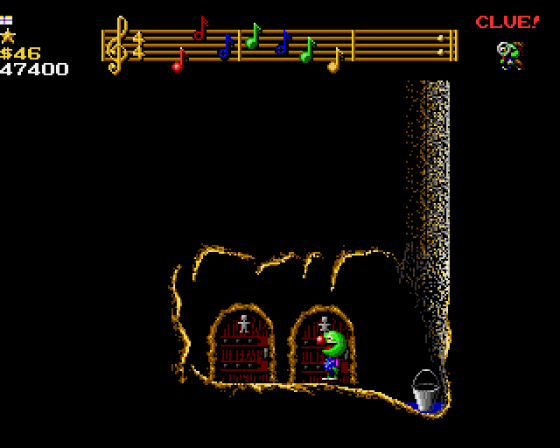 Wiz: Don't you oldies know anything? There's a cat in each area, and so if I can find all those, then they can help me when I need to cross the sea to get to Zark's castle - that's where he's got my father locked away (sob). Them cats row like nobody's business, y'know what I mean? 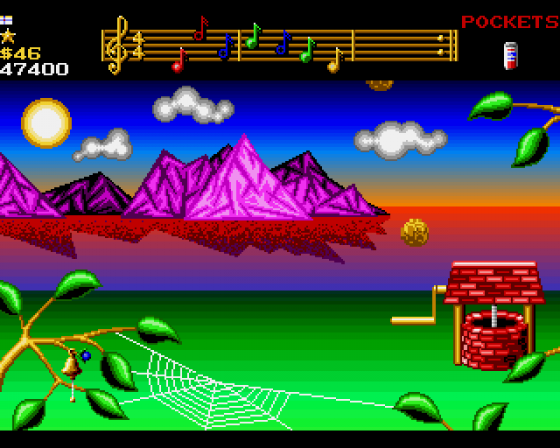 Mark: And off he goes, as the sun dips down over the mountainous horizon on Sunset Wizovard - ducking, diving, weaving and performing headers even old Joe Jordan would be proud of. For such a young player, our Wiz is a remarkably skillful little mover. He's not half as green as you'd expect. (Except he is, if you see what I mean!) Watch as he roundly whips those evil (?) butterflies with those huge yin-yang (??) symbols. What a pro. And in no time at all, he's collected enough cash to pop to the shop and buy himself a cute little pair of legs and a newspaper. So, what now Wiz? 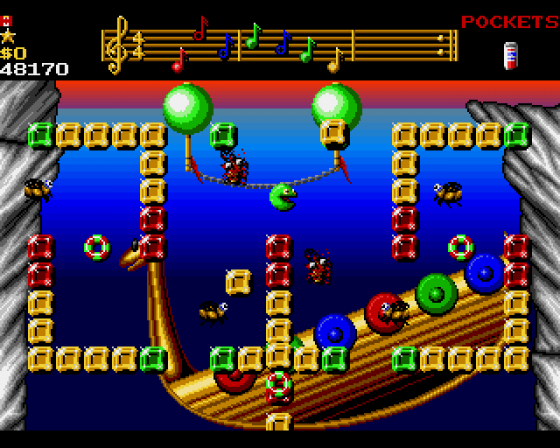 Wiz: No, I'm mean. I'm going to go down the well. It'll be well sound, just you wait and see. I'll winch the bucket up like so, and climb in, then down I go. Catch you later, dude.

Mark: Good luck, Wiz. And there he goes. I'll wager there's male and female toilets down there (Don't ask me why, it's just a vibe thing). Now, if he can somehow clear the blockage in the volcanoes, and collect any objects lying around. I think he'll be ready to move on.

While he does that, though, let's take time out here to marvel at the beauty of this place. It may be menacing, but it sure looks nice. And the acoustics are just perfect for that rousing music we can hear wafting across the Wizoward. And what's this? Here's Wiz clambering out of the well, even as we speak. In his hands we can definitely see a can of coke, which I'm sure will come in handy at some point, and it looks like he's heading over to ring that bell. What next, Wiz? 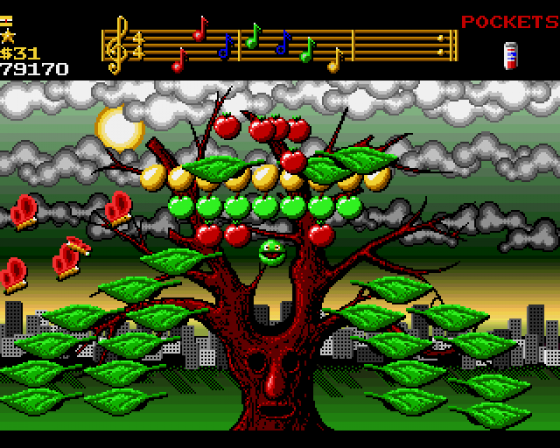 Wiz: Wow! Who would have expected a toilet shed to drop from the skies? Like (giggle) banging, man!

Mark: Hey Wiz, why not open that shed door? 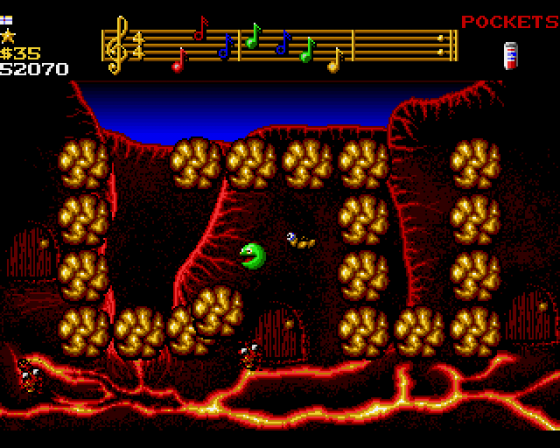 Wiz: I know, why don't I open that shed door? 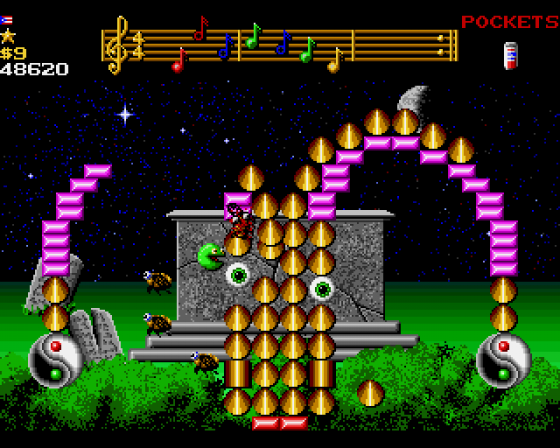 Wiz: Yeah, fab idea. If I put the newspaper through this letter box, and try opening the door again. Yuck! The dog is on the toilet, and he's reading the newspaper. Gross. Still, it might mean I'll be able to sneak past the ravenous beastie now. Let's try again, shall we?

Mark: And there he goes, where he'll appear nobody knows. I'm off to the next island in Wizland. Join me, and Wizkid (if he makes it) after the news... 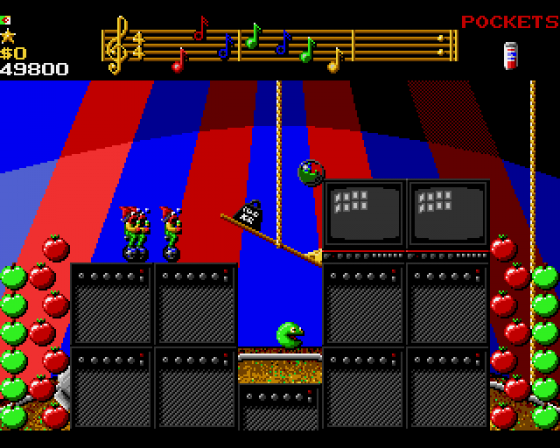 Mark: So here we are at the Jail House. Wiz island. Tell me, Wizkid, just how tough has it been so far?

Wiz: It's been well 'ard, mister. I've been underwater, in volcanoes. I've been flying. I've been killed and re-incarnated. I've even been in space, fighting waves of nasties. I had a laser gun an' everything - it was wicked, y'know? And I learned so much. Like, it really pays to save up and buy everything possible, 'cos you never know when you'll need it. I've found that unless you wipe out all the baddies and collect the money, it takes ages to make any progress. And it pays to explore, y'know what I mean?

Mark: Quite. So what next? The battle isn't over - you still face terrible odds. 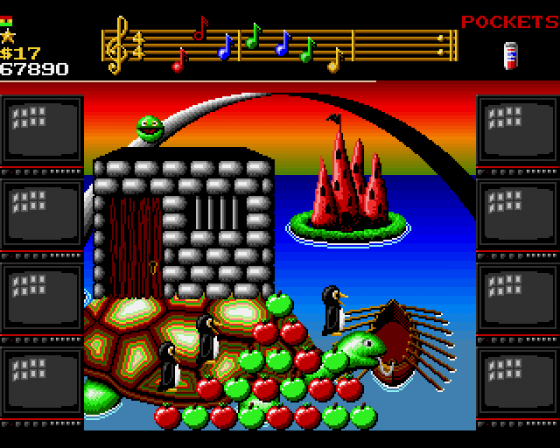 Wiz: I know, mister. But I've been getting all the cats, so when I get the boat over to Zark's island, they can help me row. Sometimes I think I'll need their help, 'cos sometimes (sniff!) I think I'll never rescue my parents.

Mark: I see. Well Wiz, it just remains for me to wish you good luck. I think we've taken enough photos for our feature. Thanks for letting us follow you on your daring mission. Take care now. 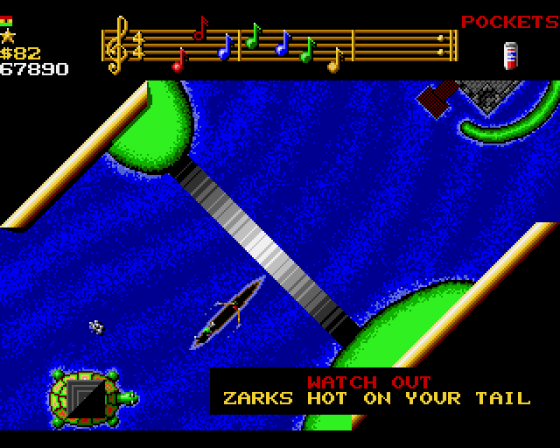 Wiz: This is for a photo feature in the next issue of Amiga Power, yeah?

Wiz: Can you send me a copy? It's my favourite. 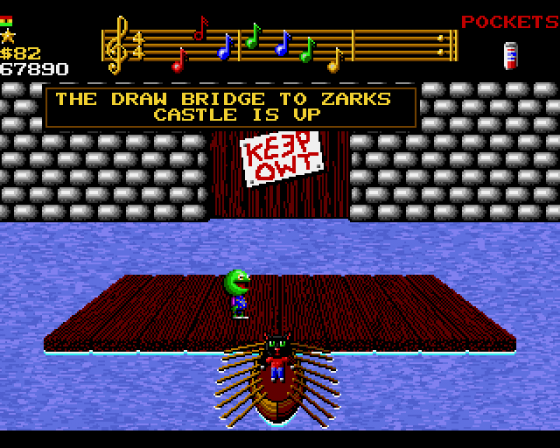 [One more review like that, Ramshaw, and either I go or you go - Ed]

Uppers: Wizkid's real genius lies in how all sorts of game styles are blended seamlessly into one another to make a crazy, yet cohesive, whole, where you never know what's going to happen next. It's got a wonderfully thought out learning curve too - one of the best we've ever seen, with an excellent training section at the beginning. Technically spot on, with wild graphics, excellent and varied sound, and an evil sence of humour, Wizkid really is as close as we're going to get to the first Amiga-based mind-altering substance.

Downers: Working out where the smallish Wizkid is on the screen (particularly at the start!) is sometimes a bit tough. Our only real gripe, though, is that it's possible to play right through the levels, only to be told that not enough kittens were collected to progress to the last section. It's "Game Over" at this point and you have to start again - how very annoying!

Playing Wizkid can result in a scrambling of your brain nodes. I'm currently trying on straitjackets and weaving baskets [And utterly incapable of writing a comprehensive review - Ed], so deeply has its bizarre, surreal sense of humour affected me.

Wizkid is a psychedelic mix of arcade adventure, football, bad jokes, and arcade games like Breakout and Pengo - but with a perfect control system. The most refreshing thing in years, and so individual it's as much fun to play as it obviously was to write.

If you don't buy Wizkid, your life really will be a lot poorer.

The most refreshing thing in years, and so individual it's as much fun to play as it obviously was to write. 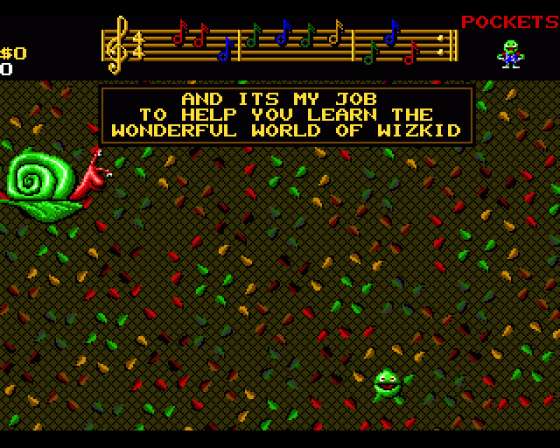