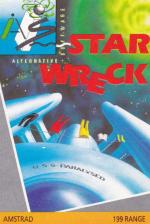 Alternative Software is a new software house to me and having found a couple of their £1.99 gems in my local computer shop I thought you may like to hear about them.

Wizbiz and Starwreck are both written by Charles Sharp and I am reliably informed that Charles is normally quite sane. Mind you, he must have been up in the middle of the night at the elderberry wine when he wrote these two, as they are as zany as any adventure games I have played.

Wizbiz is the slightly saner of the two and has you playing the part of a wizard called Ralph. Last night you spent a few happy hours down at the local with some wizard pals. Sadly you had one lager too many and practiced one of your party tricks on one of them. Mike did not take kindly to being changed into a pink and black spotted salamander! When he recovered, you were even the worse for wear and it is not surprising that you remember little of the way in which he transported you to one of his less pleasant dungeons to cool off.

Of course you must get out - who knows what is going on at your pad without you there to keep an eye on things? There is no way you are going to manage this on your own, you had better call on your familiar for help. With that hangover you can barely remember your own name let alone his.

Perhaps a hair of the dog may help, that usually loosens your tongue. It may loosen your memory too. Once you have his help things can start to happen. Of course they may not all be in your favour, but at least it beats rotting in a dungeon.

Wizbiz is written using Incentive's Graphic Adventure Creator, so the general format of graphics and parser are good without being exceptional. The text is generally short and to the point, keeping the atmosphere alive until the end. There are lots of objects to find - of which a fair number are red herrings. Unlike some programs where these ruby coloured fish have no purpose, these often appear to be doing something, but are in reality just driving you further up a gum tree.

Make maps carefully as there are several pseudo mazes where you could easily get a little confused. At first the puzzles are not so much difficult to solve as hard to find. Examine everything you come across, no matter how mundane the object may appear to be. I found that at first I was ignoring some items because they seemed such simple and everyday objects. Examining them not only gives you more information about the object but also provides clues to potential puzzles.

Although I don't think that you can get killed in this program, it is still a good idea to save the game position fairly often. Not only does this enable you to return to critical locations more easily to try out your latest ideas, but some actions may prove to be more of a hindrance than a help and you may wish you had never tried them.

Wizbiz may not appeal to everyone, you do have to be more than a little crazy to enjoy it fully. If you have even the slightest hint of madness in your family, buy the game you will enjoy it.

Where no one else dare go Starwreck, the second budget title from Alternative Software, is really the story of a disaster looking for somewhere to happen. It is about the happenings aboard the starship Paralysed, of which you, James T Cake are the captain. Your mission would appear to be a simple transport job. You have aboard the Thracian Ambassador and a couple of strange creatures that have to be delivered to a research station.

There is also a Krall, a potentially deadly being who lives off other organism's life forces.

Having wandered around the Paralysed for some hours, I am still not too sure what I am trying to attain. I think the whole idea is to encourage the total disaster of the voyage. Constructive actions do not seem to have much effect but destructive actions lead to yet more chaos and general mayhem.

There are a number of objects to find and puzzles to solve, but nowhere near the variety found in Wizbiz. The atmosphere is more aseptic than charged, which I suppose is in keeping with a starship, but I found this more conducive to frustration than excitement.

All your favourite characters are aboard, Mr Spark, Dr Leonard Decoy, Mr Zulu, Mr Checkout and the delectable Lieutenant Yahoo, plus the presumably disposable Ensigns Weevil and Guzunder. A communicator and phaser are at your disposal and a transporter system just begs to be energised.

Again, as with Wizbiz a certain madness will be needed to get the most from this game. I am all in favour of something out of the ordinary and a few more games like these can only help to lighten those darker moments when the Stock Exchange is failing or the papers can find nothing better to tell us for days on end except Irangate or another secrets expose.

Just to encourage you (and also to get a few clues myself!), I have some software waiting for the first correct solution to either of these two zany adventures. Write in to Bill Brock at Amstrad Computer User with your final solution and the first one will have a pressie in the post - good luck.

A certain madness will be needed to get the most from this game.