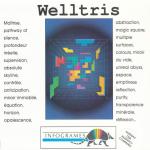 Alexey Pajilnov has got a lot to answer for you know. Having brought us all to our knees with the brain-numbing exercise of Tetris, he's now gone one step further and thrown us all clown a well without a rope to climb out with. Well, play a few rounds of Welltris and that's how you'll feel.

If you have already mastered Tetris, then the ground rules of its successor will be all too clear to you. If you haven't, then I suggest a lot of practice is in order.

First of all, though, you'll have to leaf through the manual to get through the protection sequence by correctly inputting data about Russian Republics. Right, now on with the fiendish game itself.

The idea, of course, is to manipulate playing blocks down the sides of the well into which you are peering, so that they fit alongside other pieces at the bottom. Form a vertical or horizontal line and it disappears, giving you room to do more of the same.

Another firm suggestion would be to stick to the lowest speed possible until you have built up a bit of confidence.

You can also cheat a little by pressing NEXT, which allows you a sneak preview of the next piece you have to fit into your schemes, although it does subtract from your score.

Play around with the blocks for a while until you get used to the simple-seeming movements. Remember, as long as the block is still on the wall, you can move it wherever you want. Once it touches the floor, you're stuck with that shape.

If you're not careful, a segment of the block will be left protruding up the wall... and what happens then? It freezes you out. The wall is then out of bounds for three turns, making things decidedly difficult.

The more walls you block, the more impossible it becomes to make even your best strategies work out and, if the blocks build up too high, or you manage to block all four walls, the game is over.

Bascially, make sure you've got your thinking noddle on before even thinking about giving Welltris a spin. It can be over all too quickly for the unprepared but, take it easy, think about where each block will stop along the bottom and prepare moves in advance, and you could well see things beginning to shape up nicely.

Build wisely and you should be able to remove many lines at once and, if you always prepare for the larger pieces, you should find the smaller ones falling nicely into place between them.

Lesson over, now it's up to you. Welltris is superbly presented, with some excellent decorative backdrops and easy-to-understand menu beside the playing arena.

They won't, thankfully, disrupt your concentration and you can toggle off the sound for optimum effects.

If you like the attraction of an ongoing strategy to blow your mind, Welltris should fill the void left after Tetris very nicely indeed.

Superbly presented, with some excellent decorative backdrops and easy-to-understand menu beside the playing arena.