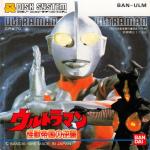 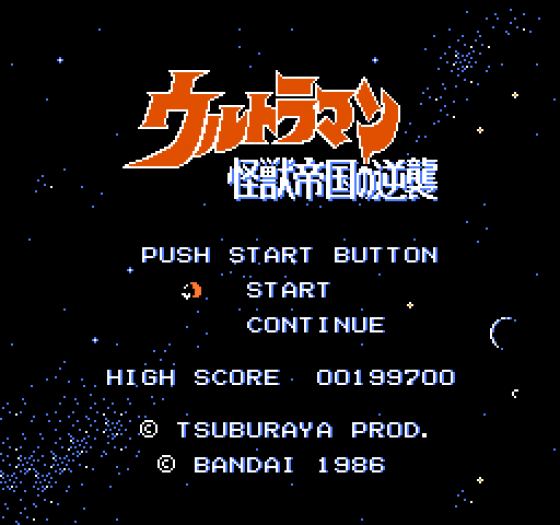 Ultraman is pretty famous in Japan. He's been the star of several motion pictures in the Far East and the plot of each is remarkably similar. Usually, a massive ten-storey high reptilian/robot is causing a bit of aggro to some poor defenceless normal-sized humans. Thankfully, Ultraman's around and he uses his various Ultra-powers to beat the living daylights out of these vindictive creatures.

These wafer-thin plots and the ooh-ahh kung-fu action have been captured perfectly in this Super Famicom cart. The action is displayed in horizontally-scrolling side-on-o-vision, with Ultraman strutting the parallax landscape dishing out Ultra-violence to the massive foes.

Ultraman has four Ultra-powers that come in handy for wearing down the enemies' energy bars. When it comes to finally disapatching them, the mysterious fourth-power (mounted in Ultra-Man's metallic shirt-sleeves) is used to blast them into oblivion. 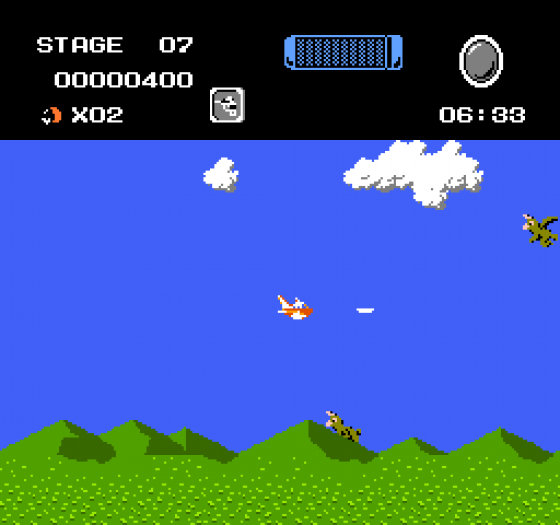 But there are ten evil monstrosities awaiting our metallic hero.

With the aid of the controller's green button, and Ultraman's capacious laser-spitting cuffs, the monstrous aliens eat various forms of laser-death in this game. However, these weapons require energy, and the energy bar builds up quite slowly during the game. It's also worth remembering that you're going to need full Ultra-power to finish off the baddie at the end of the level.

I'm a big fan of those utterly dire Japanese monster films, and am pleased to see that Ultraman captures all their cheesy crappiness.

The sprites are superbly animated, and all the monsters look as though they're made out of rubber - just like the "real" things! The music and effects are perfect for this type of game, with tunes that sound like they're right out of a crappy 60's movie and hopeless sampled monster noises!

However, while the visuals and sonics are great, the gameplay is rather limited. It's very challenging, I'll admit, but Ultraman can't do many fighting moves and therefore some might find the game becomes dull fairly quickly.

A two-player mode would have helped prolong its lasting appeal. If you're an ardent beat-'em-up fan, Ultraman is worth looking at - while it certainly doesn't make any sort of use of the Super Famicom's fantastic hardware, it nevertheless provides plenty of laughs and challenge for anyone who wants to kick the bottoms of massive rubber monsters!

Ultraman is quite an entertaining game, but for all the wrong reasons! The graphics, gameplay and sounds are all laughably inadequate for a Super Famicom game, and yet the action is strangely compelling.

The graphics are accomplished and very well-aniamted, and the sound matches the tacky atmosphere, but I get the feeling that more could have been made of the licence.

The simple beat-'em-up action is entertaining, but when you're shelling out over forty quid for a game, a bit more is needed to warrant purchase. Avid beat-'em-up fans may get their money's worth, but I'm going to be sticking with Final Fight for my beat-'em-up requirements.

Presentation 77%
Very tacky on the whole - just like the TV series!

Sound 79%
Laughable sound, but it makes the atmosphere that bit more tacky!

Playability 79%
Easy to get into and quite addictive...

Lastability 66%
...but there are only ten foes and the basic gameplay doesn't vary much from one to the other.

Overall 77%
A thoroughly enjoyable and quite hilarious beat-'em-up that doesn't have quite enough variety to be worth its large asking price.

A thoroughly enjoyable and quite hilarious beat-'em-up. 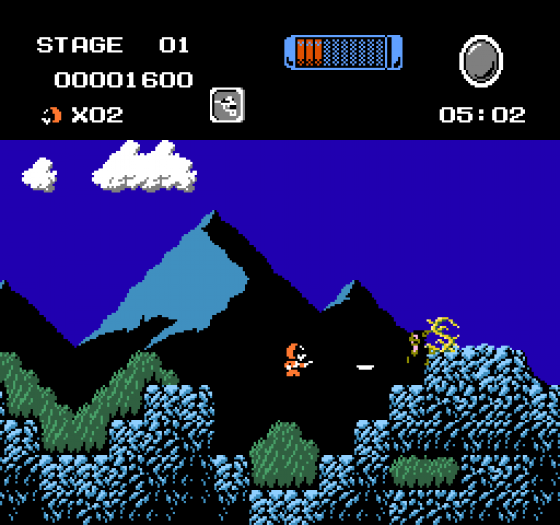