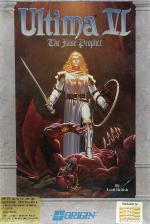 Ultima VI | Did The Earth Move For You? | Using The Soldiering Iron | Around The World In A Day | The Bottom Line

What a whopper! The latest episode in the Ultima saga finally hits the Amiga. 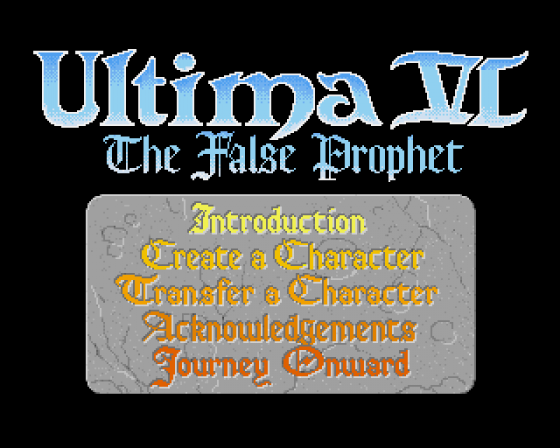 Right, that just leaves the role playing fans, and the open-minded non-fans who're willing to give this a chance. To be honest, non-role playing experts may find that this isn't the ideal starting point - Eye Of The Beholder or similar may be more up their street - but for you fans of the genre a real treat is in store. This game will teach you the real meaning of role-playing, RPG-aphones have been warned.

Sequels are funny things. For a start they've got to avoid alienating the audience which the series has already built up, but they've also got to sidestep any accusations of 'seen it all before'. It's a neat trick if you can do it, and happily the Ultima series hasn't put a foot wrong yet. Always getting bigger, gaining greater depth, adding smarter presentation and better plotting, the games have grown with the technology. Inevitably, there's always been a bit of drag - the games' visual side never quite making the grade (betraying the fact that conversions from the original PC versions usually takes around two years) - but that aside, they have been consistently the slickest, most interesting RPGs around. And so we've now got Ultima VI, proving that the more things change, the more they stay the same. 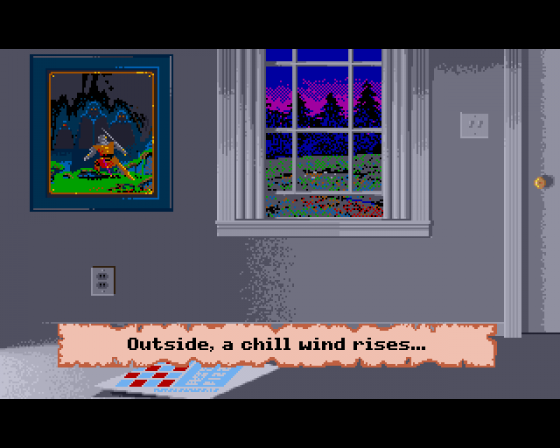 For the uninitiated (please bear with me, cynics of the world), the Ultima saga places the player in the guise of the Avatar (the human embodiment of all life's virtues) - a man (or woman) transported to the lands of Britannia (via a moongate - more about them later) in times of trouble. The adventures have always been triky, but this sixth journey to the alternate world is fraught with extreme danger. Walking into a red moorgate during a particularly vicious storm (a bad sign - the moongate is usually blue), the player re-appears on the other side surrounded by gargoyles. Rescued at the last moment by old friends from Britannia (Iolo, Shamino and Dupre), the quartet make their way through another moongate to re-appear in the court of Lord British - ruler of Britannia.

It transpires that the underworld of Britannia has been cracked open, releasing the gargoyles, whose mission seems to be inexorably linked with the player's role as Avatar. And so the mystery begins. Many lands must be travelled, towns visited, dungeons explored, and seas crossed before the Avatar can discover the key to the mystery and put an end to the threat of the malevolent gargoyles.

What this boils down to is the player controlling his main character plus up to seven others (the aforementioned Iolo, Dupre and Shamino, plus any other recruits picked up along the way) in a plan-view quest through a huge (and boy, am I talking big here) world. Everything in the world is structured pretty much as you'd expect: water flows into seas, cave entrances are hidden in mountainsides, roads connect the towns, villages and cities. Inhabitants walk around, go to work (there are inns, fletches, museums, armouries, the list goes on) and can be communicated with. 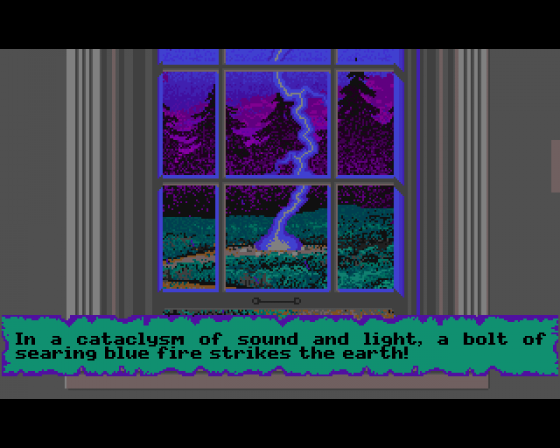 The conversation system isn't going to win any awards for contribution to the development of artificial intelligence, but compared to pretty much every other role-playing game on the market, it's a masterpiece. All characters will respond to basic questions about name and job, and some will be willing to explain a lot more - try probing them further about key words which crop up in their conversation (which, with the help mode on, are highlighted).

In addition to all this keyboard jiggery-pokery, control is also achieved with the help of a whole range of icons to be manhandled with the mouse. (It is possible to use the keyboard to access these if you wish, but this is the '90s, y'know?). In fact, the whole user-interface of Ultima VI is about as slick as you could wish for. To examine an object, simply click on the 'look' icon, then click on the object. Similarly, unlocking and opening a door takes but four clicks of the mouse button - there's no mucking about with full sentence input here.

The actual play here is limited to about half the screen, with icons and your text input area taking up the rest of the space. A line-of-sight system is used, which means that anything behind a wall or other barrier is blacked out - this isn't particularly pretty, but works to neat effect in gameplay terms. It makes the risk of going around a corner just that bit more exciting - you never know what'll be waiting in the shadows to beat your characters to a pulp. 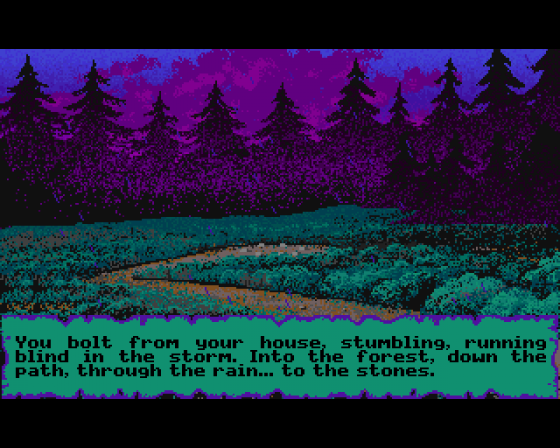 Which brings me neatly to the combat system. Anyone who's familiar with the 'chess-with-spells' combat system found in games such as Chaos and Laser Squad will feel right at home with Ultima, this latest of which uses a combat system which hasn't really changed since the very first Ultimas, a testament to its perfect simplicity.

All characters and monsters take turns to either move, use short and long range weapons, or cast spells. The characters in the player's team (other than the Avatar) can either be controlled manually, or set onto remote - where they react according to a pre-programmed general order (such as bersek, flank, retreat, etc). These orders can be changed mid-battle - and having the computer help out certainly makes things easier - but personally I prefer having total control over my team. Remember though, you're going to have to control the Avatar yourself whatever you do, and this might prove, for beginners at least, to be quite enough to be getting on with, thank you very much.

As your team wins more battles they gain experience and, in time-honoured RPG fashion, become an altogether more together bunch of dudes. Victory brings more victory, but don't get complacent - the monsters encountered soon adjust accordingly, and the player is faced with some pretty powerful new foes. Thankfully the stakes are higher, and defeat of bigger and meaner monsters usually yields better treasures - more gold, magic weapons and armour, the usual sort of stuff. 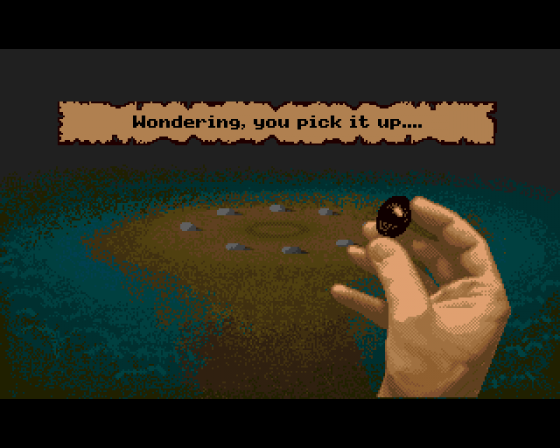 As I said earlier, the world of Britannia is frighteningly detailed. There's an awful lot to see and do, and a seemingly infinite number of little places to explore. As you make your way around it's advisable to talk to just about everyone. Information gleaned from computer characters is the way to progress in Ultima VI. One clue tends to lead to another, but just in case one problem seems too complex, there'll always be several other missions on the boil that you can go away and concentrate on for a time instead. Getting hold of a skiff or full-blown ship means that even more mysterious lands open up to the player. Thankfully a map of the world is provided with the game - it shows the location of quite a few towns, cities and islands, but it's by no means definitive, which is neat. It makes the discovery of each new place that bit more satisfying.

Of course, there's an easier way of getting round Britannia - via the moongates. Essentially, these things are teleports which appear and disappear intermittently in specific locations. Simply walk into one gate, and you'll come out of one of the others. The presence of each doorway is governed (as the name suggests) by the cycle of Britannia's twin moons. Learning mastery of the moongates early in the game is definitely a good idea, unless re-treading the same old roads again and again appeals to you.

And that's by no means all. There's still much to the game I haven't mentioned - the shrines, the mantras, the plots within plots, the gargoyle islands; the list of oddities, subtleties and surprises just goes on. Oh yes, there's the pretty neat spell system too - another finely tuned aspect of the gameplay. 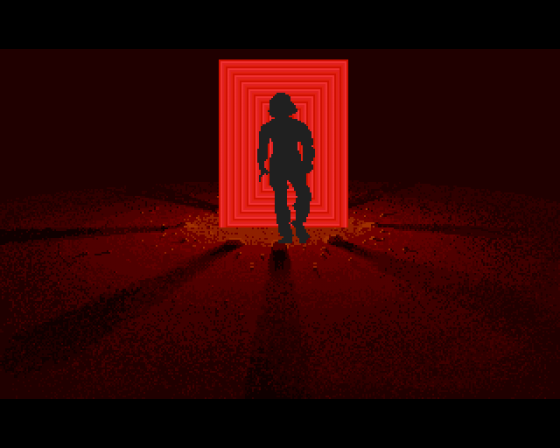 But enough, it's about time I got down to the nitty gritty and let you know just how good Ultima VI really is.

Well, it's a bit obvious, isn't it? I wouldn't have been wittering on for this long if I wasn't pretty damn enthusiastic about the whole thing. The basic game, then, is great - what problems there are come from specific flaws in this slightly disappointing Amiga conversion. The speed is probably the main problem. Moving around the world of Britannia just feels too cumbersome. Faster scrolling would have been wonderful. Graphically, we're obviously in hardened role-playing territory - there are no fancy 3D routines here and no need for them, and anyway, plan-views never allow too much scope for gorgeous visuals. The music rises to the occasion well enough, with several not-unpleasant (and context-sensitive) tunes - all very baroque.

And that's pretty much it, really. Apart from the niggles abour speed (oh, and the fact that playing it from floppies is a complete non-starter - there's an unbelievable amount of disk-swapping necessary) there's not really anything to complain about. Like I said earlier, I can't see many people buying this as their first role-playing feast, but for those who know what they like, this is just perfect. It's certainly the best Ultima game yet, and as such I reckon it's also the best Amiga role-playing game available. And don't forget with a game of this type and epic scale, you're offered far more potential hours of game time for your pound than you'll find just about anywhere else. What more could you ask for?

Uppers: With more depth than any other Amiga game around, Ultima VI offers an entire world of places, people, spells, treasures and battles. A role player's dream, with the best in exploration, combat, and character interaction crammed into one neat package. It's not without humour or mindless violence either.

Downers: Although a vast improvement on the earlier Ultima games, the graphics are still fairly rudimentary. Speed is also a problem - it takes too long to move around. And you're going to need a one meg hard drive machine too (Don't even try playing from floppies!).

Still a hardcore role-playing game, Ultima VI is nevertheless as good as the genre gets. It offers an incredible amount of playing time, a better-than-average plot, and well-structured gameplay and gameworld. Months of fun - if you ever liked any role-playing game, you'd be well advised to shell out for this one.

Ultima VI | Did The Earth Move For You? | Using The Soldiering Iron | Around The World In A Day | The Bottom Line

As good as the genre gets... If you ever liked any role-playing game, you'd be well advised to shell out for this one. 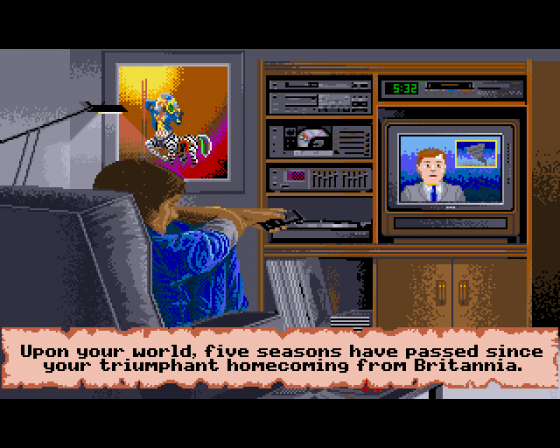 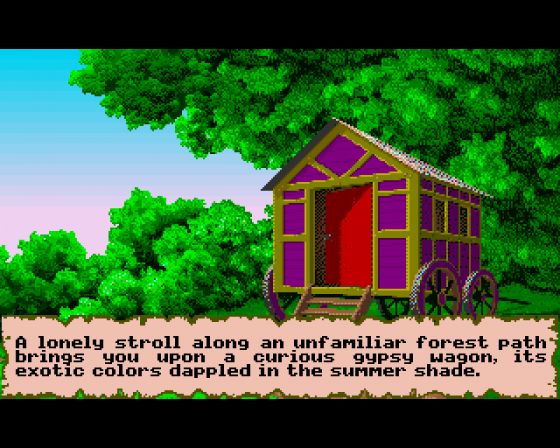 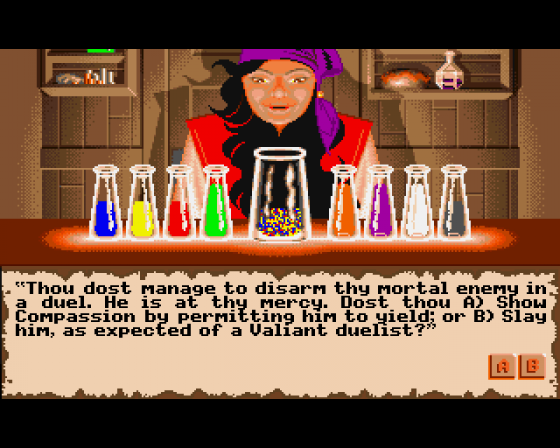 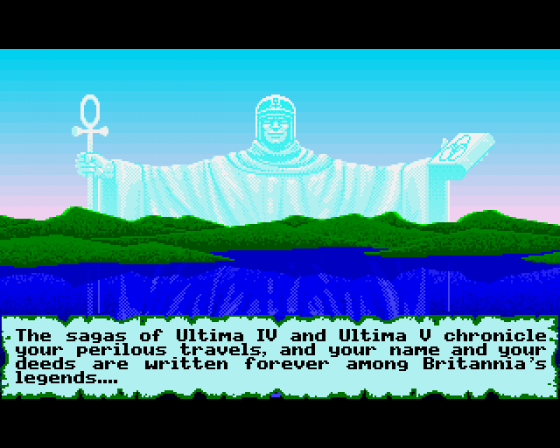