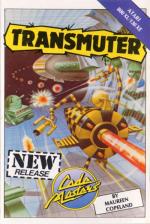 In the past Codemasters has only released two games on the Atari - Red Max and BMX Simulator. They are both graphically excellent, sonically superb and packed with playability. So it came as a welcome sight when I sotted the company's latest offering - Transmuter, a horizontally scrolling shoot-'em-up.

The story? Well, it seems that in the future the Sun becomes a red giant, and the extreme cold makes everybody go underground to keep warm. Up top, sentry robots and attack droids are kept in place to defence from possible invasion.

Time passes, and using Earth's resources, the remaining humans build ships and travel out to the stars, seeking a new home.

Settled in their new planet, people wonder what became of the Earth, so a single man is sent back to the home world in a new fighter carrying, at its core, a matter transmuter.

That is a device capable of transforming energy into separate forms for use in attack or defence.

You are that man, and on reaching the Earth you are attacked by the outer defences left a millennium ago. Activating the transmuter, you fly into battle - attack being your only chance of escape.

This story line coverswhat is actually a version of the Konami arcade game Nemesis. Yes, they're all there - speed-ups, missiles, double 45 degree shots, lasers, multiples and shields - all the features of Nemesis.

All except one thing - speed. And unfortunately all the snazzy features in the world can't help if a game is slower than the proverbial tortoise.

Once you complete a level, you are confronted with a mothership, just like in Nemesis. When this is destroyed, you have a bonus level with all sorts of starships flying at you.

Yet the game gets incredibly easy if you have speeded up firepower and two multiples, because nothing gets past you...

Graphically, Transmuter is not bad, with average sound and gameplay. Though it's slow, if you really are desperate to play Nemesis on your Atari, at £1.99 I don't suppose it'll burn that much of a hole in your pocket.

A not-too-bad version of Konami's Nemesis with average sound and gameplay.