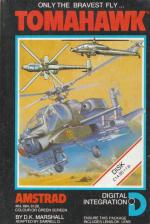 "OK Larry? Got the sandwiches and the orange squash?"
"Yes, but are you sure this is wise Mr President?"
"Oh sure, Larry. The Army have got lot's of helicopters. They won't miss this one for a few hours. Remember the chocolate cookies?"
"Yeah, but I'm concerned about the implications, Mr President ..."
"Don't worry Larry, I'll clean my teeth later. Now what does this lever do?"

With a deafening roar the chopper soared into the sky. The artificial horizon lurched and digital readouts tumbled on the control panel.

"Are you sure you can handle one of these things?" asked Larry as a tree zoomed past the cockpit window.
"Sure I can Larry. Didn't you see me in 'Uncle Sam beats the Commies'?"
"Wasn't the flying done by real pilots in that one, sir?"
"Say, you may be right, Larry. Doesn't the sky look green for this time of year?"

If you were thrilled by Digital Integrations' Fighter Pilot you will be even more thrilled by Tomahawk, It is a realistic flight simulator based on the Apache advanced attack helicopter used by the US Army. It uses 3D graphics in real time, drawing trees, tanks, mountains, buildings and towers.

To become an effective player of Tomahawk, you must first master the helicopter controls, then learn the tactics of ground attack, finally using your acquired skills in a full scale battle in which you must clear the occupied territory of enemy forces.

There are many controls for this game, as there are with most flight simulators. But once you have taken off, most of the action is controlled by joystick. You have throttle, rudder and rotor controls, a key to select the next of the three types of weapon, another that displays a map, one that changes the mode of your doppler radar and yet another that selects the next target or beacon.

I can't vouch for how realistic the controls and displays are, but there is just the right compromise. including enough control to make the simulation seem realistic yet be easy enough for a complete wally like me to be able to fly the thing.

On screen, the game is split into two, with most of the top part of the screen showing the view out of the cockpit window.

Enemy tanks, field guns and buildings are shown in red, while your own boys are in blue. All the objects displayed are 3D wireframe drawings drawn in scale, where trees will tower above you if you are at a lower height than the top. The graphics are, as you might expect, fairly basic, with objects taking simple shapes. In the lower half of the screen there is a control panel display. On the left is the TADS display showing the target that that you are aiming for, and underneath this is the throttle, collective, torque and revs indicators.

In a helicopter it seems to be wise to keep the throttle wide open all the time leaving the collective as the only other important control. The collective lever adjusts the angle of the rotors giving greater or lesser lift. Once airborne, you push the nose down with the joystick, and the angle of the rotors propel you forwards. A lazy player (like me) can get away with adjusting the height and speed to be fairly constant and then just use the joystick to control the chopper.

The usual flight simulator displays are there - fuel, height, speed, vertical speed, heading along with engine temperature, direction you are facing (you could be going sideways), direction to target, time to target, missiles, rockets, bullets remaining, and of course score.

Damage to various systems is shown also. The map. which can be called up at any point during the game, shows you a large area in blue (indicating friendly) and red (enemy). Only when you have succeeded in turning all the red, blue, do you win. Combat takes place against enemy interceptor helicopters and the various ground units, Any of three types of weapons can be selected. Machine guns, rockets and guided missiles. The guided missiles are great fun and take all the work out of blasting things to pieces but don't score as highly as the other weapons.

There are several modes and levels of play, just as there were in Fighter Pilot, The cloudbase can be altered, the type of mission, practice or combat also there is night flying using infra red vision as well as levels of difficulty. If you fancy yourself as a helicopter pilot, then this is the game for you.

What you perhaps don't realise is that Tomahawk actually consists of two games. One a helicopter simulator and the other is called Lenslok. This means screwing your eyes up, no doubt doing irreparable damage, to try and make out two letters which must be typed in before the thing times out.

You only get three lives, and I got a little worried when I got to my third and still hadn't got off the first screen. It's worth persevering though, because the second game is brilliant if you manage to get that far. I've always fancied myself as a budding Noel Edmonds and would just love to have a go at the real thing. However £10 on a computer game seems like a more financially manageable substitute until Radio 1 signs me up.

Unlike the Durell helicopter simulator, Combat Lynx, this one is quite flyable with only one pair of arms, two eyes and one brain ( well half a brain then). The ground detail is excellent even if the mountains are see-through (hidden line removal would have been just a little bit much), Just fly low and have a look at the trees or the purple (?) hangar.

Don't be tempted to have to close a look at the other helicopters though, the detail may be good but they are flown by Japanese kamikaze pilots. The heat-seeking missiles are a real dream though they do make it a bit easier than I would have expected in the real world (however DI are known for the realism in their simulators).

Anyway I have just had my scramble orders so must dash. Hope to see you in the air soon (if you're not Japanese).

I doubt that anyone could top Tomahawk as a helicopter flying game, Combat Lynx may have been more accurate but this is fun. If you watch an experienced player you think that this is going to be really difficult, but when you sit down to play, joystick at the ready, you find that getting started is really quite easy. Going through the stages of flying, shooting and then planning a victory makes this an absorbing and rewarding game.

Brilliant! Hours and hours and hours of fun blasting tanks, guns and helicopters. This is one of the best games I've seen for some time. After playing this for a while I feel competent to leap into a real Tomahawk, zoom off and bomb some Libyans. Surely it isn't this easy!

That's the thing about a good simulation, you get an impression of what it's like to fly a real aircraft. Tomahawk can be played at two levels one in which simple mastery of the controls allow you to 'zap the baddies', the other in which you learn to use the controls to the full and do some of the amazing flying you see on the telly all the time.